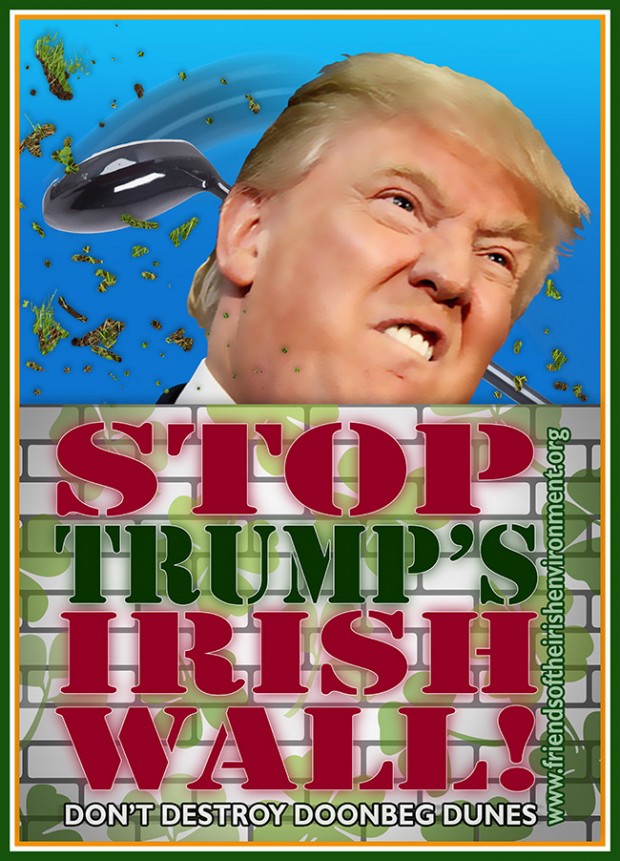 ‘I got Doonbeg because I have a lot of cash,’ Donald Trump told me when he called me on the phone to offer his support for our opposition to a wind farm near Doonbeg

This very expensive global warming bullshit has got to stop’

THIS “very expensive global warming bullshit” is coming in at €10million for Donald Trump, the multi-billionaire property tycoon and US Presidential candidate who purchased the Doonbeg Golf Resort in County Clare in 2014. That’s what it will cost to construct a 3km wall 5metres high of two-tonne limestone blocks along the dune face to prevent his golf course washing away.

Trump picked up the property when owner Leonard Long, of the Kiawah Golf Course in America, retired in 2009. Financial complications triggered a lawsuit within the family that ultimately ended with Doonbeg going into receivership.

“I got Doonbeg because I have a lot of cash,” he told me when he called me on the phone shortly after he bought Doonbeg, reportedly paying €12million for a property once valued at €55million. Aside from being a climate sceptic, Trump is also a hater of wind farms and called to offer his support for our opposition to a wind farm near Doonbeg. Our concerns were, however, the sensitive location – not the function –  and the offer was refused.

Trump came fresh from abandoning plans to build a second 18-hole golf course as part of his Scottish development when Scotland authorised a nearby offshore wind farm. In a fit of pique, he came to Ireland instead.

Trump first ordered the structure to be built in February 2014. As the lorries arrived and dumped the first of the two-tonne limestone blocks in the public parking lot, council officials and National Parks & Wildlife officers had a confrontation that led to Clare County Council serving a warning letter to Trump.

A subsequent letter from Trump’s solicitors to the Council threatened that any obstruction of works “vital to the survival of the business, will force our client to hold you responsible for any resulting damages and/or loss to property, including lost income, business, and the livelihood of our many employees who depend on a fully operational 18-hole facility”. 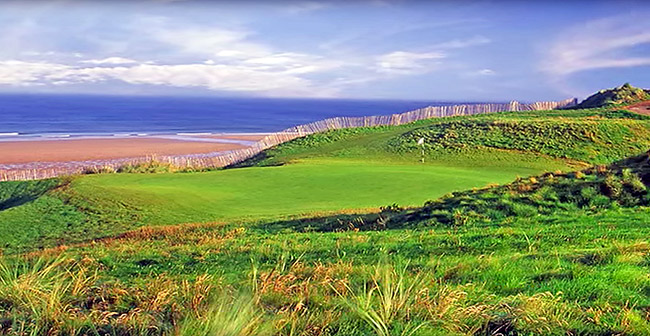 Trump’s ‘Irish Wall’ (he also plans to build a wall in the United States between Mexico and Texas to keep out immigrants) would kill the dune system which has evolved at Doonbeg over thousands of years, effectively creating a sand box in which JCBs can make a playground for the super-rich.

The wall would deflect the storms instead of the dunes absorbing them, scouring the beach through longshore drift. 500,000 tons of sand remain on the beach throughout the year but 700,000 tons shift through the actions of the sea and the seasons. The wall would change the dynamics of the unique ecosystem of shallow reefs and cobble beach that make it one of the finest surfing spots in Ireland.

RTÉ Prime Time (which ominously redacted the presence of the Minister for Finance at the lavish greeting for Trump’s arrival at Shannon Airport previously reported in all the media, including its own news programmes!) reported that there were more than 90 under-bidders at the sale. Some of these were locally based and willing to work with the National Parks & Wildlife Services to develop a course that would work in harmony with one of the last great dune systems on our west coast.

Clare County Council has produced a comprehensive Request for Further Information that raises all the issues, including the Parks & Wildlife Service’s legally-binding ‘Conservation Objectives’ which require that “the natural circulation of sediment and organic matter” must be maintained “without any physical obstructions”.

“Further information is required,” according to the Council letter, “to show how the structure will not form a physical barrier between the beach and the dunes.”

As Trump himself says:

“In the end you are measured not by how much you undertake but by what you finally accomplish.”

For both of Trump’s walls, the courts will probably end up making that call.

Tony Lowes is Director, Friends of the Irish Environment