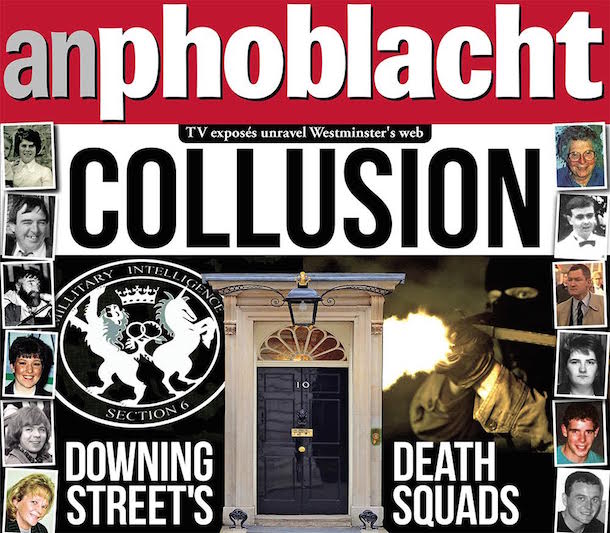 AT THIS TIME, 22 years ago, Ireland was ten weeks away from the declaration of the IRA’s first unilateral ceasefire.

At the same time as this blog is being written, 22 years ago, six men were going about their own business. They may even have already decided to go to the Heights Bar the next night to watch Ireland play in the European Championship.

One man, Adrian Rogan, was on his way home from a family holiday.

That night a unionist death squad entered the Heights Bar and emptied the magazine of a VZ58 assault rifle that had been imported by the British security services to rearm death squads under their control.

Unionist paramilitary state agents had imported a consignment of weapons into the North in 1987/88 specifically to increase the killing capacity of the unionist death squads, primarily the Ulster Defence Association and the Ulster Volunteer Force. The importation of weapons (including VZ58 assault rifles such as those used at Loughinisland) and other munitions was organised by the UDA, UVF and Ulster Resistance. 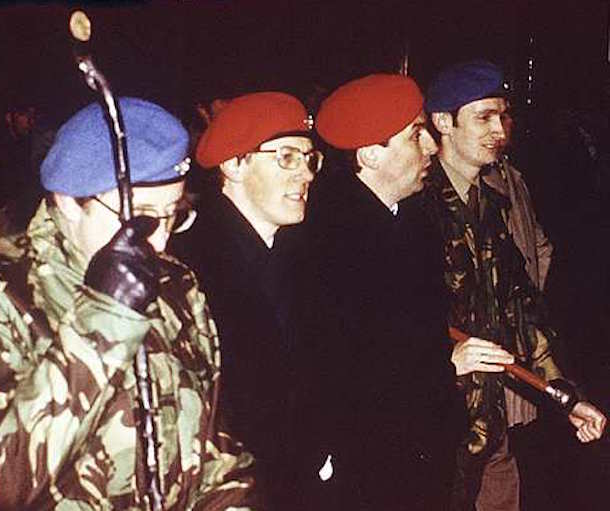 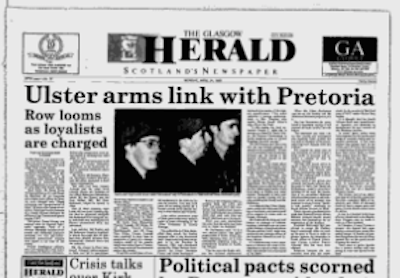 The formation of a new paramilitary group in 1986, known as Ulster Resistance, played a very significant role in the weapons procurements which the British state security services enabled.

The killings at Loughinisland were not an aberration. They were integral to an immediate military and political objective set by the security services – to try and frustrate the potential of an IRA unilateral ceasefire being announced and, as a result, the single most decisive contribution to the development of the Irish Peace Process.

The strategic sub text to the sectarian massacre of the six Catholic men in Loughinisland was to undermine the embryonic Peace Process.

Niall Murphy is a renowned human rights lawyer who has represented the Loughinisland victims’ families. He said what I was thinking when he compared the nature of these killings to the work of death squads in Guatemala and El Salvador.

The Heights Bar massacre and many other killings in the 1970s, 1980s and onwards were characteristic of the state-sponsored assassinations carried out by the right-wing regimes in Latin America in the 1970s and 1980s.

During that period, the US-sponsored governments organised, armed and directed death squads.

These operated at arm’s length from the official state forces, which themselves were involved in widespread assassinations, torture and repression.

From the very beginning of the last phase of political conflict in Ireland, those in charge of the British military and security establishment began using a range of counter-insurgency tactics which had been pioneered in other colonial conflicts such as Kenya and Aden since World War Two. 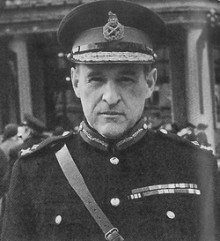 Brigadier Frank Kitson (pictured) was the personality most associated with this British counter-insurgency strategy against the Northern nationalist population and the rise of the IRA’s armed struggle.

He helped to develop an integrated political, military and legal doctrine that would oversee Britain’s war in Ireland. From the beginning that included use of the internment and torture policy; the recruitment of counter-gangs (death squads) within nationalist areas to target republican activists and ordinary civilians; intelligence and psychological operations; and, the deployment of clandestine military units and special forces (such as the SAS) alongside conventional combat troops.

Kitson’s doctrine left an enduring influence on British military and security policy towards the North. By 1982, he had been promoted to rank of general and became overall “Commander-in-Chief, UK Land Forces”.

The Hillsborough Agreement in 1985 signalled a qualitative step-change in British policy under the political direction of Prime Minister Margaret Thatcher. The British and Irish governments sought to politically neutralise the electoral rise of Sinn Féin by promoting and investing in constitutional nationalism. Simultaneously, the British security services and military began to systematically infiltrate and reorganise existing unionist paramilitary groups such as the UVF and UDA.

They were also instrumental in the formation of Ulster Resistance.

New shadowy military intelligence agencies such as the Force Research Unit (FRU) were deployed to the North under the command of Brigadier Gordon Kerr (pictured below).

The clandestine FRU became central to the recruitment of agents and running of military, political and psychological operations during the late 1980s and 1990s. Its motto was “Fishers of Men”.

The FRU had a prolific influence in the running of unionist death squads. That influence led directly to their reorganisation and rearming with weapons from apartheid South Africa in the late 1980s; the exponential increase in the number of political and sectarian killings being carried out; and, also the extension of their range of targeting through organised collusion with the RUC Special Branch, the British Army’s Ulster Defence Regiment, and British Intelligence itself.

Approval for all these decisions – including the policy of systematic assassination of Sinn Féin elected representatives and party members during the 1980s and 1990s and other civic and human rights advocates such as  Pat Finucane – were taken at the highest levels of the British state.

State-sponsored collusion and assassination in the North was never an illusion – it was a British state policy.

In February this year, Secretary of State Theresa Villiers gave a very important insight into the systematic nature of that policy when she publicly dismissed the fact of British state collusion in running unionist death squads as a “pernicious counter narrative”.

Since then, the British Government has repeatedly refused to support the mechanisms agreed for dealing with the past under the Stormont House Fresh Start Agreement by imposing a veto on maximum information disclosure under the pretext of “national security”.

Significantly, Theresa Villiers, on behalf of the British Government, refused to withdraw her February statement and apologise for it (and specifically to the Loughinisland families) after the Police Ombudsman’s report into the inquiry of their loved ones’ killings was published.

That’s because the same powerful sections of the British security and military establishment which directed Britain’s ‘dirty war’ in Ireland still exert a huge influence.

They haven’t gone away.

Those who were always hostile to the Peace Process within the British Ministry of Defence and security services in Whitehall are still politically and psychologically at war with the Sinn Féin leadership.

They are responsible for the current impasse in relation to dealing with the past because they are determined to conceal the reality of British state collusion, assassination and systematic illegality.

According to their zero-sum view, the British state would have too much to lose. For them, legacy issues represent a new battleground.

Twenty-two years after the Loughinisland massacre, those who tried to wreck the potential of the first IRA cessation are still trying to undermine the Peace Process. The British security services are directly involved in promoting the sustained black propaganda strategy, aimed at vilifying and undermining the current Sinn Féin leadership.

The war is over. However, some in Britain’s military and security services have still to embrace that reality.

The legacy of Britain’s dirty war continues to cast a poisonous shadow over the Peace Process and the work of continued democratic transformation in the North.

Those who remain opposed to peace and democratic political processes must not be allowed to succeed.

An international and national political campaign is now required to bring maximum political and diplomatic focus on the British state’s role in collusion during the conflict and its opposition during the Peace Process to help to finally deal with the legacy of the past. 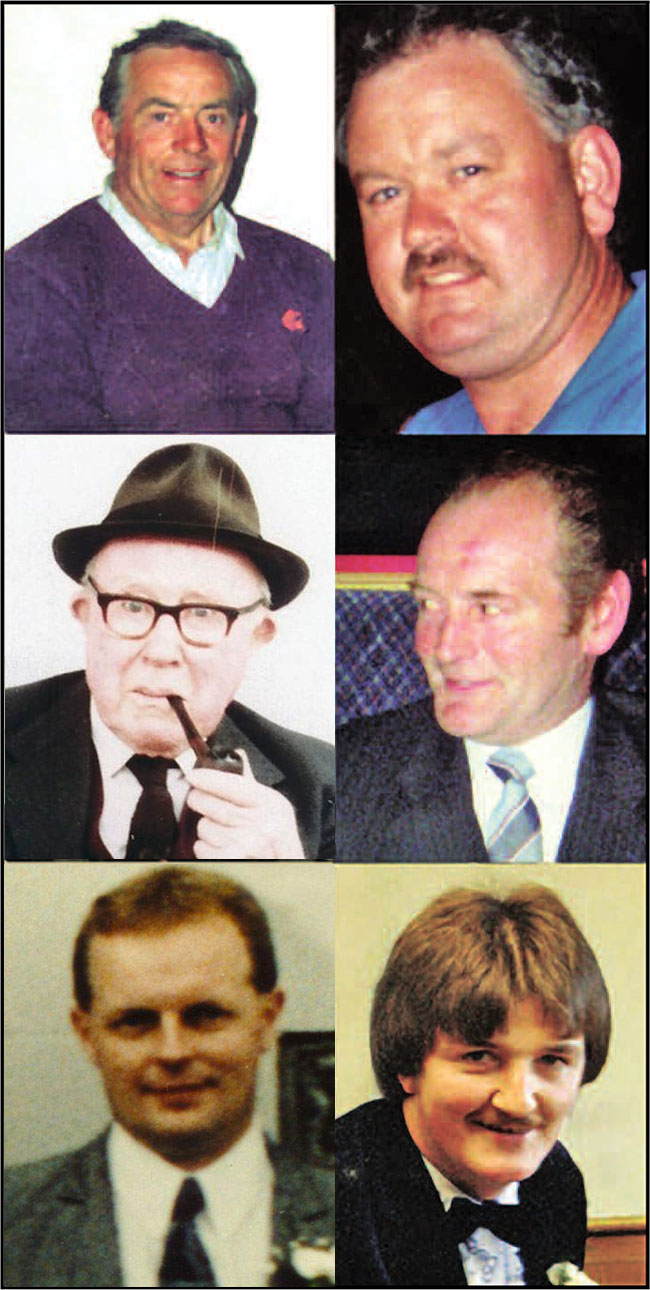