British Government still failing to face the past

Conservative Party minister Theresa Villiers was under pressure over her statements that Westminster will not disclose information on the past actions of MI5, the British Army or the RUC, especially involving collusion with unionist death squads

THE FAMILY of Pat Finucane was attending the annual Pat Finucane Anniversary Lecture in Belfast on Thursday 11 February,  the eve of the 27th anniversary of the assassination of human rights lawyer Pat Finucane by a unionist death squad operating with British Government agents within its army and police. At the same time, and in the same city, British Secretary of State Theresa Villiers was trying to throw a smokescreen around the British Government’s refusal to step up to the mark in dealing with the past.

Conservative Party minister Villiers was under pressure over her statements that Westminster will not disclose information on the past actions of MI5, the British Army or the RUC (particularly in relation to collusion with unionist pro-British death squads) due to “national security” interests. She consequently used her University of Ulster speech to deflect attention away from revelation after revelation which have shredded Britain’s  portrayal of its role in the North as ‘honest broker’ by dismissing crimes by its forces as the actions of some proverbial ‘bad apples’.

Villiers claimed in her speech that she was challenging the “pernicious counter narrative” that sought to “displace responsibility from the people who perpetrated acts of terrorism and place the state at the heart of nearly every atrocity that took place . . . be it through collusion or misuse of agents and informers”. 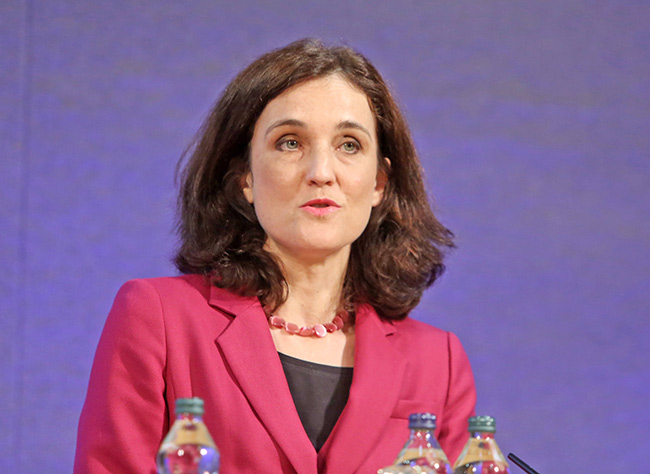 Her rejection of the evidence that problems with inquests stem from lack of commitment on the part of the Government or the police was itself dismissed as contrary to the evidence.

In her most disingenuous remarks, Villiers asserted that the British Government and its agencies were willing to “give full disclosure of all relevant documents to the Historical Investigations Unit without any redactions . . . that is everything . . . all we have which relates to the cases HIU will investigate”.

In what can only be seen as ‘felon setting’, however, Villiers added the proviso that the dispute is not about whether the HIU will have access to all the information it needs. It will, she claimed but added ominously: “The dispute is about onward disclosure from the HIU.”

Is the British minister implying that the families or their representatives will put people’s lives at risk? 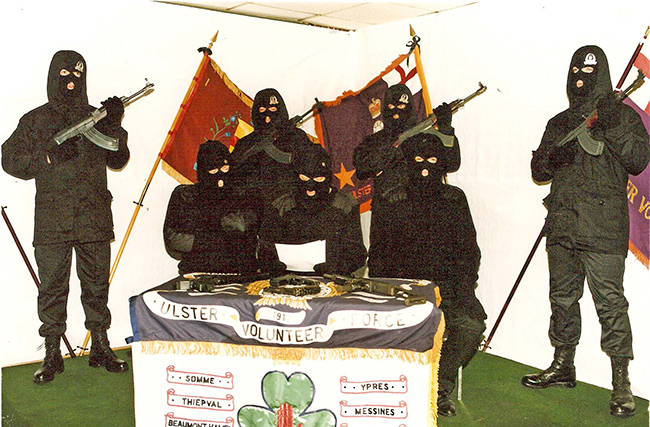 • Westminster says it will not disclose information on past actions by MI5, the British Army or the RUC – particularly in relation to unionist death squads

The two internationally-renowned human rights lawyers who were the main speakers at the Pat Finucan Anniversary Lecture – Frank La Rue, a human rights lawyer from Guatemala and a former UN Special Rapporteur on the Freedom of Expression; and Paul Seils, a Scottish human rights lawyer and Vice-President of the International Centre for Transitional Justice in New York – were both dismissive of the British argument that “national security” is a justifiable argument for withholding information from families.

Accusing the Secretary of State of trying to block the release of documents from the Public Records Office,which are already widely available, Sinn Féin MLA Gerry Kelly scoffed at her “bizarre claim that disclosing such information could compromise security despite the fact that many legacy cases are more than 40 years old and the issue of protecting current methodologies has been dealt with, as outlined in our two options papers presented to both governments”.

The even more outlandish claim by the Tory minister that HIU information could go to “Islamist terrorists who want to attack our whole way of life” was answered by Brian Gormally, Director of the Committee on the Administration of Justice, who said:

“The Secretary of State’s arguments do not match her demands. She wants a blanket national security veto to be exercised by a politician like herself. That is disproportionate and contrary to human rights.” 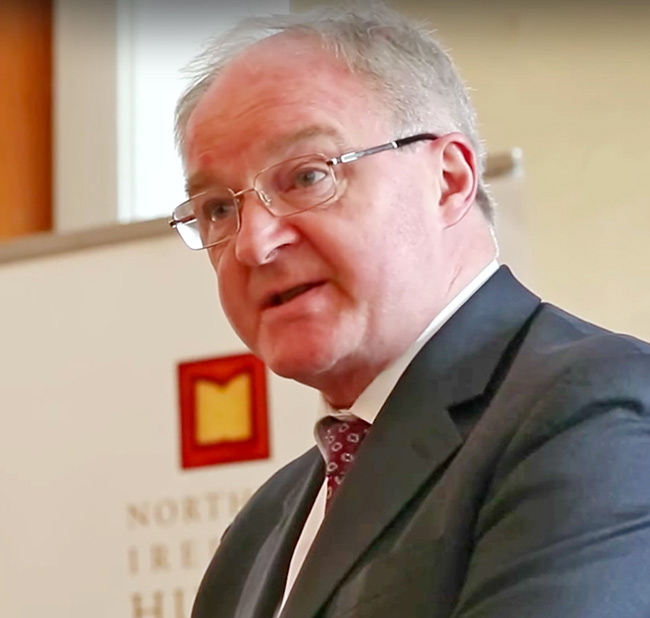 THE NORTH’S most senior judge is to set up a specialist unit to deal with dozens of controversial conflict-related inquests that are long overdue.

Lord Chief Justice Sir Declan Morgan made his announcement during an unprecedented meeting with the relatives of people killed in the conflict.

Accompanying him were the recently-appointed Presiding Coroner Justice Adrian Colton and Sir Reginald Weir, whose review of 56 inquests involving the deaths of 97 people has just concluded.

During his review, Judge Weir was scathing in his criticism of the British Government and in particular the Ministry of Defence whom he accused of “thumbing their nose” at coroners presiding over conflict-related inquests involving the British Army.

During the hearing on 29 January in Belfast into the SAS killings of the four IRA Volunteers in Clonoe, County Tyrone, in February 1992 – Kevin Barry O’Donnell, Seán O’Farrell, Peter Clancy and Patrick Vincent – Lord Justice Weir voiced his frustration over the refusal of both the British military and the PSNI to produce information for the courts, the families of the men and their legal teams as well as their continual foot dragging designed to delay the legal process.

The court was told that the issue of the security vetting of papers between the Ministry of Defence (MoD) and the PSNI was one reason why inquests were being stalled.

Judge Weir also pointed the finger at the British Government’s refusal to provide the finance to fund inquests:

The inquest system, he said, “is obviously very low on their list of priorities”.

The judge also expressed concern after it emerged that video footage of the scene of the SAS ambush site was being sold at a “loyalist market”.

At an earlier hearing into the unionist killing of IRA Volunteer Gerard Casey after it emerged that the MoD “may have found documents connected to the shooting”, Judge Weir exclaimed in frustration at the lack of co-operation or professionalism:

“I am not asking someone who owns a sweet shop to deal with this. I don’t understand how you people work.”

Sir Reginald Weir’s review was announced by Lord Chief Justice Sir Declan Morgan in October 2015, just a month before he was appointed President of the Coroners’ Courts.

Sir Declan said he wanted to assure the families of those who were killed that he was “fully committed to doing all that I can, within my sphere of influence and with the resources at my disposal, to ensure that justice is delivered”. 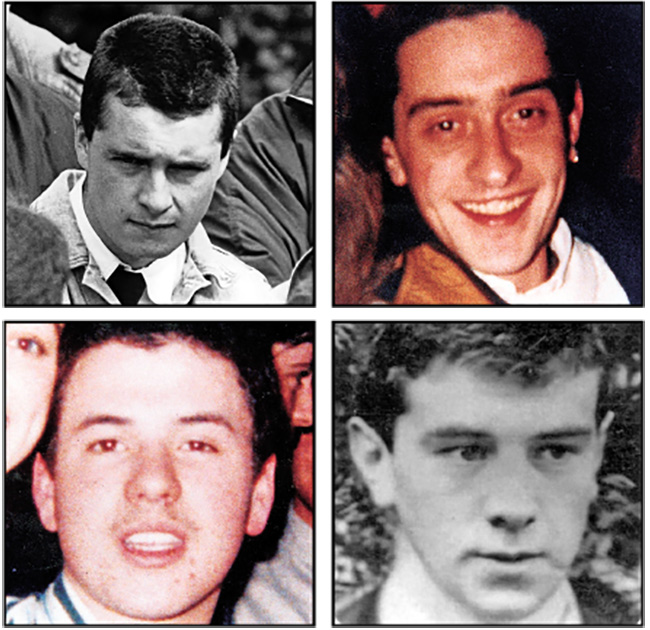 He also warned, however, that it could be “many years” before most of the cases could be dealt with.

A mere nine legacy cases have been heard during the course of the past five years – 13 cases in total in the past 10 years.

In November 2014, Sir Declan warned that inquests into deaths involving allegations of state collusion and cover-up could go on until 2040 unless the coronial inquests system was changed.

Running parallel with Justice Weir’s review is the continuing controversy over the question of how to deal with the past.

Hopes were high that a mechanism to deal with legacy issues would have been agreed in the latest round of talks that resulted in the signing of the ‘Fresh Start’ document in December last year.

Families and advocacy groups such as Relatives for Justice and the Pat Finucane Centre expressed their disappointment and anger over the failure to reach agreement, especially as the mechanisms built around the Historical Investigations Unit for  a truth recovery process were largely in place since the parties agreed them as part of the 2014 Stormont House Agreement.

The possibility of progress being made was scuppered by the British Government who insisted that their “national security” interests would trump all others.

Writing in September 2015 in reply to the NIO’s policy paper on the SHA, Daniel Holder, Deputy Director of the Committee on the Administration of Justice, said:

“The Stormont House Agreement is crystal clear that the planned Historical Investigations Unit which will take on legacy investigations into Troubles deaths will be ‘independent’ of everyone else, including Government.

“The United Nations Human Rights Committee as recently as July reminded London it needed to ensure the HIU was independent, and singled out the area of ‘disclosure’, which refers to what information the HIU is to have powers to get hold of, but also what it is then allowed to do with it.”

Holder maintained that Villiers was also intending to set aside “the normal line of accountability to the Policing Board” if she deems an issue of “national security” is involved.

The question that needs to be asked is whether Villiers’s views from last September indicate that, come hell or high water, the British Government always intended to play the “national security” card to prevent an open and thorough examination of the past, and particularly its own central role.

Sinn Féin National Chairperson Declan Kearney responded to Secretary of State Villiers by rejecting her statement that there is a disproportionate focus on state actions.

“Theresa Villiers’s speech at the Ulster University has deepened, not lessened, the impasse stopping progress on dealing with the past.

“The fact is that the British state has tried to absolve and distance the actions of its forces and agents from having any responsibility for the conflict and the suffering experienced by all sides.

“Lifting a block on information about the actions of state forces and agents over 40, 30 or 20 years ago poses no threat to British national security by any definition.

“There is no actual or arguable way in which disclosure about the involvement of British soldiers in the Ballymurphy Massacre; the role of unionist paramilitary state agents in the Dublin/Monaghan bombings; or the assassination of Pat Finucane by unionist state agents could undermine British national security in the present-day geopolitical context.

“The national security pretext is about trying to keep the focus of information disclosure away from Downing Street and the most senior levels of British state decision making.”