Dáil election 2016: The two-party system is over 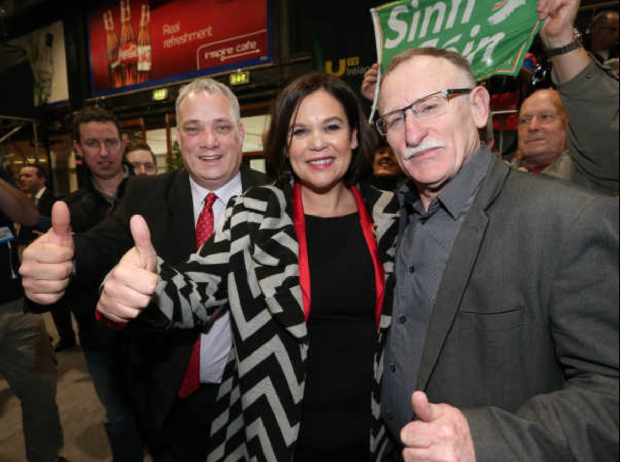 DRIVING towards the RDS along the tree-lined Ailesbury Road – the second–most expensive square on the Irish Monopoly board game – it's clear that the 1% are behind Fine Gael. Billboards with Fine Gael TD Eoghan Murphy's face stare out above the hedged gardens. Twenty minutes earlier, I had passed similar billboards for Sinn Féin along the N81 but they stood in the gardens of council estates on the fringes of the sprawling suburb of Tallaght.

Within the first few minutes of ballot boxes opening it became clear that the wrath of working-class communities, battered by austerity, was being wrought on the Labour Party. The Golden Circles, insulated by their pals and patrons in Fine Gael, had remained loyal to the Blueshirts. Others who had backed Fine Gael simply to get Fianna Fáil out have now scattered elsewhere, mainly to Fianna Fáil and Independents of varying hues, from Left to Right to Self Centred.

Labour TD Eric Byrne (a former TD for the Workers' Party although this is not mentioned in his Labour bio) was to be the first casualty of the Labour rout. Not even an hour into the tallying and he was already conceding to his dejected-looking tally team that he was out. The former Stalinist stalwart – famously branded a “dickhead” by Sinn Féin TD Jonathan O'Brien following Byrne's flippant and personally nasty remarks regarding homelessness – was facing certain electoral annihilation. His uncaring and unsympathetic attitude to such a serious social issue epitomises how the Labour Party has lost sight of its core values in its lust for power.

For all the media buzz, the imitation Tories of Lucinda Creighton's and Eddie Hobbs's Renua were in serious trouble. The party's head of media, republican-baiting former Irish Independent journalist John Drennan, stormed around the count centre like a bull as it became evident his stint in politics was coming to an end and his party would go down in history as the shortest-lived Irish creation since Guinness Light. The booing and jeering that greeted leader Lucinda Creighton on her arrival was a microcosm of just how nasty this election was.

The first Sinn Féin result to come through wasn't from the RDS. It was from CityWest and the count for Eoin Ó Broin in Dublin Mid West. After weeks of vilification in the media and laughable claims that the party is “soft on crime”, it was fitting to see the party top the poll ahead of Fine Gael Justice Minister Frances Fitzgerald.

There's no denying that Fianna Fáil are back. But they are nowhere near the levels they once enjoyed. And if anybody thinks that they can expect anything different from Fianna Fáil they need look no further than the arrival of their successful Dublin Bay North candidate, Seán Haughey, to the count centre. The son of Charles Haughey and a former Minister of State in the disastrous Fianna Fáil Government of the crash, he eclipsed his baggage-free running mate, Deirdre Heney.

Unfortunately for him, his chat with the media announcing the Haughey dynasty's glorious return to the Dáil was drowned out by cheers as Dublin Central poll-topper Mary Lou McDonald marched in. Despite Fianna Fáil's gains across the state, Bertie Ahern's once impenetrable stronghold of Dublin Central remains a 'Fianna Fáil-free' zone. The people of that mainly working-class constituency have never forgiven them.

As we face into weeks of uncertainty and the two Civil War parties shadow-box with each other, one very obvious message has emerged from the general election – two-party domination in the South is gone.

Fianna Fáil's and Fine Gael's refusal to enter into a coalition government with each other is not due to a historical quirk. They know very well that such an arrangement will expose them for all to see as ideologically identical parties of boom and bust politics.

There is still not a clear Left/Right divide in the politics of the state but it is getting ever closer. The large vote for Independents and smaller parties shows that there is a huge chunk of the electorate who no longer have any time for Fianna Fáil or Fine Gael. It is up to Sinn Féin to use its increased mandate to convince people that it is a viable alternative.