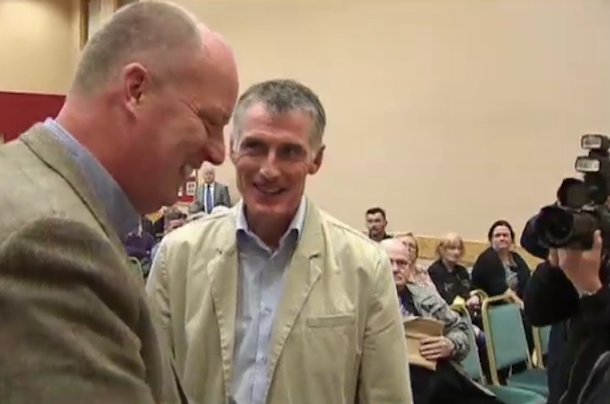 RECONCILIATION, healing and forgiveness are needed to free society from the pain of the past, Sinn Féin National Chairperson Declan Kearney said at a Gasyard Féile event in Derry on a panel including PSNI Chief Constable George Hamilton just days after the PSNI's disputed statements claiming the continued existence of the IRA.

Other panellists were Patricia McBride (former Victims Commissioner) and Alan McBride (whose wife was killed in the 1993 Shankill Road IRA bomb) and Catherine Pollock, who chaired the discussion and Q&A.

The Sinn Féin senior figure acknowledged the loss suffered by all sections of the community and stressed there can be no hierarchy of victimhood or humanity.

This is the full text of Declan Kearney's address:

ALL WARS cause devastating loss and suffering.

This time 100 years ago the unimaginable horror of World War One was taking place.

Within 30 years, a new war consumed Europe and the world.

That ended 70 years ago but not before the carnage of Belsen and Auschwitz, and bombing of Dresden, Hiroshima and Nagasaki.

No distinction can be drawn between the sufferings caused in war.

No war can be romanticised or glorified, regardless to the context.

No right-thinking republican has ever glamourised war, or indeed the actions of the IRA, in this or any previous generation.

The Good Friday Agreement drew a line under political conflict in Ireland.

Despite their imperfections, the peace and political processes have transformed this place.

But the legacy of our past still casts a long shadow.

Many families on all sides and across Ireland and Britain continue to suffer.

Here in Derry, massive pain has been suffered, typified by Bloody Sunday, the Annie’s Bar massacre, and killings of five British soldiers and Patsy Gillespie at Cosquin.

Regrettably, that pain cannot be undone, nor responsibility disowned by Irish republicans or anyone else.

However, the absence of war is not enough.

Unless we make reconciliation, healing and forgiveness our future, society and politics will remain trapped in the pain and resentment of our past.

Embracing that challenge will require courage and opening our minds and hearts to the need for respect, generosity, forgiveness and trust.

Some sections of our society (and other agencies) oppose that vision. They don’t want to deal with the past and would prefer reconciliation became a new battle ground.

However, all hurt is the same and warrants acknowledgement with sincere remorse.

Expressing remorse and regret for death and injury could help deepen mutual respect and move us all closer to a healing process.

That should not be confused or devalued with seeking the repudiation of political allegiance.

In doing so, painful and uncomfortable compromises will need to be considered.

It was only through compromise that Europe developed a relationship with its history to avoid pain being recycled for future generations.

The mechanisms proposed by the Stormont House Agreement to deal with legacy issues are the compromise to deal with our past at this time.

Each mechanism must be implemented.

If supported by all sides, its template provides a way forward.

To paraphrase Tom Barry 50 years ago in Cork, we should end futile recrimination about past events.

I acknowledge without exception the loss and pain of all sides.

I regret none of it can be undone.

I am sorry for the pain experienced by the RUC family during the war, the suffering caused to the unionist section of our community (the human tragedy of the Shankill Bomb, being one instance of that), and, equally, for the pain of the families of IRA Volunteers killed here in Derry and elsewhere during the war as well as many nationalist civilians who were killed and injured.

There is no hierarchy of victimhood or humanity.

Our challenge is to decide whether we can forgive but not forget, mindful of Mandela’s words:

“Courageous people do not fear forgiving for the sake of peace.”

For many years I and the Sinn Féin leadership have called for an initiative of common acknowledgement by all sides for the pain caused as a contribution to forgiveness and healing.

It would require great grace and generosity from everyone.

In that spirit, I welcome PSNI Chief Constable George Hamilton’s remarks at the West Belfast Féile on the benefit of a collective acknowledgement of the pain caused by our past.

This would indeed be a powerful expression of shared commitment that it should not happen again.

None of us have anything to fear from reconciliation and healing.

Sinn Féin is committed to supporting a coalition for reconciliation across our society to take that vision forward.

Whatever political difficulties and challenges we face in the days and weeks ahead, healing our society needs placed above the political process.

But it will mean:-

● Confronting our fears of each other;

● Having the humility to acknowledge the pain on all sides;

● Compromising to unlock the legacy of our past;

●  And having the courage to forgive for the sake of our children.