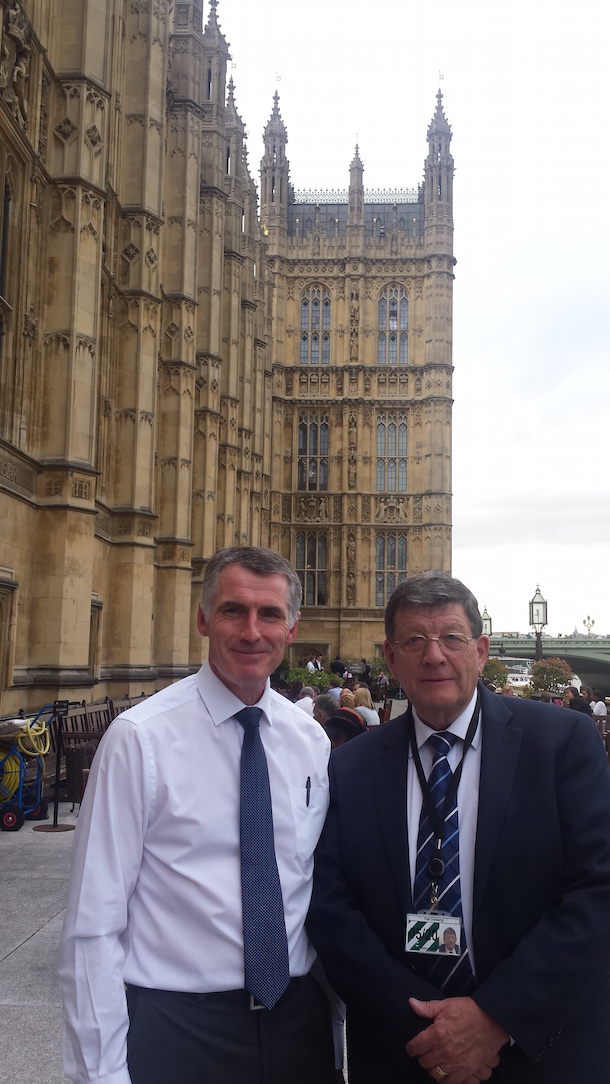 The event – based on the 'Uncomfortable Conversations' series of articles carried by An Phoblacht – was chaired by Professor Mary Hickman, St Mary's University College.

This is what Declan Kearney said in his speech.

All wars and political conflicts create carnage and suffering.

One hundred years ago, the unimaginable horror of World War One was unfolding.

It was described as “the war to end all wars”.

Yet, within 30 years, a new world war had erupted and it too caused colossal devastation and suffering. World War Two included events like the blitz of London, and the mass atrocities at Auschwitz and Belsen.

Last May marked the end of that war in Europe 70 years ago. Three months before, in February 1945, the city of Dresden was carpet-bombed. It became another of the many horrific events which were part of the carnage of World War Two.

● Dresden after being carpet-bombed by the Royal Air Force

A play has recently been written about this particular episode in European history called After Dresden. A review of it said:

“Together the central characters ask each other painful questions. 'Is forgiveness possible? How does reconciliation happen? And can we ever recover the truth about the past?' It is more important than ever that we address these issues in a society that still has not healed.”

Such questions – and the compromises implied within them – are part of the 'Uncomfortable Conversations' which need to happen for reconciliation and healing to grow.

There is no distinction to be drawn between the carnage and suffering resulting from conflict.

No war can be romanticised.

Terrible devastation and human loss were caused by the political conflict in Ireland and Britain.

Victims were created by and on all sides – by republicans; the British state, its forces and agencies; and by unionists.

All sides were part of the conflict which occurred and continued.

IRA operations in this city resulted in many military and civilian fatalities and casualties as well as enormous commercial damage.

Regrettably, our collective past cannot be changed. Neither can it be disowned by republicans or anyone else.

Too many families from all sides, across Ireland and Britain, live with real and continuing pain. I am sorry that cannot be undone. No reasonable person could disagree that there are many things which we wish had been done differently or not at all.

This month marks the tenth anniversary of the IRA’s formal announcement to end its armed campaign and support the achievement of republican objectives of Irish unity and independence through democratic and political programmes.

The Good Friday Agreement was the catalyst for that transition. It is the definitive benchmark against which to measure change.

The absence of war, however, is not in itself enough.

The time has come for us all to develop reconciliation, promote healing and to embrace forgiveness.

That is a challenge which will be both difficult and painful because uncomfortable compromises inevitably need to be considered.

After two wars in 30 years, Europe had to compromise in order to find a relationship with its history and avoid recycling past pain for the future.

Courage will be required but, as Nelson Mandela said:

“Courageous people do not fear forgiving for the sake of peace.” 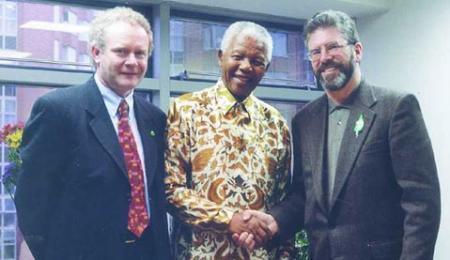 The fact is that the hurt caused by war still needs to be healed long after wars finish.

Now that the war which divided Britain and Ireland is over, we have to explore how new political and human relationships can be made.

That challenges us all to open our hearts and minds and embrace respect, generosity, forgiveness and trust. These must be the foundations of a shared future.

Reconciliation and healing must be our future, otherwise society and politics will remain trapped in the pain and resentment of the past.

However, a minority still oppose that vision.

In Ireland, North and South, and here in Britain, some believe that dealing with the past is a new battlefield.

They prefer endless recrimination to reconciliation and refuse to accept that reconciliation should be set above political agendas or allegiances in the greater good.

In his recent article in The Irish Times, Professor Richard English commented:

“Many pro-Union people were louder in demanding that republicans should give up violence and that they should respect Northern majority opinion than they have been to engage in meaningful dialogue with republicans once those crucial changes were brought about.”

This is why symbolic initiatives and political leadership supporting the reconciliation vision remain so important.

Given our history, such gestures should not be taken for granted. But, when carried out in a spirit of mutual respect and equality, these gestures and initiatives can provide hugely important examples for wider society.

There was great significance attached to the private meeting which followed the public encounter between Prince Charles sand Gerry Adams during the recent royal visit to Ireland. 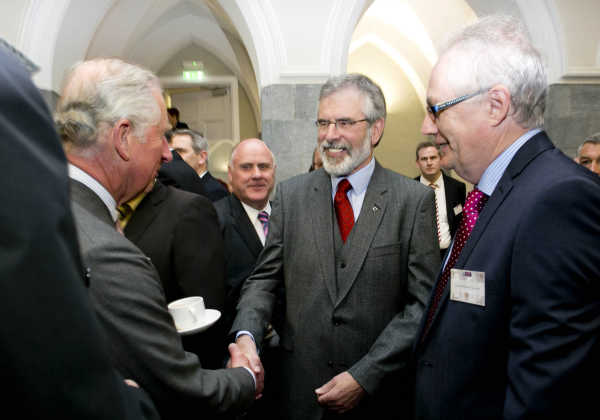 That meeting brought together Martin McGuinness and Gerry Adams, as the most central republican leaders of the last 45 years, with Prince Charles, the British royal figure most synonymous with the British military forces and imperial and military traditions of the British state and set to become the next British head of state.

Coming as it did in the context of Prince Charles’s own personal pilgrimage to Mullaghmore to remember his uncle, Lord Mountbatten, killed by the IRA, this meeting powerfully underlined the irreversibility of the Peace Process and our collective responsibility to open up a new phase based upon reconciliation.

It also symbolically gave expression to the multiple narratives about the past and was evocative of some (but not all) of the incidents which moulded the experience of our most recent conflict.

Importantly, this latest initiative happened not just because of the Sinn Féin leadership’s total commitment to reconciliation and healing but also because the British royal family and key elements of the British state had the independent foresight to recognise it represented another important opportunity to create positive forward momentum.

Queen Elizabeth has already made her own influential contribution to the Peace Process. The decision of Prince Charles to meet with Sinn Féin, repeat her words from 2011, and then offer his own words on regrets, resentment and attribution of blame, indicate the British royals are committed to developing authentic reconciliation and healing.

That sends a clear message to those who are hostile to this agenda.

There is a bigger picture.

Those who share a strategic vision for the future of the Peace Process must reach out to each other and make alliances for the greater good.

A coalition for reconciliation drawn from all sections of society and throughout Ireland and Britain needs to be formed to unlock a new phase of the Peace Process.

Nelson Mandela also referred to the importance of partnership in peace building:

No government or state system is monolithic.

There are always competing positions, both progressive and regressive.

Some sectional and political interests did not want the meeting between the Sinn Féin leadership and Prince Charles to take place.

That mindset is indicative of British Government policy towards the North over the last five years.

The reality is that the biggest threat to the viability of the political institutions and political process was the approach of the Tory-led coalition.

It reduced the North to a political backwater through negative mismanagement of the peace and political processes. The imposition of its austerity agenda has directly contributed to political instability.

No political process can flourish without a sustainable economic framework or the expenditure to meet society’s needs.

The worsening austerity crisis in the North is incompatible with the Good Friday Agreement. The ideologically-driven approach of this majority Tory Government is now putting it on a direct collision with the very basis of the Agreement.

The current British Government’s economic and political policy is pushing the regional economy and political process into a negative downward trajectory.

That can only have extreme and long-term adverse consequences, including potentially fatal repercussions for the Good Friday Agreement itself and the North’s relationship with Europe. 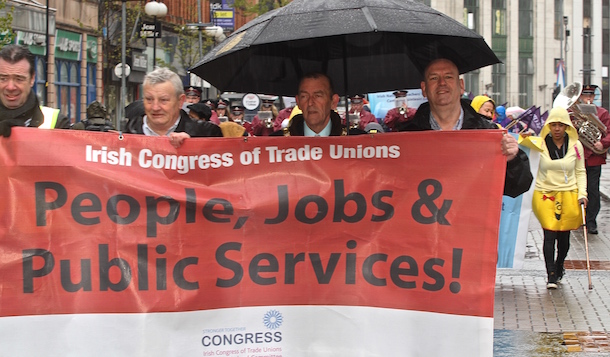 The question which all of that poses is whether such an outcome has become a calculation of this British Government’s policy towards the North.

Deeper political instability and increased polarisation will surely undermine the prospects for reconciliation and healing.

That must not be allowed to happen.

But averting such a scenario will also depend upon the strength, depth and momentum of an emergent coalition for reconciliation.

The North is still a society emerging from conflict carrying deep-rooted structural economic inequality and under-development, endemic sectarian division, the highest mental health problems and child poverty, and the lowest wage structure and living standards of any region in Britain or Ireland.

The estimated loss of £2.3billion from the regional economy between 2010 and 2018 will have catastrophic economic, social and political consequences.

The North requires a 'New Deal' to build a fair society.

There is a need for a new negotiation with the British and Irish governments. New time and space has now been created to address the issues which threaten political progress.

If that does not happen – and British Government policy does not change – we will run out of road.

That will create the conditions for an unprecedented setback.

The alternative is a new negotiation process which delivers a 'New Deal' – a sustainable, workable budget – and which also restores political stability and proper power-sharing.

A defining period now faces the political and economic future of the North. What emerges from that will directly influence the potential for opening up a new phase of the Peace Process based upon authentic reconciliation, healing and a fair society.