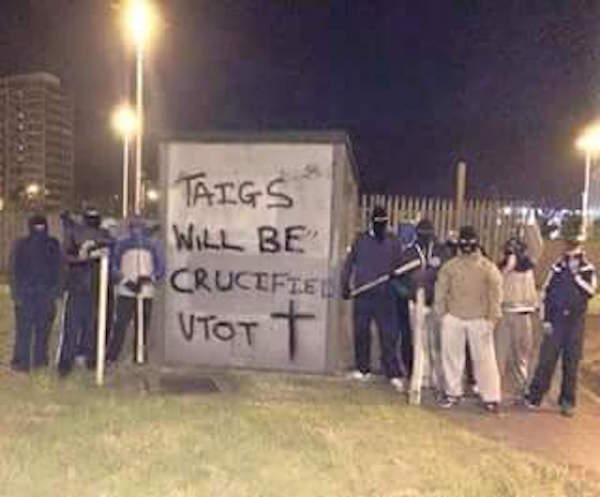 POLICE have been asked to urgently investigate an “extremely sinister” photograph on social media involving more than ten masked men close to the Broadway interface in Belfast wielding baseball bats and cudgels beside graffiti of a cross and the slogan “Taigs will be crucified”.

“VTOT” is a gang reference to 'Village Team On Tour'.

In the background is the Broadway Tower, one of three towers occupied by hospital workers and located near the Royal Victoria Hospital.

Fra McCann said he is forwarding this picture to the PSNI and reporting it as a sectarian hate crime.

“They need to investigate this image given the seriousness of the threat and appearance of masked men.

“I urge everybody in the vicinity to be vigilant.

“I would also urge loyalist and unionist political and community leaders to condemn this publicly and to do whatever they can to help any investigation into this.”