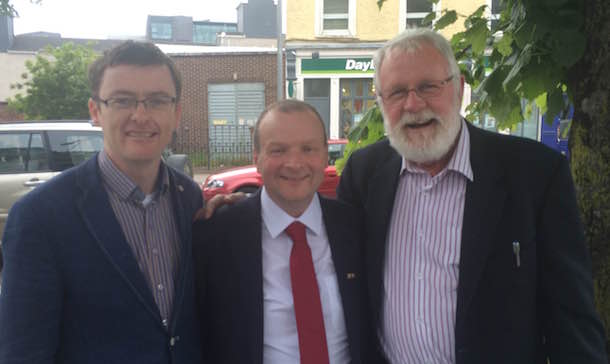 ● Chris O'Leary just before his election as Mayor of Cork, with Senator David Cullinane and Martin Ferris TD

THE REBEL CITY OF CORK has its first Sinn Féin Mayor in over 90 years with the election on Friday evening of Chris O'Leary. As well as being the post held by two iconic republicans – Tomás Mac Curtain and Terence McSwiney – the occasion was made all the more special by the fact that Chris's period of office takes in the centenary of the 1916 Easter Rising.

In his acceptance speech, the new Sinn Féin Mayor said that, because of the d’Hondt system being used by the council, this is first truly inclusive council in 40 years. Under this system each councillor from every party and none could potentially become Mayor, thus reflecting the true will of the Cork City electorate at the last local elections.

Chris O'Leary said during his inaugural speech as Mayor:

“We should remember that decent housing, education and employment are basic human rights. We should all hold the highest standards for these basic rights locally in our great city, nationally and internationally . . .

“For the next 12 months, I will work to present our great city in the best light possible. I will highlight its numerous positives while tackling the negatives in an honest and earnest way.

“I believe that we share the view that, after seven years of social and economic crisis, the people are looking for hope through positive and progressive politics.

“Those of us elected to this council, from all parties and none, have a responsibility to work together to make life better for the people we represent.

“I look forward to working with all members of this Council. I also want to work constructively with all councillors elected to deliver for the people of Cork of City.

“I want to be a mayor for all of the people of this city.”

Among his priorities for the year to “highlight the human impact of the ongoing housing and homeless crisis in Cork City” and to establish a Cork City Housing Stakeholders Forum.

“We are in the midst of the worst housing crisis in modern history. Almost 26,000 people across the city are on the waiting list. We now have families that are sleeping tonight in local hotels because they cannot afford the rent in private accommodation and the council is unable to house them.

“Since 2008 Government funding for social housing has been cut by 90%.

“The solution to the housing crisis is very simple – we need to build more social houses.

“As Ard-Mhéara, I pledge to use my office to highlight this crisis; to put a human face on the suffering of thousands of families who do not have a home of their own.

“I also pledge to promote meaningful solutions to this crisis.

“Local government must be able to meet the housing needs of the people. We need to have the money to build and buy more social houses.

“Our homeless services must have the funding required to support those without a home and to assist them to live independently.”

He also said he will focus on positively promoting the growth potential and attractiveness of Cork City as the city for employment creation, business development, education and economic perspectives.

“I will also strive to highlight the ongoing work of the community and voluntary sector and engage in a meaningful outreach initiatives with them in Cork City.”

Highlighting the Local Economic and Community Plan and how state development strategies should be utilised, employment,the need to encourage small businesses and start-ups “to ensure there is local economic activity to create a balance to foreign direct investment in the city”, and education (including higher education with UCC, CIT and the Cork ETB), he pointed to the Cork Local Government Review.

“The elected members of Cork City Council are unanimous that their preferred option is an independent city authority with extended devolved powers and an increased area to cater for Cork City’s growth over the next 40 years. Anything less will usher in the dissolution of the city council which has governed Cork in various forms since at least the 12th century.

“It is ironic and really disgraceful that the chamber which provided the platform for the supreme sacrifices made by Tomás MacCurtain and Terence McSwiney should now be threatened by demotion to a municipal district in around the centenary of 1916.

“The second largest urban area in this state requires strong independent government to address its challenges, not least of which is the concentration of resources on the east coast. It is important that people understand that the governance of the city is important, not least because the decisions taken will affect their lives.”

Thanking his family, friends and comrades in Sinn Féin and all those people who worked with him and Sinn Féin in ongoing campaigns as well as elections, Mayor Chris O'Leary ended:

“In 12 months' time, when looking back on my term, if I can honestly say that I have taken the Mayor’s role into the homes, communities and workplaces of those whom this office represents, then I will be a proud republican activist.”