'Anyone you see, you shoot-to-kill' – Israeli soldiers break silence on Gaza war crimes 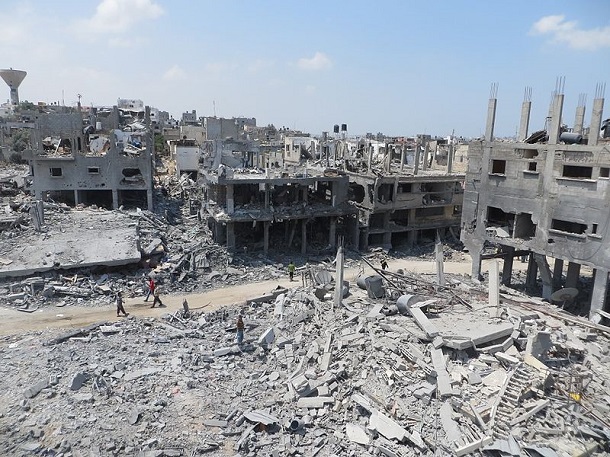 A REPORT by Israeli Army veterans organisation 'Breaking the Silence' reveals how soldiers were effectively ordered to shoot to kill anything that moves during last year's invasion of Gaza.

The document entitled This is how we fought in Gaza contains testimony from 60 soldiers and officers in the Israeli Defence Forces (IDF) who took part in the invasion of the beleaguered Gaza Strip last summer which left more than 2,200 Palestinians – mainly civilians – dead.

One Israeli Army Captain says he received no official instructions from his commanders as to what the rules of engagement were for his squad and essentially was told "anyone you see, you shoot"

A First Sergeant who was deployed to Gaza City told Breaking the Silence:

"The briefing on rules of engagement was [to open fire at] "anything you think you should...Anyone that you can spot that you can be positive is not the IDF".

He says that essentially everybody who was not an Israeli soldier was to be considered a target because there "wasn't supposed to be any civilian population there".

"The instructions were to shoot right away. Whoever you spot — be they armed or unarmed, no matter what. The instructions are very clear. Any person you run into, that you see with your eyes – shoot to kill," he said.

A Sergeant in the Mechanized Infantry speaking about the rules of engagement, said:

"Anything inside [Gaza] is a threat, the area has to be sterilized 'empty' of people".

Another soldier describes how a member of his unit shot an elderly civilian who approached their location because he feared he may be a suicide bomber:

"There was this one time when an old man approached the house... and the guy manning the post – he saw this civilian and he fired at him, and he didn't get a good hit. The civilian was laying there, writhing in pain."

He says none of the paramedics were willing to treat the man, believed to be in his 70s, for fear he was wearing a booby-trap:

He says when the incident was reported to a commander he was told:

"We have casualties up front, don’t bother us, do what you need to do."

Other soldiers describe using armoured bulldozers to destroy hundreds of homes while others whose units occupied Palestinian houses explained how they turned some of them into communal bathrooms for their soldiers as there was no running water to use toilets.

One Israeli First Sergeant even compared the Israeli Defence Forces destruction of the Beit Hanoun neighbourhood with the razing of Warsaw by the Nazis during World War II.

Soldiers were also instructed to use "provocation fire" on suspicious areas if they could not identify any targets. When asked what exactly a "suspicious area" was and within what range it could be defined, a soldier in a tank unit explained:

"Any range. In principle, any house that can see me, that’s within eyeshot of me, which could take me down – can be defined as suspicious."

Underlining how anything that moved was a target, he describes how his tank opened fire with its machine guns on an area in the distance after a soldier claimed he saw a small amount of movement – only to later discover that they had killed a cow.

The Israeli Defence Forces have already dismissed the report, saying Breaking the Silence has refused to provide any proof of the claims. However, Breaking the Silence director Yehuda Shaul (pictured) – who spoke with An Phoblacht in Dublin last year – said the organisation was happy to share materials and had written to Israel’s army chief of staff on 23 March asking for a meeting – but had received no response.