'Ireland: One Island, No Borders' – photographic record with words by Gerry Adams 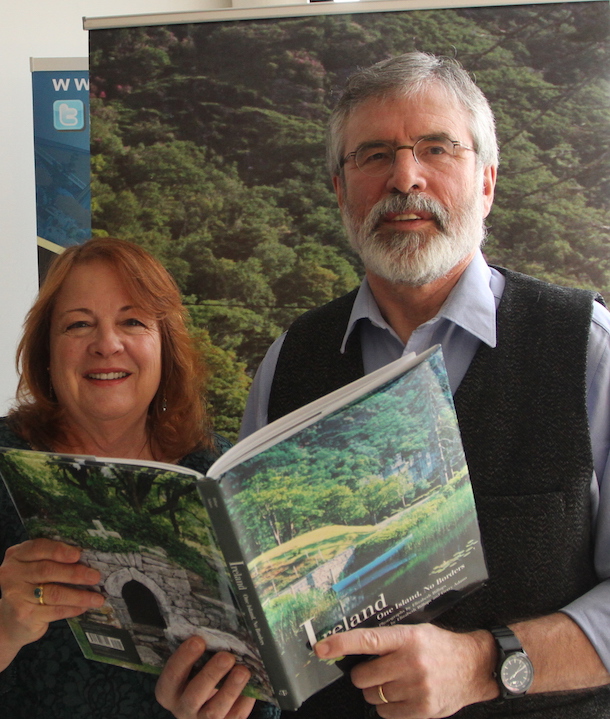 Elizabeth Billups and Gerry Adams with the book

THE VISION of an Ireland as one island with no borders is the concept for a book just published by Irish-American photographer Elizabeth Billups.

The US citizen travelled to Ireland over a 12-year period beginning in 1996 and recorded in photographs scenes and images that encapsulated Ireland in all its natural beauty as well as its people.

In the North, in particular, her photographs captured that period in history as society moved through the transition from war to peace.

And as her project unfolded, after two years, she approached Sinn Féin President Gerry Adams and convinced him to supply the text to her pictorial record.

The result, Ireland: One Island, No Borders, was launched in a series of events throughout the country during March with its Belfast launch on Saturday 14 March in Cultúrlann MacAdam Ó Fiaich as part of Seachtain na Gaeilge.

In her introduction to the book, Elizabeth says:

“At first I photographed the striking landscape but I quickly learned that, like every country, Ireland has environmental problems and serious political and social issues.

“I soon became immersed in the struggle for a united Ireland and my photographs became a visual record and reflection of the contradictions and paradoxes contained on such a small island divided by the imposed British border.”

She met the Sinn Féin President when she returned to Ireland as part of an Irish Northern Aid tour in 1999.

For his part, Gerry Adams, writing the epilogue, presents a historical and political overview that gives the project its context while at the same time summing up the aspirations of republicans for a united Ireland.

“We now have the opportunity to reimagine Ireland, an Ireland where conflict and violence are in the past, an Ireland that reflects our genius and diversity, our dignity and our strengths – one island without borders.”

● Ireland: One Island, No Borders is published by George F. Thompson Publishing.