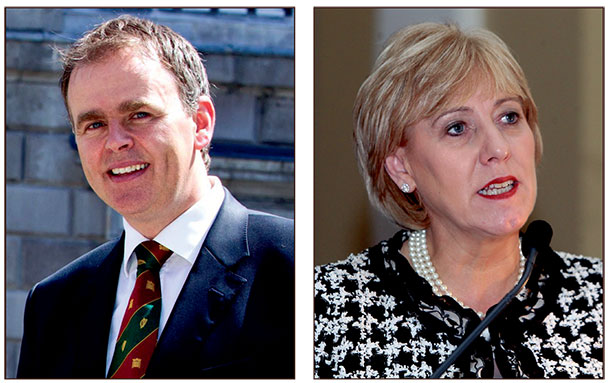 • Ministers in the Department of the Gaeltacht, Joe McHugh and Heather Humphreys

THE SHEER CONTEMPT for the Irish language on the part of this Fine Gael/Labour Government (and indeed at times an apparent blind hatred of it and its significance for a free Irish people) is becoming more and more apparent.

Neither of the two ministers in the Department of the Gaeltacht who have primary responsibility for Irish language matters can actually speak the language. (Minister of State Joe McHugh – a decent man in many respects – has, however, taken a crash course in the language that gives him enough to read out a speech.)

Even worse is the decision reported in the Irish Times by Harry McGee that Gaeltacht Minister Heather Humphreys has requested that the role of the language in the 1916 Rising, and the renaissance of the Irish people associated with it, should be downplayed and relegated to a minor position.

And at the recent Stormont House talks, the Irish Government representatives made no effort whatsoever to support Sinn Féin’s call for immediate implementation of the commitment to a Language Act in the North as agreed years ago at the St Andrew’s talks.

This hostile stance by the Government – even though Taoiseach Enda Kenny is himself an Irish-speaker who sent his children to Gaelscoileanna for their education – is no aberration but is reflected in the attitude of the state itself.

Thus we see the names of state bodies changed to remove any association with the Irish language (as Bord Gáis for example becomes Gas Networks Ireland), while, at a more practical level, the Department of Education continues to resist the growing demand for Irish-medium education throughout the state.

In the Dublin suburb of Clondalkin, for example, there are three Irish-language naíonraí or crèches which cater for 120 children. There are two Gaelscoileanna, with three classes between them, which can accommodate 90 children. This leaves 30 children whose parents want an Irish-medium education for their children unable to get one.

Most interestingly, it is working-class communities – in Dublin, Cork, Galway, Limerick and in small towns through the state – that want Irish to be a central feature of their children’s lives and the so-called independent Irish state which opposes it.

No wonder they don’t want the 1916 commemorations to mention Irish.

The Gaeltacht itself is shrinking by the day, with more and more families there turning to English to speak to their children. Why? Because they can see that the state is hostile to Irish and believe that their economic future lies in becoming like the rest of the country.

The Twenty-Year Strategy for Irish (brought in by Éamon Ó Cuív, Bertie Ahern and Brian Cowen) is openly ignored while the Government gets on with the job of making this ‘a great little country’ for bankers to do their business in, for Shell to seize our gas assets in, for German banks to be paid by Irish workers deprived of jobs and prospects.

The question is what are Irish speakers going to do about this!

Of all the Dáil parties, Sinn Féin is alone in making the Irish language a central issue, but the demands for Irish language rights – including the right of EVERY Irish child to have an Irish-medium education – are demands that should be put to all parties and Independents.

If Irish speakers remain silent, or confine themselves to moaning between themselves, the civil servants and policy formers will continue to ignore them, and continue to whittle away rights won in previous times.

It is imperative to get rid of this anti-Irish Government as soon as possible, a Government that daily commits economic treason against the Irish people compounded by social and cultural treason.

But we must equally make sure that the next Government will restore the rights of Irish speakers and reverse the anglicisation policies currently underway.

The revival of Irish is central to the revival of the Irish people, which national freedom and economic development is all about. 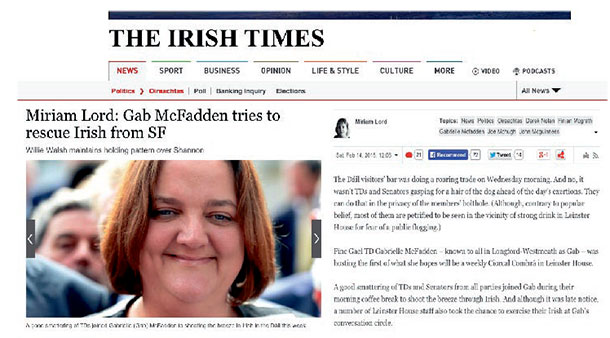 The Fine Gael TD is quoted as saying, “People kept calling me a Shinner and I didn’t like that. Sinn Féin has kinda taken the language over in the Dáil,” before adding somewhat contradictorily: “I want to take it back off them because it belongs to all of us.”

The idea that the language belongs to everyone seems as lost on the Irish Times as it is on Fine Gael. The headline reads: “Gab McFadden tries to rescue Irish from SF.”

That sums up the Establishment’s attitude to Irish.