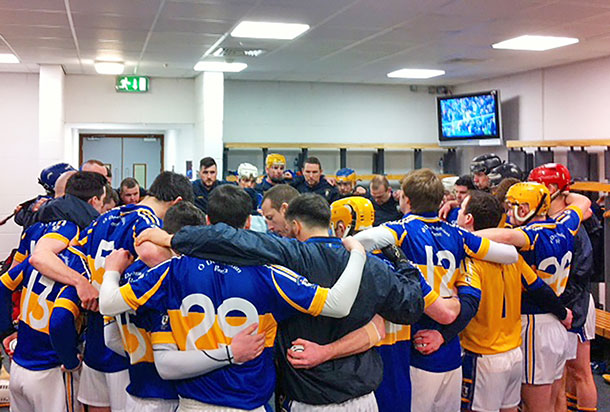 • The O'Donovan Rossa club in the changing room at Croke Park

HEADSTONES in Milltown Cemetery have been witness to many strange happenings over the decades. It must be one of the few graveyards in Ireland where people have entered alive only to meet violent death. On the Monday morning after Valentine’s weekend 2015, a less gruesome but significant event occurred unseen by passersby.

Several hurlers from the O’Donovan Rossa club in Belfast made a visit that morning to Milltown. They went to pay their respects to past club members and teammates. There was no fanfare; no spectacle. The spy cameras which used to survey the graveyard have long since disappeared, just like the British Army/RUC installation which they used to adorn. So, quietly, the Rossa players made their way from one grave to another with the trophy which they triumphantly carried home from Dublin the previous night: the All-Ireland Intermediate Club Hurling title.

As the club name suggests, O’Donovan Rossa CLG is steeped in the heritage and history of the Irish nation. Dedicated to the memory of Irish revolutionary Jeremiah O Donovan Rossa, the Belfast Gaelic club was established in 1916. One of the club founders was Joe McKelvey, himself an IRA Volunteer and one of the commanders in the occupation of the Four Courts during the Civil War. 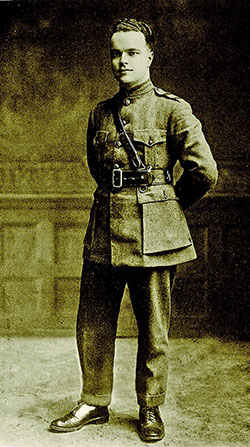 Belfast native McKelvey was later captured and killed by Free State forces. Emblazoned on the club crest is the historic battlecry “Crom Abú”. At its inception, membership of the club was originally restricted to members of the Irish Volunteers. Hostility visited upon members of O’Donovan Rossa in Belfast in the early days of its existence is difficult to accurately recount. Books such as Michael McLaverty’s Call My Brother Back give some hint of the menacing atmosphere in a city coming to terms with the violence of partition. It stands to recall this and the more recent history of conflict before returning to the club’s new chapter.

That new chapter was written by a team of hurlers many of whom were born after the 1994 cessation. Several were schooled at Bunscoil Phobail Feirste, Belfast’s first Irish-medium school founded and fostered by the Gaels of the district within sight of Rossa’s pitch. Team mentors and management included people who faced the worst of the political conflict. No one knows more than this band of people how difficult it was to build a team of all-Ireland champions. Years of planning; months of training; hundreds of hours of practice. And, in the final analysis, chance and fortune can still intervene against such sustained endeavour.

Last autumn, whilst playing club hurling at a younger age group, one of the team’s most prodigious scoring talents was cut down in a foul tackle. After collapsing on the pitch that day and being taken to hospital, his family learned he had sustained serious internal wounds and required surgery. Now he was back in competitive hurling and playing in an all-Ireland final. Another young player on the team went to Dublin on mid-term break from school. Six days before the match in Croke Park he was involved in a car crash. Two days later, still recovering from the road traffic collision, he was involved in another accident. Come the time for the match itself, he was ready to perform. Whilst others had their own personal focus for the occasion, this young player had a simple word written across the inside of his left forearm: “Alive”. For that was the essence of this day for him. Had fate taken another twist, he might not even have joined his teammates on the coach.

This resilient spirit won the day over opponents from London comprised of hurlers from Kilkenny, Tipperary and Galway. In fact, the London side Kilburn Gaels scored two stunning goals in the second half. It might have been easy to lose heart or composure at that point but that didn’t happen. The young team performed as a strong unit.

Before leaving the pitch at the end, I spoke to several players. Some had relations who had played in Croke Park previously and I reminded one: “You’re the third generation of Armstrongs to hurl here.”

A post-cessation generation, unfettered by conflict, might shape their own resplendent sporting destiny. Rossa’s renewal has rekindled that hope. That Monday morning after the game, the winds around Milltown might easily have whispered the words of Seamus Heaney from Requiem for the Croppies: “The hills blushed soaked in our broken wave. They buried us without shroud or coffin. And in August . . . the barley grew up out of our grave.” 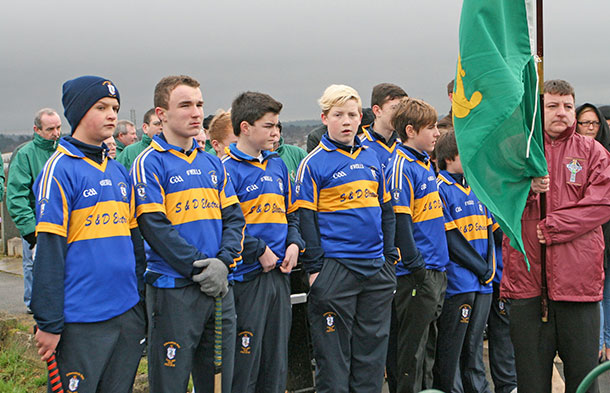 • O’Donovan Rossa club Guard of honour in Milltown, January 2013 for Joe McKelvey, one of the four martyrs executed by the Free State government in December 1922