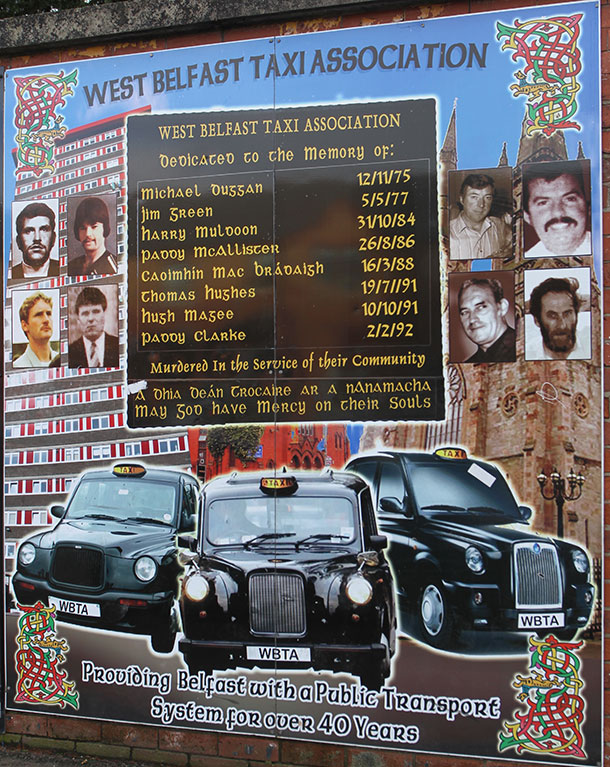 The taxi association and its drivers were demonised and targeted by unionist death squads – eight drivers were killed in sectarian attacks and hundreds more were assaulted, arrested and harassed

So said a friend of mine who drives one of Belfast’s famous black taxis along the various west Belfast and north Belfast routes and has done so for years.

He joked about the ‘Wailing Wall’ where the taxis pick up outside the Royal Victoria Hospital and where groups of drivers waiting for a load would lament the disastrous state of the world.

“After the wall was replaced by a steel fence, when the RVH was getting a facelift, the ‘Wailing Wall’ was renamed the ‘Wailing Railing’,” he chuckled, before adding: “It didn’t stop them ‘gurning’!”

Of course this tongue-in-cheek description of Belfast’s black taxi drivers belies the fact that for over four decades now they have carried hundreds of thousands of passengers along the Falls Road up the Whiterock and into Andersonstown and further afield to Twinbrook, Poleglass and Lagmore as well as covering north Belfast, going through the New Lodge and into Ardoyne during the worst years of the conflict.

They provided a service for the community when the public transport company took its buses off the road during times of tension and trouble on the streets and the drivers continued to operate in the face of British Army and RUC harassment and attacks by loyalist death squads, including guan attacks, bombs and murders.

The West Belfast Taxi Association has become part of the social, cultural and political fabric of West and North Belfast over the years and has played a significant economic role in areas that have suffered the worst excesses of unionist discrimination.

An Phoblacht’s PEADAR WHELAN, a devout user of the ‘black hacks’ looks at the history of the association and how it has changed over the years, from the days of piling them in and running the gauntlet up the road to the present-day plans for development as a Community Interest Company (CIC). 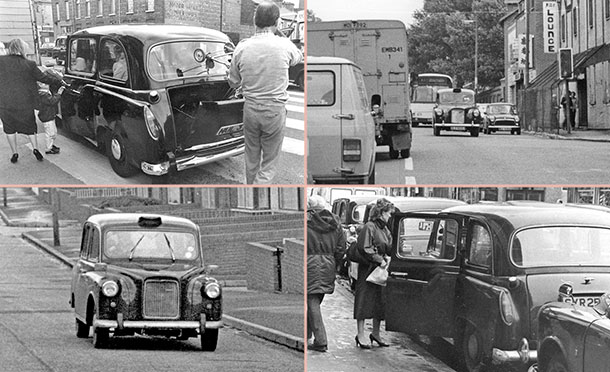 AS THE CONFLICT erupted across the North in the late 1960s, when the upheaval on the streets was at its height, barricades and riots were commonplace.
Belfast was in turmoil. Main roads were regularly blocked and bus services were often suspended, especially in west Belfast, in what people saw as a policy of community punishment imposed by  unionist-dominated transport companies.
In the spirit of the time, members of the west Belfast community refused to take this lying down. A number of local people travelled to London and bought a bunch of old black taxis. These became the first vehicles in a fleet that would increase to upwards of 220, many of which were and are driven by political former prisoners who would have been barred from jobs because of their imprisonment.

They were nicknamed ‘The People’s Taxis’.
This alternative service caught on and soon dozens of these, sometimes very old and dilapidated black hacks were weaving their way up and down the Falls, ‘Andytown’ and the Whiterock roads.
Frequently up to eight people would be crammed into the ‘hack’ - six in the back and two in the front – as getting people to their journey’s end took precedence over any and then new-fangled concept of ‘health and safety’.
When roads were blocked, the agile-minded drivers detoured down side streets. If that wasn’t an option, they used their vehicles as prototype SUVs and manoeuvred over the rubble of riots, mounted footpaths and traversed barricades.
Nothing, it seemed, could stop them.
It was a unique solution to a unique problem – providing transport for citizens of trouble-torn west and north Belfast, as war engulfed the cities, towns and villages of the North.
As the black taxis became more and more popular and effective, their presence on the roads came to represent something more to the unionist state and their military wing of the British Army and the RUC.
They became a major target for the British crown forces and the mainstream media.
The taxi association and its drivers were demonised. As a consequence, they were targeted by unionist death squads with the direct result that eight drivers were killed in sectarian attacks and hundreds more were assaulted, arrested and harassed. 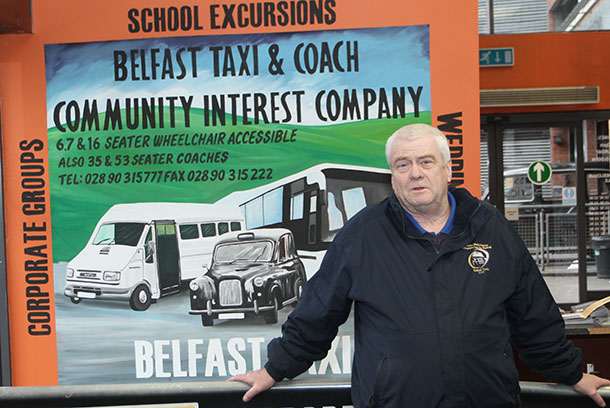 • John O'Kane, one of the longest-serving drivers on the road (over 26 years), with the mural for the new Community Interest Company behind him

It was commonplace to see a taxi pulled into the side of the road and its driver and passengers being ‘P-checked’ for their identities and details by British soldiers.
The ‘black hacks’ came to represent the resilience and resistance of the nationalist people and the ‘we can’ attitude of a community that was off its knees.
In 2010, just months after the opening of the new taxi rank in King Street, Sinn Féin President Gerry Adams hailed the Falls Taxi Association after its 40 years on the road as “a blueprint for community economic development”.
Adams pointed out:

“The heritage of the black taxis is intertwined with the history and experience of our community. As the community has evolved, so has the taxi association. The conversion of the open-air taxi ranks into a new complex, and now the opening of a new passenger terminal, are signs of forward planning and progress.”
The then MP for West Belfast MP added:

“The black taxi service is a public and community service in the fullest sense. That theme is beautifully illustrated and captured in the mural outside – it says ‘The People’s Taxis’.
“This initiative came from the people, it provides employment for people and it is a service for the people. There is a seanfhocal which expresses this more clearly – Ní neart go cur le chéile (Unity in strength).
“The black taxis are not only an element of community life in west and north Belfast. They mirror the community. The taxis were the first public transport service to go bilingual, reflecting the growth and interest in our native language and the needs and rights of those of speak Irish.” 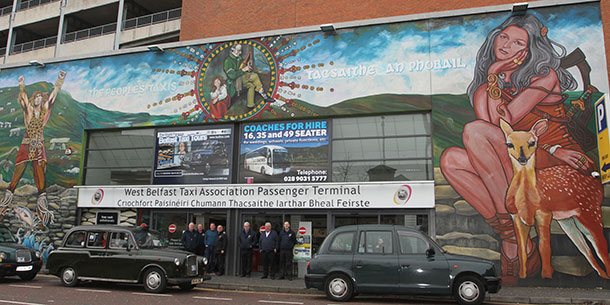 Glór Na nGael recognised this by presenting the Association with one of its annual awards.
Adams noted:

“Now the taxis bring people of other cultures to visit west and north Belfast.
These visitors bring investment to the heart of the community and the tours also bring our culture and history to life for them.
“So the history of the taxi association is a history of community resistance, commitment and success.
“It is a history which should be cherished.
“So too the names of those who died providing this service. They are Jim Green, Michael Duggan, Paddy McAllister, Hugh Magee, Harry Muldoon, Caoimhín Mac Brádaigh, Thomas Hughes and Paddy Clarke.”

The black taxis are still striving for equality and recognition.

“All we are asking for is a level playing field – equality. Nothing more, nothing less,” says Martin Savage, Director of the Belfast Taxis Community Interest Company, as the West Belfast Taxi Association is now known.

Speaking to An Phoblacht at the company’s bustling rank on Belfast’s King Street, the former driver points out that the North’s main public transport company, Translink, is subsidised to the tune of millions of pounds yet the Belfast black taxis (despite their efforts to deliver a modern, efficient and reliable service) “receives not one penny from Government.

“We employ over 220 people, both drivers and administration staff, in one of the worst economic blackspots in the North. We provide a service that is as good as, if not better, than Translink in some cases yet we get no Government funding.

“Our intention is to improve the conditions of our drivers and staff and improve the rank for the comfort of our customers.

“Everyone remembers the old stops in Castle Street and the old open-air rank we operated out of before this building was built but we want to improve both our services and conditions for our drivers yet we keep hitting the proverbial brick wall.” 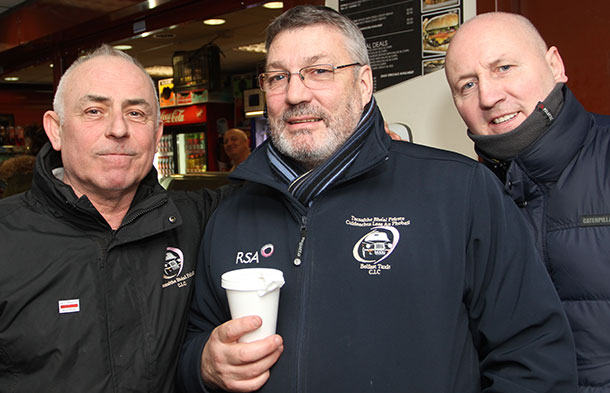 •Drivers and former POWs Jim Crane (centre) and Tom McVeigh (right) with Gerard 'Spud' Murphy one of the loaders who, as well as loading the passengers, designates the drivers' routes

One of the issues that the company has raised with the Department of Regional Development (controlled by Ulster Unionist Party Minister Danny Kennedy) is that of concessionary fares.

“Translink offers concessionary fares such as multi-journey tickets, and free passes for pensioners, which are subsidised by the Department of Regional Development, yet when we ask to be included in such schemes we are excluded.”

With the company expanding its services to include political tours of Belfast, particularly the mural tours, they find a bias coming from the Tourist Board which is under the remit of Democratic Unionist Party Minister Arlene Foster’s Department of Enterprise Trade & Investment.

“Their flagship projects are the Titanic Quarter and the Giant’s Causeway so they promote them and ignore the political tourism despite the figures telling us that one of the main reasons for people to come to the North is to learn about the political conflict.

“In the long run, we want to expand the service we provide through links with the community, Government departments and other transport providers such as Translink. When we started 40 years ago we were marginalised by the state and pigeon-holed. Now we are leading the way in how we serve our community, look after our workers, and we will get bigger and better.”