Taoiseach – Time to go / Free the Five – Axe the Tax 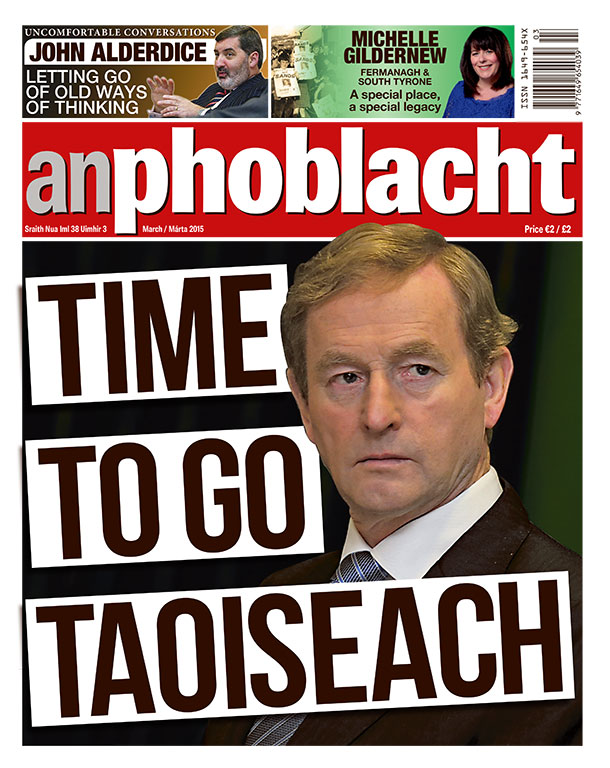 Where are the dawn raids on the white-collar crooks and their political friends sharing the hospitality of the Golden Circle?

FINE GAEL and Labour are struggling not just to maintain their poll ratings – their credibility with voters is wearing thin too.

Speakers at the Fine Gael ‘National Conference’ and Labour spokespersons on TV and radio have been making it clear that they will be seeking re-election effectively on a joint Fine Gael/Labour ticket.

It’s also clear from the opinion polls that the next election will be a choice between a Fine Gael-led or Sinn Féin-led government.

Sinn Féin has become the natural challenger to Fine Gael and its bit-part prop in Labour.

It is a choice between two diametrically-opposed visions for Irish society.

Fine Gael’s way means further inequality, the continued pursuit of austerity with a continuation of cuts and charges aimed at low and middle income families, the destruction of public services, including health, downward pressure on workers’ wages and conditions, further attacks on rural Ireland and continued mass emigration.

Sinn Féin’s way means growing our economy out of recession, a recovery for all, real jobs with proper terms and conditions, decent public services accessible to all, including those in rural Ireland, and the building of a united Ireland and a citizen-centred, rights-based society.

If you truly believe in your bombastic declarations from your annual conferences and in the Dáil – and you do not fear the wrath of the people at the polls – call an election.

Free the Five – Axe the Tax

THE JAILING of five people for peaceful protests against the water tax and the installation of water meters is wrong, as is the intimidatory early-morning raids by scores of gardaí on the homes of protesters, including young teenagers and even schoolchildren.

Where are the dawn raids on the white-collar crooks and their political friends sharing the hospitality of the Golden Circle?

The corrupt politicians, bankers and developers who destroyed the Irish economy are regularly invited in by the Garda for questioning ‘by appointment’. Few have even seen the inside of a cell despite the enormous consequences of their conduct in proportion to that of water protesters.

The Fine Gael/Labour Government and the Establishment seem determined to frighten protesters off the streets, using one instance in which a protest against Tánaiste Joan Burton that spiralled out of Garda control as an excuse.

They will not succeed.

The water meter scam – dreamt up by Fianna Fáil and enforced by Fine Gael/Labour – falls further into disrepute every day (as does the law).

We say release the prisoners, stop the metering and scrap the charges.

Vote this toxic Government out of office and claim this country back for our people.