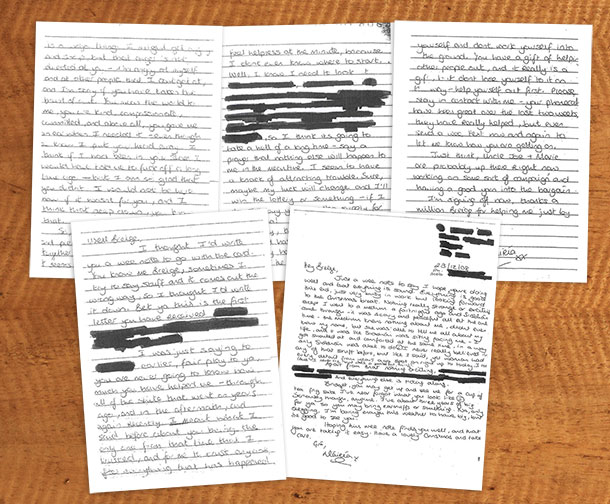 ONE of those acquitted in May at the Belfast Crown Court has taken the unusual step of releasing through her lawyers letters from Máiría Cahill thanking her for her support.

In a statement released by Madden & Finucane Solicitors on Tuesday, Breige Wright said:

“I have been the subject of a media onslaught following the BBC Spotlight broadcast on October 14th 2014.

“Due to the fact that Máiría Cahill refused to stand over her allegations against me in court where she would have been challenged, I feel that I have to release two significant letters that she sent me in 2005 and in 2008.

“My legal team would have questioned her about these letters had there been a trial.

“There has been a deluge of inaccurate, prejudiced and selective reporting of all aspects of this case – particularly my relationship with Máiría Cahill and in terms of the support that I offered her.

“Some ill-informed commentators and political parties have added to the biased Spotlight broadcast. They have been eager to set aside due process and the verdict of the court.

“My intent was to try to help Máiría. I believe that these letters demonstrate that Máiría accepted and valued that support.

“The letters have been slightly redacted due to personal information that relates to others including Máiría’s family.”

This letter from Máiría Cahill to Breige Wright is undated

I thought I’d write you a wee note to go with the card. You know me Breige, sometimes I try to say stuff and it comes out the wrong way, so I thought I’d write it down. Bet ya this is the first letter you have received __________

I was just saying to __________ earlier, fair play to ya, you are never going to know how much you have helped me - through all of the shite that went on years ago, and in the aftermath, and again recently, I meant what I said before about you being the only one from that time that I trusted, and for me to trust anyone after everything that has happened is a major thing.

I might get angry and snap, but that anger is not directed at you – I’m angry at myself and at other people that I cant get at, and I’m sorry if you have taken the brunt of it. You mean the world to me, you are kind, compassionate, committed, and above all, you gave me an ear when I needed it – even though I know I put your head away. I think if I had been in your shoes I would have told me to fuck off a long time ago – but I am so glad that you didn’t. I would not be here now if it wasn’t for you, and I think that deep down you know that.

So, I am really going to try and piece my head, and my life back together, even though at the minute it seems next to impossible. I just feel helpless at the minute, because I don’t even know where to start. Well, I know I need to look at __________ so I think its going to take a hell of a long time – say a prayer that nothing else will happen to me in the meantime. I seem to have a knack of attracting trouble.

Sure, maybe my luck will change and I’ll win the lottery or something – if I do I’ll buy you a vodka supply for life ha ha!

Anyway, this started off as a wee note and has turned into a book! I definately have too much time on my hands at the minute. You take care of yourself and don’t work yourself into the ground.

You have a gift of helping other people out, and it really is a gift but don’t lose yourself to it on the way help yourself out first. Please stay in contact with me – your phonecalls have been great over the last two weeks, they have really helped, but even send a wee text now and again to let me know how you are getting on.

Just think, Uncle Joe + Marie are probably up there right now working on some sort of campaign and having a good yarn into the bargain.

I’m signing off now, thanks a million Breige for helping me just by being you.

Just a wee note to say I hope you’re doing well and that everything is sound. Everything is good this end, just very busy in work but looking forward to the Christmas break.

Nothing really strange or exciting except I went to a medium a fortnight ago and Siobhan came through – it was scary and peaceful all at the one time – the medium knew nothing about me, didn’t even know my name, but she was able to tell me all about my life, and it was like Siobhan was sitting facing me – I got shouted at and comforted at the same time, in a way only Siobhan was able to do. I never really believed in any of that stuff before, but like I said, yer woman had every detail from years ago. Spot on right up to today. I roared (and I never cry, but was a peaceful thing!)

Apart from that nothing exciting __________ And everything else is ticking along.

Bridget, you may get up and see me for a cup of tea for frig sake I’ve near forgot what you look like [smiley face]. Seriously though, anytime. I’ve about three years of biz for ya so you a may bring earmuffs or something. Na, only slegging, I’m boring enough this weather to have biz, but be good to see you.

Hoping this wee note finds you well, and that you are taking it easy. Have a lovely Christmas and take care.