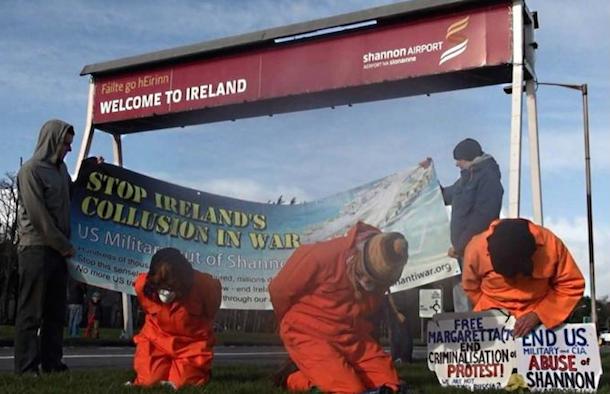 AN OIREACHTAS COMMITTEE visited Shannon Airport this week to look at concerns by human rights group Shannonwatch about its use by US military aircraft in contravention of Irish neutrality and its possible use by the CIA for illegal renditions.

The Oireachtas Joint Committee on Public Service Oversight and Petitions, headed by Sinn Féin TD Pádraig Mac Lochlainn, has also promised to look into the failure of the Garda to search US military planes and secret CIA flights.

The committee keeps a close eye on Government departments and ombudsmen’s reports as well as considering petitions submitted by the public, from across the 32 Counties, on issues of concern to them.

The visit on Thursday was a follow-up to a petition by Shannonwatch earlier this year.

The petition called for the Irish Government to investigate the use of Shannon Airport and Irish airspace for the transit of US armed troops, munitions and other war material as well as for the refuelling of CIA-associated aircraft involved in ‘extraordinary rendition’.

During their visit to Shannon, representatives of the committee met with members of the Garda, including Chief Superintendent John Kerin, and with airport officials before meeting again with Shannonwatch representative Dr Edward Horgan.

Edward Horgan is a former commandant in the Defence Forces who served in peace-keeping missions with the United Nations.

The committee was informed that about 40,000 US troops had gone through Shannon so far this year.

Shannonwatch understands that airport officials said that US troops were not essential to the economics of Shannon Airport (as they contribute relatively little) and that civilian passengers contribute far more with shopping, car parking and so on.

Attorney General’s ‘advice not to search’

Amongst the topics covered in a “constructive” meeting between Shannonwatch and the committee were the non-searching of US military aircraft and past indications from gardaí that the Attorney General had issued advice not to search suspected rendition planes.

“Gardaí continue to insist on needing a warrant from a judge to search chartered troop carriers and it is even suggested that international diplomatic laws forbids them from searching US military aircraft. We have never received an adequate explanation of the legal basis for such claims.”

Shannonwatch asked the Oireachtas committee to seek clarification of exactly what laws the government is referring to when it talks about sovereign immunity and chairperson Padraig Mac Lochlainn TD undertook to follow up on this.

Shannonwatch also raised the fact that military planes and chartered ‘civilian’ troop carriers are treated differently and pointed out that both are bound by international laws on neutrality.

“We also pointed out the direct contradiction in Government policies when they continue to declare a policy of neutrality while being in gross breach of international laws on neutrality. We recommended that the committee should consult an international law expert on neutrality and they agreed. Matters of policy are primarily a matter for legislators rather than gardaí.” 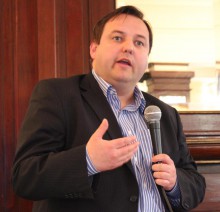 Pádraig Mac Lochlainn (pictured) noted that Shannonwatch have also made serious claims that complaints or requests made to gardaí at Shannon have not been followed up. He went on to say:

“The series of meetings on the ground in Shannon will assist the Committee in following up this controversial issue. We will also be able to assess first-hand Shannonwatch’s call for an independent inquiry in relation to what they perceive as the failure to investigate aircraft suspected to be involved in illegal rendition.”

During the meeting, Edward Horgan noted:

“The reality is that Ireland has been facilitating wars in which hundreds of thousands of innocent people, including children, are being killed while failing in our constitutional and moral responsibilities to promote international peace and justice.

“We will not allow our government or the Garda to ignore that fact.”

Shannonwatch is organising a large demonstration at Shannon Airport on Sunday 12 October at 2pm. “It is being supported by peace and anti-war groups from around Ireland and is being held at a time of renewed bombing in the Middle East by the US and its allies,” Shannonwatch said.