This article was first published in 2004

IT WASN’T supposed to be like this, thought one of Ian Paisley’s lieutenants as he looked out across the front lawn of the City Hall.

Above him the Union Jack flew, but before his eyes were thousands of St Patrick’s Day revellers – dancing and singing; children on their fathers’ shoulders applauding Girls Aloud. A sea of green but – worst still – were flags coloured green, white and orange . . . the hated Tricolour.

What had gone wrong?

There was a time when 27,000 occupied houses in Belfast were unfit for human habitation. There was a time when in West Belfast male unemployment reached 50% in places like Ballymurphy. In Enniskillen, figures showed that Protestants were being allocated public housing at the rate of 11 to 1 over Catholics, who made up half the population.

There was a time when the IRA Border Campaign had fizzled out, when republicans were demoralised and were prepared to try new tactics, including participating in politics.

In Britain in September 1964, the Tory government called a Westminster general election for October 15. Sinn Fein was proscribed but for election purposes it stood as ‘The Republican Party’. On September 6, the republicans put a Tricolour in the front window of their election headquarters at 145 Divis Street.

The campaign got off to a slow start for all parties.

Ulster Unionists were united and were standing in all 12 constituencies. The nationalist vote was badly divided – though, in west Belfast, Harry Diamond of Republican Labour was quietly confident that there was some unionist apathy and he could beat James Kilfedder for the seat, even though the intervention of former IRA prisoner Billy McMillan would split the vote.

The first scare came on Saturday, September 26, in a screaming front-page headline, when the News Letter announced: “The Dollars Roll In – ‘Plenty’ in Sinn Fein election coffers.”

The main lead in its Monday edition was: “Paisley to march against Tricolour.”

Ian Paisley, Moderator of the Free Presbyterian Church, called upon Protestants to assemble in their thousands at the City Hall that evening to march on Divis Street. It was a call that sent a chill through the nationalist community, which had been subject to loyalist and police incursions in previous decades. 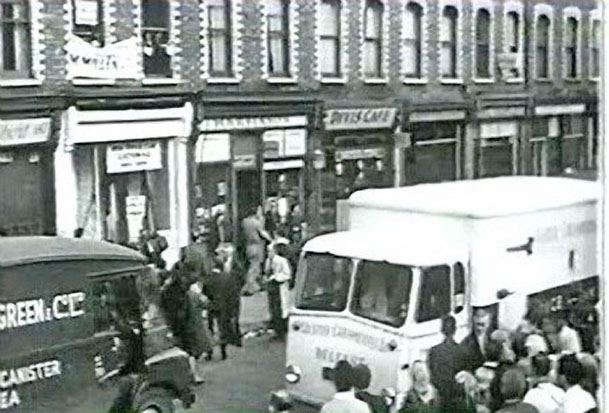 The RUC told the Minister of Home Affairs that it regarded the display of the Tricolour and Paisley’s proposed protest as ‘provocative acts’. (The flag had been in the window for three weeks without a complaint being made.)

The Minister met Paisley and appealed to him. He agreed to call off the march but not the rally.

Later that day, 50 RUC men, using pickaxes and crowbars, smashed their way into the republican offices, seized the Tricolour, put it into a patrol car and drove off at high speed whilst a sullen crowd of several hundred nationalists looked on.

A notice was served on Billy McMillan, under the Flags and Emblems Act, which referred to the illegal “display of the Tricolour flag or flags of the Irish Republic, or any other flag or anything purporting to represent the Irish Republic”.

From the street, nationalists began shouting abuse at those in the republican office and demanded that a new Tricolour be displayed. The election directorate assuaged the crowd by issuing an ultimatum to the RUC that if the flag wasn’t returned by Thursday it would be replaced.

That Monday night, Paisley held a triumphant rally in the grounds of the City Hall where he welcomed unionist candidate James Kilfedder.

“The republicans must not be allowed to fly the Tricolour, and when the last vote is counted on polling day we must show the world that there was no wavering in the determination of the people to keep the Union Jack flying over West Belfast.”

Unionist voters in the constituency were now galvanised.

In Ballynahinch, Prime Minister Terence O’Neill (surrounded by members of the Apprentice Boys, the Black Preceptory and six Orange bands) commenting on the seizure of the Tricolour, ridiculously declared that Sinn Féin was the main challenge and described the republicans as “nothing more than modern anarchists who refuse even now to abjure the discredited policy of violence”.

He ignored the fact that the threat of violence came from Paisley and the actual violence from the RUC under government instruction.

On Tuesday night, Paisley held another rally at the City Hall and called upon the Minister to prosecute those responsible for displaying the flag. Over in Divis Street, there was a stand-off between a large nationalist crowd and riot police.

On Wednesday night, there were more scuffles, followed by RUC baton charges and stone throwing.

On Thursday, after lodging their nomination papers, the republican candidates returned to the election headquarters and once again placed a Tricolour in the window to the cheers of supporters.

Shortly after 2pm, a column of RUC men, backed up by a tender, arrived at the offices. They tried to break down the reinforced door and when that failed they simply smashed the pane-glass window, stepped in and seized the flag.

Immediately, fighting broke out and by evening rioting was widespread throughout Divis Street and the Falls Road, and continued for the next two nights. Hundreds were injured and scores of people, including a mother of eight, were arrested and subsequently imprisoned for up to six months.

Calm was eventually restored but at the cost of nationalists biting their tongue: the Tricolour was never replaced in the window of 145 Divis Street (though the RUC didn’t interfere either with the flag when it was carried in a parade from Beechmount to Hamill Street, which concluded in an election rally).

During the election campaign, the British Labour Party leader (and subsequent Prime Minister) Harold Wilson issued a pledge to the Campaign for Social Justice that as PM he would outlaw racial and religious discrimination in the North. His remarks drew this page one headline from the News Letter: “Interference in Ulster housing – Wilson bombshell.”

On October 15, James Kilfedder defeated Harry Diamond to become the Unionist MP for West Belfast. Billy McMillan lost his deposit. (After the republican split in 1969 he became a leader in the ‘Official’ Republican Movement and was later assassinated by the INLA during a feud.)

Kilfedder was carried shoulder-high at the City Hall amid cheers and the singing of The Sash. He was greeted by an ebullient Ian Paisley who said: “I am absolutely satisfied. Sandy Row and Shankill did their stuff. They are well able to answer the Falls any day.”

Last Wednesday, on St Patrick’s Day, thousands of young people carrying Tricolours swarmed down Divis Street, past where 145 once stood but oblivious to its history, through Castle Street and up Donegall Place to a concert outside the City Hall. It was the very route, in reverse, that 38-year-old Ian Paisley had threatened to take from the City Hall to Divis Street 40 years earlier to remove from a window one Tricolour.

What, indeed, had gone wrong?