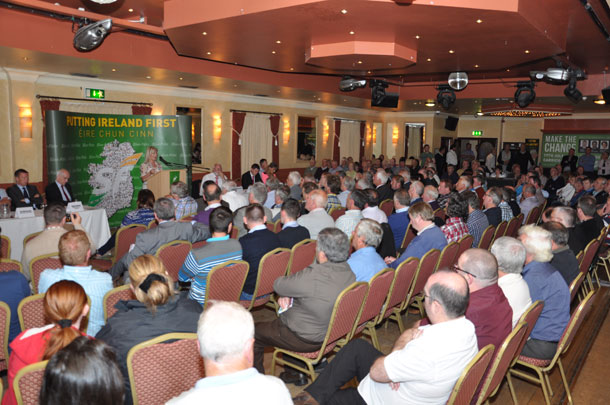 • Agriculture Minister Michelle O'Neill MLA addresses farm leaders and communities in Ballinasloe, County Galway, on how the problems in the beef sector can be tackled

The deal ensures a fairer distribution of European money to farmers and includes an £80million pledge for rural development.

The multi-million-pound investment means farmers in disadvantaged areas, such as hill farmers, will get a more equitable deal.

After months of negotiations, Minister O’Neill brokered an agreement that ensures a fairer distribution of European funding to local farmers.

“This has been a very contentious issue and Sinn Féin has shown we can deliver for all farmers.

“This is an investment of £623million, making it the biggest-ever investment in a rural development programme.

The Mid-Ulster MLA said the deal brokered on CAP has been welcomed by a wide range of farming organisations, including the Ulster Farmers’ Union.

“This is a time of significant change for farming and rural communities and they asked me for clarity and that is what has been delivered.

“This is a reasonable, fair and balanced approach which is great news for rural communities,” she said.