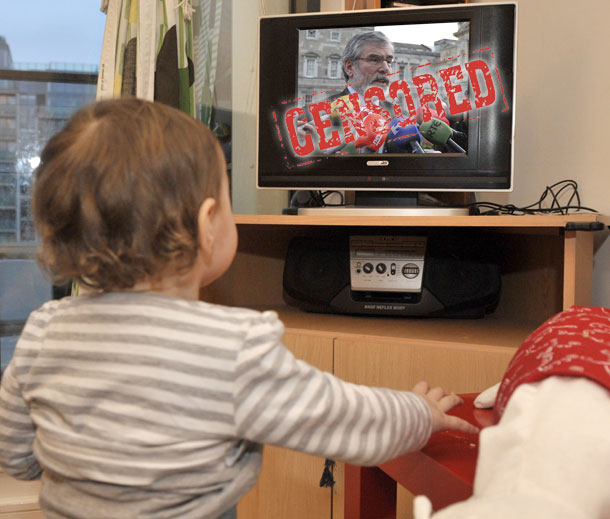 • Even if they wanted to go back to the days of official Section 31, in the age of social media they can’t

PEOPLE don’t change much but generations do. The people in leadership positions in the Irish media at the moment tend to be about the same age. Like all folk of a similar age, they are a product of the same historical moment.

Lots of them started out as bright, ambitious young things in the mid-1970s. Now they are at the pinnacle of their chosen greasy pole. This is the generation that implemented Section 31 state censorship – the ‘Censorship Generation’ – and only when you think of them in this way does their collective behaviour make any sense.

It is an attitude and behaviour that is highly partitionist and imbued with a visceral hatred of Sinn Féin. Another of this generation’s main characteristics is being rather comfortable with censorship.

Conor Cruise O’Brien tried to use Section 31 of the Broadcasting Act in the 1970s and 1980s to censor coverage of ‘the Troubles’ in or about the North of Ireland which could in any way have been seen as pro-republican. In papers such as the Irish Press, editor Tim Pat Coogan published editorials attacking Section 31.

The Section 31 broadcasting ban was lifted in 1994 by the then Minister for Arts, Culture and the Gaeltacht, Michael D. Higgins, as part of the Peace Process sequencing and ending 22 years of direct political censorship. But even when the ban on Sinn Féin elected representatives was lifted, the journalists and broadcasters who had implemented this state censorship retained the old mind-set. The years of silencing republicans in the 26 Counties left an enduring legacy within journalism as people working within this trade became socialised into a reality whereby the state told them what to report and what to think. This is not unique to Ireland.

A good friend of mine lived through the later years of the communist regime in East Germany, the old GDR. He had an interest in journalism but didn’t take it any further. The party hacks in his town were told what to write and what to think. Even today, 20 years after Section 31 was repealed, in Donnybrook and in newspaper offices across Dublin, when Sinn Féin is mentioned, many people in senior positions unconsciously consult with their inner censor, their ‘inner Stasi’. 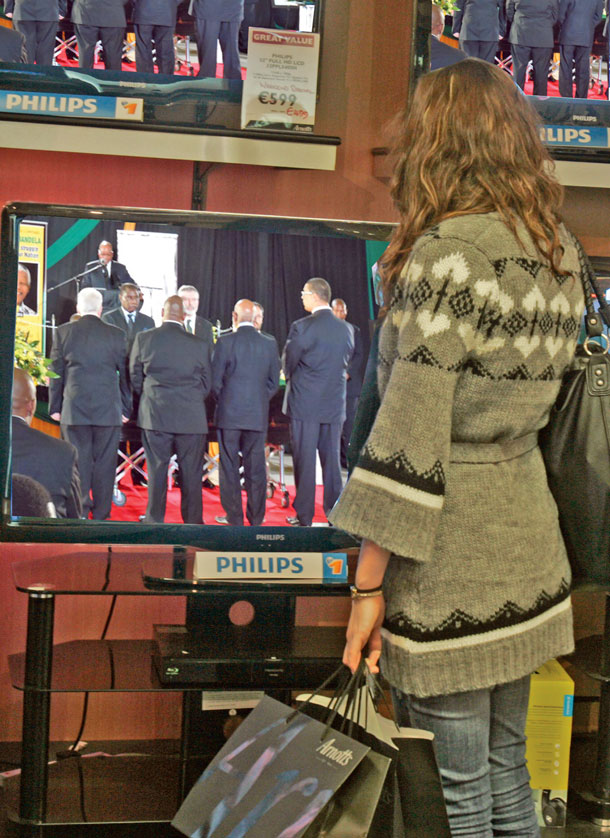 The funeral of Nelson Mandela (as reported in our last issue) put these apparatchiks into a real spin. Their quandary was to broadcast the images of the global village paying homage to Madiba without letting the Irish people know that Gerry Adams TD was held by the Mandela clan in the highest regard.

TV3 broadcast a one-hour special on 29 December titled Remembering Mandela on the week-long memorial events for Madiba and featuring Irish personalities, including (quite rightly) the Dunnes Stores anti-apartheid strikers of the 1980s.

TV3’s hour managed to mention Bono and President Michael D. Higgins at Madiba’s mass memorial rally in Soweto but ‘overlooked’ the presence of joint First Minister Martin McGuinness, who was a prominent rival candidate to Michael D in his election as President of Ireland.

TV3’s Remembering Mandela also totally airbrushed the inclusion of Sinn Féin’s Gerry Adams and Richard McAuley in the international guard of honour alongside Mandela’s coffin at the family service that ended a week of commemorative events. No other Irish political figures received this distinuguished honour but TV3 chose to pretend it never happened – because of bad journalism or because they were Sinn Féin? If it had been Bono or Jedward, however . . .

Sinn Féin, like all of the other major parties in the Dáil, came out of armed conflict. They can trace their roots from either the Irish Volunteers or the Irish Citizen Army. There are current members of the Labour Party who may have once been, ahem, close to the thinking, shall we say, of the ‘Official IRA’.

Personally, I don’t care if anyone in the current Labour Party frontbench once thought that North Korea was a model for Ireland to follow. However, I do want Irish journalists to ask them about past events – in the same way that they quiz Sinn Féin leaders – in the interests of ‘balanced reporting’.

The recent highly-personalised onslaught directed at Gerry Adams TD is, in my opinion, without parallel in this state. This is the same media that did not pass public comment on the fact that Charles J. Haughey, on a modest public salary, lived in a mansion and owned his very own island off the coast of Kerry. Only when his power was on the wane did they start to rip at the carcass of his career. It was hyena journalism: willing to feed off a dying political animal but frightened to strike until they smelt infirmity.

State censorship pollutes journalism if it is allowed to take root. We now have a generation of people at the senior levels of their trade in organisations that started their careers on the understanding that, no matter what the verdict of the people was, some democratically-elected voices were not to be heard.

British Prime Minister Margaret Thatcher followed in their wake and journalists in Britain derided her “oxygen of publicity” nonsense for what it was: the decision of a Prime Minister who had clearly lost her grip on reality.

Anyone who thought that it was a blow against Irish republicanism to have the words of Gerry Adams and Martin McGuinness spoken by an actor belonged in a locked ward.

The Censorship Generation recoiled in horror recently when Pádraig Mac Lochlainn TD explained on TV3’s Tonight with Vincent Browne that IRA Volunteers (like previous eras of the conflict) had a duty to do what they did when out on operations in the then political circumstances. The Donegal TD was simply stating a truth. However, if you have been socialised into a type of journalism whereby state censorship is normal then the truth is sometimes a problematic substance. 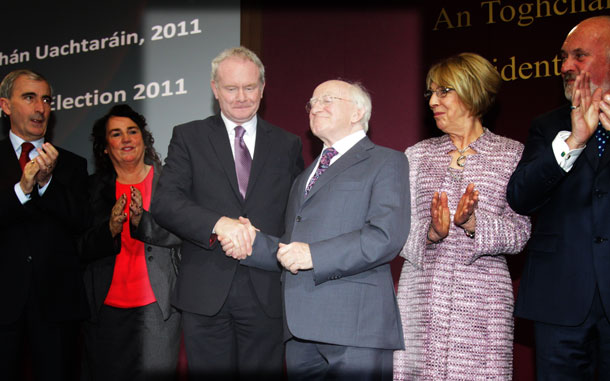 I do not know how the Censorship Generation will cope when Sinn Féin eventually sits on the government side of the Dáil.

If the Irish media village was run by people who accepted all democratically-elected politicians on the basis of their mandate then we would be in a new dispensation. That would be a level playing field without fear or favour. Then, anytime a Sinn Féin representative dropped the ball it would be fair game because it would be what everyone else got.

Gerry Adams has been targeted not because he is a liability to Sinn Féin – quite the opposite.

There is nothing amiss with the Fourth Estate going after an elected politician, especially a party leader. That is to be expected. What is aberrant is the extent to which the Irish media have gone after Adams but at the same time been poodles of a government that has ripped up the living standards of the poor and less-well-off and the marginalised at the behest of the Troika with hardly a word from our ‘opinion formers’.

After the next election in the 26 Counties, Sinn Féin will likely be the biggest party in opposition. As Scotland First Minister Alex Salmond once presciently observed, oppositions have a habit of becoming the government. This is not the retirement present that the Censorship Generation will want and they seem determined to use all of their influences to prevent, or at least delay, that event.

When they were cub reporters the main objective of the 26-county state and the Establishment at large was to smash republicanism. Of course, they failed and now they anticipate (and not in a good way) the ranks of Sinn Féin being swelled on the benches of the Dáil. This is what Section 31 was designed to prevent.

The thing that rankles with the Censorship Generation and the Cappucino Commentariat is that, even if they wanted to go back to the days of official Section 31, in the age of social media they can’t.

Even though the mainstream media remain hostile and influential, their power is not what it was. Through social media, traditional media platforms can be successfully bypassed much to the chagrin and befuddlement of the Censorship Generation and a ‘responsible’ media (i.e. pro-status quo).

As the mainstream media make themselves distant and irrelevant from the people, in the digital age, the people can do it for themselves.

The nation of the townlands can now tweet at the crossroads.

The best thing that the Censorship Generation can do now is to realise they lost and that their day has gone.

» Phil Mac Giolla Bháin is the Editor of The Irish Journalist, the National Union of Journalists’ in-house magazine for members in Ireland. He writes here in a personal capacity.