Barriers to reconciliation and a shared future 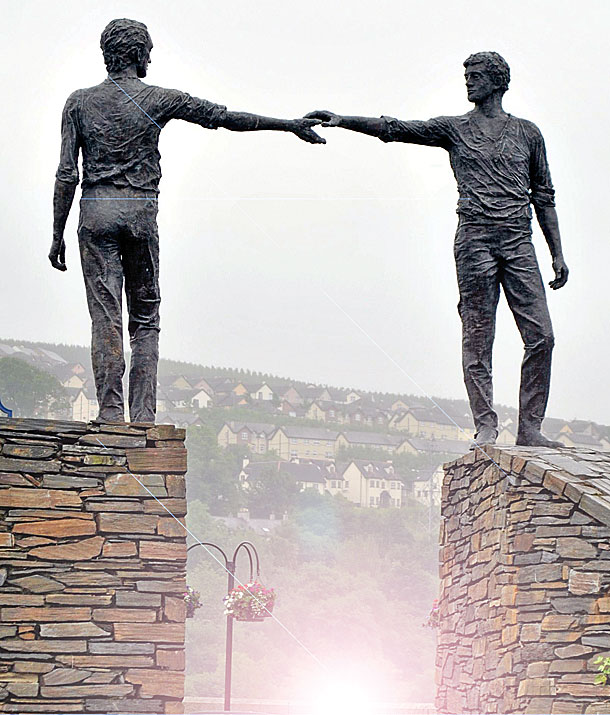 SECTARIANISM is both a by-product of British colonialism in Ireland and the cement used to embed the partition of Ireland and provide the ethos of the new Northern state just over 90 years ago.

The government of the state was infamously described by a one-time Prime Minister James Craig as being “a Protestant parliament for a Protestant people”.

It was designed to guarantee an overall permanent unionist and Protestant majority.

To this day, Northern society continues to exhibit the communal sectarian divisions which were used to create the Northern state and a present-day siege culture originally fostered by the unionist ruling elite to maintain social control and provide the fledgling state with a raison d’źtre.

The fact is that sectarianism and segregation are central to our contested past. For as long as that remains the case, it will hold back the address of legacy issues.

The polarisation and societal and political ambivalence fostered by sectarianism means that Northern society has yet to address with any sustained or mainstreamed discourse the nature of sectarianism and how it should be tackled.

It is a fact that, for as long as the attitudes and agents of sectarianism and segregation remain unchallenged, division and polarisation will be perpetuated, intolerance and bigotry will continue, and the potential for instability and conflict will be a constant.

The Good Friday Agreement provides the political framework and governing principles to facilitate the conduct of politics and co-existence of distinct and competing political traditions and aspirations.

True democratic politics, bereft of sectarian culture or attitudes, need to work and be seen to do so successfully within our institutions, under the agreed and binding Good Friday Agreement principles.

To that end Sinn Féin supports:-

Part of our present reality is that the past cannot be changed or undone, nor can the suffering, hurt or pain be disowned – by any side, because none of us were bystanders to the conflict.

However, all victims deserve acknowledgement and healing of their pain, if that is possible

An initiative of common acknowledgement by all sides – British, Irish, unionist and republican – of the injustices, actions and practices, and attendant hurt caused by and to each other could introduce a powerful new dynamic to our Peace Process which could help create the space for healing, forgiveness and space to grow.

Sinn Féin advocates an all-inclusive cross-party engagement to build upon the measures contained in the Together Building a United Community strategy.

We believe the Civic Forum has an important role to play in such discussions.

Consideration should also be given to the formulation of a dedicated Reconciliation Strategy under the auspices of the North-South Ministerial Council.

It is through the implementation of such measures that entirely new circumstances can be forged and provide a new context within which to finally address the legacy of our past.

Reality shows, however, that some within our society are implacably opposed to peace and progress. Sectarianism and segregation is the refuge of those who reject the Peace Process. They offer nothing except an agenda of permanent sectarian division – and they must not be allow to succeed.

A Bill of Rights should be urgently introduced to copper-fasten the right of all citizens to live free form all forms of sectarian harassment, bigotry and intolerance.

In addition, we believe international best practice should inform the entrenchment of a definition of sectarianism in anti-sectarian legislation in the North of Ireland. This should include robust incitement to hatred provisions. Such new legislative instruments must be guaranteed the full support of the criminal justice system.

In order for sectarianism and segregation to be comprehensively tackled, our political and social context must be changed.

Sinn Féin believes this can happen through the development of an authentic reconciliation process with the critical mass and momentum to assist in transforming current divisions with new human and political relationships.

An inclusive reconciliation process could re-energise politics and support in opening up a new phase of our Peace Process.