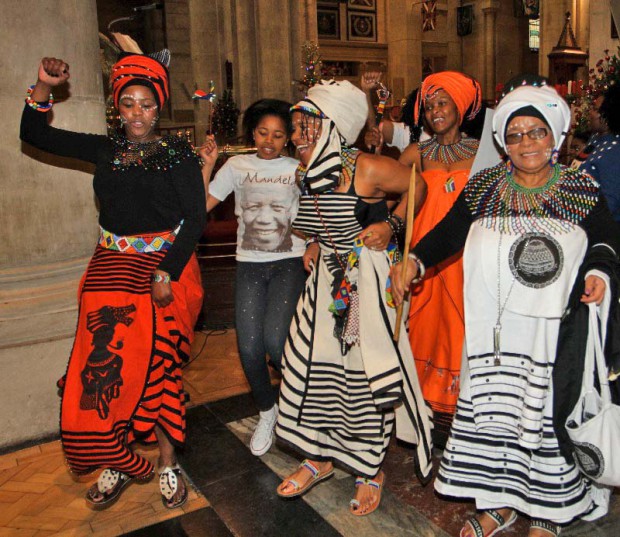 • Dancers from the Intsika Ka Xhosa

THE extent to which Nelson Mandela’s experiences of resistance, imprisonment and nation building impacted on the lives of so many people was reflected in the civic ceremony held in St Anne’s Cathedral in Belfast on Saturday 14 December.

Senior clergy from the main religions as well as believers from other religious communities such as the Bahá’í faith contributed to the ceremony.

But it was the words from Mandela himself, quoted by the many readers from across Belfast society, that provided so much inspiration.

The dancers from the Intsika Ka Xhosa: Pillars of the Xhosa Tribe added an authentic African theme that spoke of the resistance, defiance and Mandela’s triumph.

Nandi Jola from the dance group read her poem ‘Never, Never and Never Again’ that summed up that victory.

Never again shall I be called a ‘Kaffir’

NNever again will I speak Afrikaans

Isixhosa is my language

In my land, South Africa, I shall walk free carrying no ‘Dom Pass’.

It was a fitting ceremony in honour of Madiba.