SURVIVORS and families of the victims of the Miami Showband massacre in 1975 are to sue Britain’s Ministry of Defence and police authorities over the relationships between the British Army, the RUC and the unionist death squad killers.

At least four serving soldiers from the British Army’s Ulster Defence Regiment – also members of the illegal Ulster Volunteer Force – set up a checkpoint on a country road outside Newry on 31 July 1975 specifically to stop the Miami Showband after they’d played a gig in Banbridge.

Three members of the chart-topping group were gunned down after a bomb being placed in their tour minibus prematurely exploded, killing the two UDR soldiers carrying it, Harris Boyle and Wesley Somerville.

The intention had been for the bomb to explode later, framing the band as an IRA unit transporting a bomb or blaming the IRA for the killings.

Des McAlea (also known as ‘Des Lee’) was injured in the explosion.

Two serving members of the Ulster Defence Regiment and one former soldier were found guilty of the murders and received life sentences.

A report by the Historical Enquiries Team (HET) into the Miami Showband Massacre found strong evidence of RUC collusion in the murders. 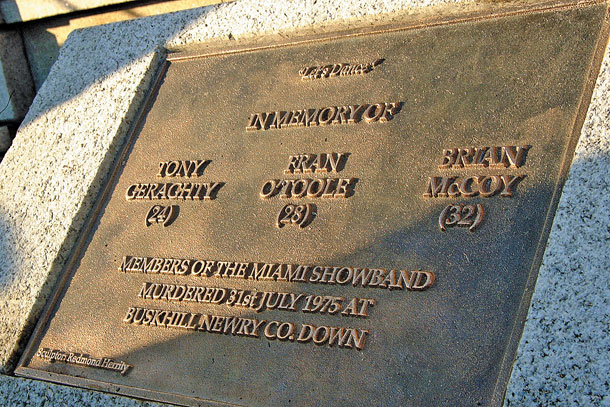 Notorious loyalist killer Robin ‘The Jackal’ Jackson, an RUC Special Branch agent as well as leader of the Mid-Ulster UVF, is said to have been linked to the attack by fingerprint evidence.

Jackson (now deceased) later said he had been tipped off by a senior RUC officer to ‘lie low’ after the Miami massacre.

The investigation into the attack by the HET found “disturbing evidence” of collusion between the RUC and the UVF leader in Mid-Ulster.?

“But it goes much further than that. Documents unearthed by the likes of Justice for the Forgotten and the Pat Finucane Centre show that the British Army knew there was a problem with loyalist subversion in the Ulster Defence Regiment for years before the attack on the Miami Showband and did nothing about it.

“The proceedings will also examine the role of Special Branch in vetting membership applications to the UDR and the use of agents such Robin Jackson.”

The case is expected to be heard next year.