Uncomfortable Conversations – Dealing with the past 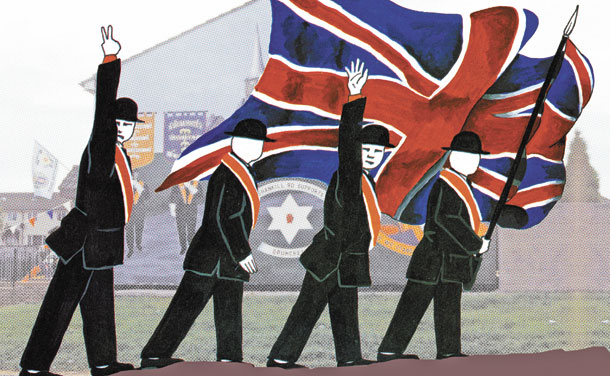 Do unionists accept any responsibility for the series of macro and micro discriminatory practices that personified this state from partition until the early 1970s?

LIVING in this part of the Empire or the north-eastern counties of Ireland was, in the early 1990s, a very daunting experience. Our jails were full of young men and women serving long and dreary prison sentences in a truly vindictive prison regime. The forces of ‘law and order’ were busy declining to comment on issues of national security while skulking in the corner as they no doubt planned to secure the ‘democratic wish’ of their paymasters in London by bold action against bolder citizens. The place was in many ways at a crossroads. The war, for want of a better word, was at a stalemate and 4,000 souls were in their graves, the vast bulk from working-class backgrounds while it became clear to those who really mattered that this level of ‘acceptable violence’ could be maintained in perpetuity.

Peace was not really on the agenda. While rumour, gossip and hearsay dominated the media and chattering classes, on the ground, life was grim, nasty, brutish and unpleasant.

The first encounter that I had with loyalism came in the form of David Ervine of the oddly-named Progressive Unionist Party (an oxymoron if I ever heard one). As part of a teaching unit I delivered to learners in the Belfast Metropolitan College, I invited him to speak on a conflict resolution programme. Let’s be frank here: I had no hope of hearing anything unusual from him. His big words and command of the English language while agreeable to the ear didn’t butter any parsnips in Andersonstown, the Bogside or south Armagh. Just another semi-literate loyalist, I thought, such is division and (I fear) my own sectarianism.

He was on his feet only a few seconds when a young woman from Ardoyne asked him: “Why did your organisation murder my father?” Before he could answer, she further asked: “Did he think it a brave act to shoot a man in the head and then in the stomach four times simply because he was seen to be a Catholic? (The man was, in fact, a Protestant from Ballymena living in Belfast with his Catholic wife from the Short Strand.)

The atmosphere in the room was very tense. Ervine looked at me. I requested that he answer the question. He rose to his feet and looked at the questioner straight in the eye and said (I am quoting him word for word):

“I never knew your father but I know he was a decent man who should be alive today. The failure of us all to deal with our dirty, squalid, brutal and nasty war is a shame to us all and especially to me and the organisation that I give advice to. I am deeply sorry for your loss and I am working night and day to ensure that these events never happen again. Please forgive me.”

• The late leader of the PUP, David Ervine

As you can imagine, there was a silence that seemed to last forever. The nature of this silence was a moment that I will never forget and it is in fact one of only two occasions that I have ever heard a loyalist apologise in any size, shape or form. So moved was this group of people that they clapped their hands, albeit briefly, and when David Ervine went to the questioner and offered his hand of friendship she accepted with dignity and grace.

The point of this story is simply to illustrate the complete lack of remorse and absolute failure of unionism to embrace the spirit and indeed letter of the Peace Process in recent years. The series of articles in An Phoblacht under the banner of ‘Uncomfortable Conversations’ and reaching out demonstrate this point to any fair-minded person.

Where does nationalism and republicanism have to go to convince unionism that their intent is in fact honourable? Do unionists accept any responsibility for the series of macro and micro discriminatory practices that personified this state from partition until the early 1970s? Do unionists really believe that the last 40 years were a criminal conspiracy or perhaps it was a genetic DNA mutation of children born in the 1950s and 1960s that brought havoc to this part of the world for so long?

In reaching out to embrace unionism, dare I ask the questions that unionists may find hard to answer from my perspective?

Do nationalists throw profanity or urine at young Protestant children on their way to school anywhere? Does the Ancient Order of Hibernians or any other neo-nationalist group demand that they march up and down the Shankill on their way to wherever just because ‘it’s their right’? Can you imagine a situation whereby a republican group took the shortest way to Milltown Cemetery on Easter Sunday coming from Ardoyne . . . via Twaddell Avenue, the Ballygomartin Road, West Circular and up the Whiterock? Well, if you can, you have a great imagination

The recent debates up in Stormont reinforce much of the unforgiving nature of unionism and their representatives. The SPAD Bill re special advisers demonises and criminalises ex-prisoners forever. This nasty piece of reactionary legislation puts people on the dole while handing a royal flush to those who wish for the swift return of violence to our streets. It was supported in full by unionist representatives and the SDLP (naturally). This was seen a victory over ‘terrorists’. Wrong language and no reaching out here to nationalism from what I can see. Then again, perhaps I am blind.

Another example of the unyielding nature of unionism can be seen in the Maze/Long Kesh project. For the record, Peter, Jim and Mike, we are in the middle of the biggest recession in 100 years. The building industry is in freefall. The project is abandoned as it might mention a hunger strike that took place there. This part of the Empire is defined by prisons. Prisons and prisoners have always taken the lead in both revolution and evolution. The North is run by ex-prisoners while others who are too smart to hear the noise of jangling keys sit on the sidelines, encouraging mean-spirited spite in the face of endless offers of friendship and peaceful co-existence. (987 young Protestants have now been charged with offences related to the flags protest. Their ability to seek work in other countries has gone, as has their ability to enter the workforce in a meaningful way.)

This nasty wee conflict seems to be a bit over, but not quite. Peace is not just the absence of violence but a little more, I believe.

Politics has replaced the gun and the bomb yet in many ways I feel that we live in a more segregated society than ever. We live apart, educate our children apart, holiday apart, while sport (the source of such unity in the world) remains sectarian, poisoned and divisive.

Bobby Sands said: “Our revenge will be the laughter of our children.” Sadly there are fewer and fewer children left. They are all in Perth, Sydney and London looking for work or lying in a graveyard, having taken their own lives in desperation at the hate-filled society they live in but couldn’t get shot of.

The time is here for unionism to stand up and be part of this debate. Either we live together or we pass the legacy down to a new generation to deal with what we should be doing now.

• Jude Whyte is a lecturer in social work in Belfast. He was the elected chair of the pilot NI Victims and Survivors Forum. He currently sits on the same group and writes here in a personal capacity. His family home was bombed twice in 1984 by the UVF. His mother died in the second explosion along with Constable Michael Dawson. He is a Marxist.