Irish and US trade unions against austerity 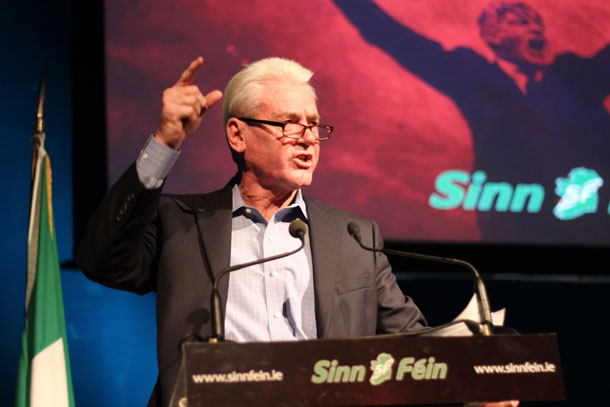 • Terry O’Sullivan, General President of LiUNA, took the roof off the Mansion House with a thundering call to arms

‘Every fibre of my being and every bit of my soul lashes out against austerity, against those who promote it, and against all the spineless, chicken-shit, cowardly politicians who went along with it’

THE RAFTERS of the historic Mansion House in Dublin were ringing on 23 October with fighting words from Irish and North American trade union leaders at a rally organised by Sinn Féin to mark the 1913 Lockout under the banner of ‘In Common Cause Against Austerity, 1913-2013’.

The event was part of a week-long visit by leaders of some of the biggest trade unions in the United States and Canada to meet their Irish counterparts, rank and file trade unionists and campaign groups to look, learn and exchange knowledge and experiences of austerity.

As An Phoblacht was told by Brent Booker, Secretary-Treasurer of the Building Construction Trades Department (AFL-CIO) – representing two million craft professionals in 13 unions across the USA and Canada – in an interview to be carried in next month’s An Phoblacht, the similarities between the US and Ireland are “eerily similar”.

The significance of the North American trade union visit was recognised by the guests being given a Mayoral Reception at the Mansion House the previous evening. During Tuesday they were taken on historical tours of Glasnevin Cemetery by Shane MacThomais, and ‘Dublin City, 1913-1916’ by James Connolly Heron and Sinn Féin Councillor Mícheál Mac Donncha.

The 400-strong crowd erupted in cheers when award-winning singing star Frances Black took to the stage to sing Ewan McColl’s ‘Legal, Illegal’, a number that rails against the values of an unjust system.

First of the trade union figures up to speak “in a hall that has in its DNA, the birth of a nation, the birth of a republic” was ICTU President John Douglas. John is also General secretary of Mandate, the retail workers’ union that gained international fame as the Dunnes Stores anti-apartheid strikers’ union, then known as IDATU.

John opened by highlighting the strike by 27 women workers at the Wallis boutique chain owned by British billionaire Sir Philip Green after the company reneged on an agreed redundancy package. (The Wallis workers won a settlement two days after the rally.)

Turning to the general situation in Ireland, the ICTU President said:

Acknowledging the strength of the 100,000 people who marched in Dublin and more around the country against austerity and for a fairer, better way, John Douglas accepted that the trade union movement had failed to develop this potential “to mobilise industrially and politically, preferring instead the once-off, show protest”. When the general election came, he said, “a defining moment” was missed. “As a result of our failure to mobilise politically, we are now condemned to a death of a thousand cuts under institutionalised austerity”

He described “synchronised austerity across Europe” as a plague.

“It is a plague of Black Death proportions: 26million workers locked out of jobs, workers’ rights ploughed into the ground, welfare and social services stripped to the bone, and yet the Left across Europe has failed to unite in common cause for a clear, alternative vision for Ireland and for Europe. We have allowed the other side to pick us off one by one: one country at a time, one group at a time. We have allowed them to control the narrative: there is no alternative; we are 85% of the way there.

“We have allowed them to turn workers against unemployed workers, against migrant workers; old against young.

“We cannot let them win.”

He said the trade union movement, progressive parties and community groups have a responsibility to give people who feel powerless the means to fight back.

“We can only do so as a united force. We have to put our differences behind us and develop a strategy to mobilise as well as a credible political strategy involving trade unions, other political parties and community groups –– a rallying point, politically mobilising a vision of a better society and a better future, ‘A Charter of Decency for a New Republic’.

“Let us understand history but let us also begin to write history. Let us organise, mobilise and fight back.”

Patricia McKeown, Regional Secretary of public sector union Unison in the North and a former President of ICTU, has been described by even the mainstream media as “tenacious” and “formidable”, Mary Lou McDonald pointed out.

Patricia said that, despite her differences with the administration at Stormont, she was pleased when Sinn Féin hosted a cross-party event to mark the 1913 Lockout but sickened when the Irish Government did the same in Dublin while at the same time denying trade union recognition. 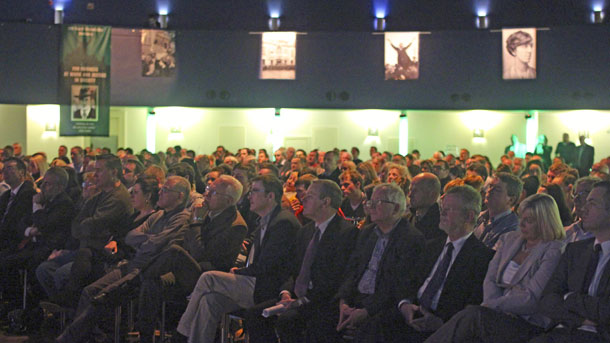 She took the audience down through the years of struggle and role of Irish women, from 1913 and Rosie Hackett, the thousands of militant women linen mill workers in the North (including Patricia’s grandmother taking part in James Connolly’s strike two years before the Lockout), Joanne Hayes and Ann Lovett in Kerry and Longford in the 1980s, and up to today, including a UN report in March of this year that declared violence against women has reached epidemic levels.

Brent Booker (who features in an interview to be carried in next month’s An Phoblacht) was next up and received huge applause when he echoed Jim Larkin’s legendary rallying call and urged people “to rise, to unite as two nations, to protect, to defend and to rally for workers’ rights”.

Then the 400-strong crowd erupted in cheers when award-winning singing star Frances Black took to the stage to sing Ewan McColl’s ‘Legal, Illegal’, a number that rails against the values of an unjust system.

Gerry Adams called for a realignment of Irish politics and said there has been a failure of leadership in the labour movement, particularly when people are facing relentless austerity and attacks on basic social protections.

“Some of this was clearly engendered by the years of social partnership when the focus of trade unions became primarily about servicing the needs of particular sectors. Some of this is also because some trade unions place too much trust in the Labour Party leadership.

“The Irish labour movement, with others, needs to provide radical principled leadership at this time.

“The vast majority of Irish people want a society that is based on values of social justice, fairness, equality and decency.

“I firmly believe that this can be achieved if we work together. This means trade union activists, community activists, individuals, political parties, like Sinn Féin, and independents of like mind joining together in common cause against austerity.”

“All of us need to be clear what side we are on.”

Terry O’Sullivan, General President of the half-million-strong Labourers’ International Union of North America (LiUNA), covering the United States and Canada, took the roof of the Mansion House with a thundering call to arms and solidarity between peoples across the Atlantic Ocean and across the globe.

Paying tribute to his grandparents’ roots in Kerry and Tipperary, Terry declared: “Many of my ancestors, like yours, were freedom fighters. And that’s why the fight for a united Ireland and the fight for social and economic justice is personal to me. It’s in my blood; it’s what I am, who I am; and what drives my values and beliefs.”

He added that, as trade union leaders:

“We believe that all work has dignity; that individual achievement depends on collective advancement, and that every human being has the god-given right to self-determination and fair representation.”

The charismatic trade union leader sees 1913 as more than a labour dispute.

“The response to the Lockout planted the seeds for social reform, for the struggle for independence and for many of the basic labour standards and protections we enjoy today.”

But it’s not enough merely to commemorate the Lockout, he said.

“We must also understand its relevance to the challenges we face today. It must inspire us to appreciate not only how far we have come, but also how far we have yet to go.”

Urging people to follow the example of Larkin and Connolly in building broad coalitions, he said:

“We are separated by 4,000 miles but united in our struggle against the same lousy economic policies that are hurting working-class families in countries around the world.

“Austerity is the cold, hard boot of the oppressor on the necks of working men and women all around the globe.

“It’s a devil’s pact with the global forces of greed. It’s the demolition of social services, of government functions, of infrastructure spending, and of the lives and futures of working-class families.

“Every fibre of my being and every bit of my soul lashes out against it against those who promote it, and against all the spineless, chicken-shit cowardly politicians who went along with it,

“I’m proud that Sinn Féin not only stood up against austerity but continues to resist it. But I am disgusted that so many so-called ‘liberal’ and ‘pro-worker’ politicians allowed it to be shoved down their throats rather than shoving it up someone else’s ass!

“If they were truly pro-worker, they would have followed the example of James Connolly who viewed capitulation as a betrayal of future generations and whose response was: ‘No, no, no!’

“We have a solemn obligation as trade unionists and activists to leave our trade unions, our organisations, our nations and the world better than the way we found them.

“We must be the spark that lights the fire of a new workers’ revolution, a revolution that puts our countries back in the hands of their most valuable asset – and that’s working men and women.

“We will raise our voices as one so that every politician and every employer knows . . . if it’s a fight you want, it’s a war you’ll get!

“We ourselves must STAND together.

“We ourselves must STAY together.

“We ourselves must FIGHT together.

“And we ourselves must WIN together.”