Managing into the future 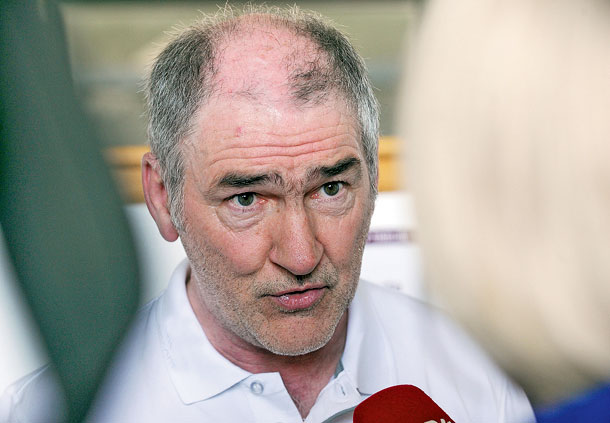 Why the zealous pursuit of managers by the media? It wasn’t always this way

AS SEASONS change, summer is followed by autumn. Darkness begins to crowd out the diminishing daylight hours. Leaves fall like confetti, dancing across the sodden ground. No more than time itself, the seasons cannot be turned back.

As with nature, so with sport.

County squads demobilise and with it the prospect of team managements being changed. Some want to move on while others sense the wind of change and opt for the drop instead of the chop. For some, however, season’s end brings an unceremonious dismissal.

The fate of some managers was decided long before the All-Ireland finals of 2013. Indeed, it was made an issue by many sports reporters and pundits. Never before have so many post-match interviews with managers included the question: “I suppose I have to ask you now, is it time to consider your position?”

It was as if television sports reporters, especially in RTÉ, had drawn sweepstakes for which county manager would be the first to fall on a sword. Or out for an emotional breakdown on live TV of some manager at his or her lowest ebb after being knocked out of an important competition.

Take, for instance, Conor Counihan, the Cork manager who has been a stirling servant of his county.

With saccharin semantics, the RTÉ journalist noted: “You’re obviously very upset, Conor.” But the question of his future tenure was still held to his throat by the interviewer after Cork’s senior footballers were beaten by Dublin. Conor subsequently announced his departure.

It was the same with Kilkenny hurling manager Brian Cody. After Cork hurlers knocked the Cats (and reigning All-Ireland champions) out at the quarter-final stage, the final question in the post-match interview with Cody was about him: his role as manager and whether he would stay on.

Why the zealous pursuit of managers by the media? It wasn’t always this way.

Before the historic appearance of Antrim U21 hurlers in their first All-Ireland final, I leafed through some past programmes and clippings. Among them was a commemorative booklet produced especially for the 1943 All-Ireland hurling final between Antrim and Cork. It’s a wonderful artefact. Players and panellists were mentioned. Names of county officials appeared. But in all 44 pages of this 70-year-old booklet, there is no reference to the team manager anywhere. I had to read it over to be sure. It’s as if there was no manager. The same box file, the same county. Now, it’s the commemorative booklet for the Antrim senior hurlers who appear in the All-Ireland final in 1989. Selectors, physio, kit manager, coach, trainer and manager all pictured within. The manager then was Jim Nelson and, in my own first-hand experience, one of the best. His last posting was to help Loughgiel to All-Ireland club glory in 2012.

Fast-forward to the 21st century and now we see a public focus upon the manager as never before.

This year has seen many take a tumble. The Sligo manager, Kevin Walsh, was publicly called upon by a former player to resign after losing to London. A short time later, Walsh did resign. It was not the only change to be subject of news comment.

The spotlight was on Jim McGuinness as he tactfully negotiated with clubs and county before agreeing to remain as Donegal manager. However, only two days after this was confirmed, public furore greeted news that three of the Donegal backroom team would be leaving, including Jimmy’s aide de camp, Rory Gallagher.

Many vacancies in other counties have emerged.

Red Hand legend Peter Canavan handed back the ‘Banaisteoir’ bib in Fermanagh. Limerick’s well-known hurling manager, John Allen, stepped down. Of all the other counties where changes occurred, the most high-profile was the acrimonious end to the six-year term of Kieran McGeeney in Kildare. Clubs in the county voted the Armagh man out. And in his inimitable way, Joe Brolly added a coup-de-grace:

“He is not and never will be a great manager. He is instead the classic loner.”

Ignore for a moment the questions which have been asked about payments to managers. Surely the value of managers is not a monetary matter. How then, is their worth to be measured?

Research in soccer suggests that the team which wins most has bought the best players. If this was true, it follows the manager is merely ornamental. But if there is any rigour to such research, it certainly doesn’t translate to Gaelic games. Good managers can and do help players become great teams. The evidence is in many counties and clubs. We are already past the point where the future of our national games are unimaginable without managers. However, what makes a good manager and how to become one is a science in its infancy.

As the mind behind Tyrone’s Gaelic renaissance, Mickey Harte, has said:

“It’s not just a football business; it’s a people business.”

He ought to know.