Jimmy was interned twice, during the 1950s and the 1970s, and was a Sinn Féin representative on Omagh District Council between 1985 and 1989 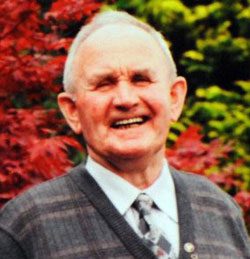 REPUBLICANISM in County Tyrone lost one of its father figures when James McElduff from Loughmacrory died on Thursday 5 September after a short illness.

Jimmy was interned twice, during the 1950s and the 1970s, and was a Sinn Féin representative on Omagh District Council between 1985 and 1989. Two of Jimmy’s four surviving siblings were also imprisoned for their Republican convictions, Joe in the Curragh and Jack was jailed in England for his IRA activities.

Jimmy was 85 years old when he passed away after a life of commitment and service to the republican cause. He had a particular grá for John Davey and Francis Hughes from South Derry as well as J. B. O’Hagan from Lurgan and Jimmy Steele from Belfast. These were mentioned men in the McElduff home, as were reliable neighbours, who ‘helped out’, such as the late Pat McGlynn.

Jimmy was married to the late Cissie and they had ten daughters and a son (also named James) who predeceased them. Jimmy himself was born into a republican family. His father, James, was captain of the 2nd Northern Division IRA during the 1920s. Jimmy’s niece, Anne Marie Fitzgerald, is the current Sinn Fein Chair of Omagh District Council and nephew Barry is an MLA for West Tyrone.

James was a quarry manager by trade and also a talented carpenter whose speciality was making old-style dressers to order. His funeral cortege was led by a lone piper and a guard of honour was provided by some of his comrades from the 1950s campaign.

Jimmy’s coffin was draped in the national flag and a graveside oration was delivered by West Tyrone Sinn Féin MP Pat Doherty.