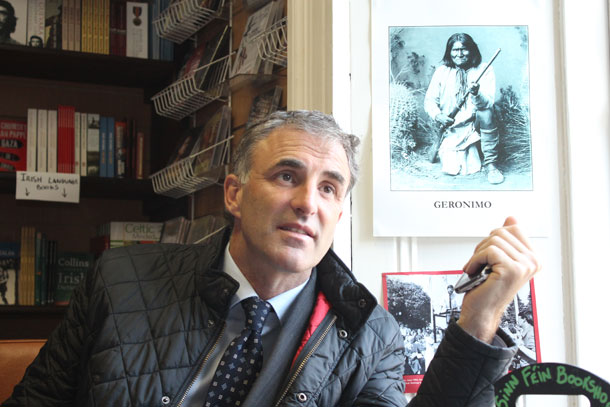 • Chris Andrews: ‘Somebody once told me ‘You fell in love with Sinn Féin in the Med’’

I MEET Chris Andrews in Dublin city centre. He has just come from his first public event since he’d announced he had joined Sinn Féin. He’d been at St Andrew’s Resource Centre on Pearse Street at the launch of ‘The Junction’, a service for young unemployed people. President Michael D Higgins was officially opening the service. Chris says at the event he got a range of reactions from those present: some were telling him “Fair play, you did the right thing”, others weren’t as approving, asking “What were you thinking?” He chuckles that some of those people who didn’t agree with his decision are the same ones who have been giving out about the Government for almost 10 years.

“Nothing happens overnight,” he says of his decision to join Sinn Féin. “For people who don’t know me and just read it in the newspaper it probably seems like a big surprise. But for anybody who was involved in community development projects or international solidarity work with me, it’s not a big shock.”

Chris was a regular attendee at the annual Easter Commemoration in Belfast and annual Bloody Sunday rememberance march in Derry.

His strong international record is something which marked him out from the rest of the Fianna Fáil TDs.

His interest in foreign affairs began in the 1980s when he went to Nicaragua as part of a solidarity brigade to pick coffee beans in the Central American country. Only a few years earlier the left-wing Sandinista National Liberation Front (FSLN) had overthrown US-backed dictator Somoza. Since this initial experience, Chris has been an outspoken voice on international issues, particularly the plight of the Palestinian people.

Talking about Palestine, I mention Waterford Sinn Féin Councillor John Hearne. Chris immediately cracks a smile. “I shared a jail cell with him,” he laughs.

In 2011, Chris and a number of Sinn Féin and left-wing activists were arrested by Israeli commandos while crewing the MV Saoirse, carrying relief supplies to break the siege of Gaza. During their imprisonment John had asked Chris whether he would consider joining Sinn Féin. He says the whole incident did have some bearing on his decision. 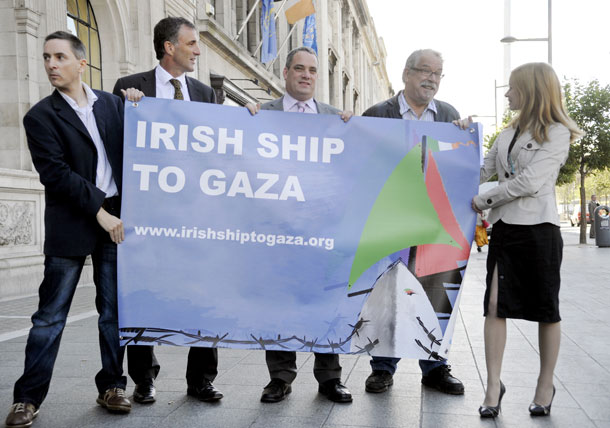 “You couldn’t have anything other than the height of respect for John and [Sinn Féin Councillor] Pat Fitzgerald and their commitment to the Palestinian cause. And that obviously has an impact on you at some level. Somebody once told me ‘You fell in love with Sinn Féin in the Med’.” Chris laughs heartily.

So what of his decision to join Sinn Féin? What was the reaction like from his former party colleagues and friends?

“I got a lot of goodwill from former colleagues from Fianna Fáil,” he says. “I got a fair number of private messages from people within the organisation who don’t want to be seen to come out publicly because the hegemony within the party is that ‘Chris is bad’. Of course, you have the people who are particularly intense and partisan but they seem to play the man instead of the ball. You just have to get on with it. That’s politics.”

He says instead of focusing on personality-led politics, it would be more beneficial for the Establishment and mainstream media and commentators to have real debates on the social and economic policies that parties are putting forward.

He tells An Phoblacht that, over the past 15 years, Fianna Fáil has almost become unrecognisable from the party his grandfather helped found. In particular he says there is a serious disconnect between the party and those ordinary people it claims to represent - something which deeply contrasts with Sinn Féin’s grassroots activism.

He admits he went through a long period of disillusionment before finally deciding to break with Fianna Fáil.

“For me, the last five years were a game-changer. I emigrated to England in the late 1980s. When I came back in the 1990s, Ireland seemed to have changed for the better. But then it began to dawn that this was all built on sand. Whatever about who’s to blame, we know now that what was done was wrong. It’s important to identify who is responsible but it is even more important that we change the way we do things. There’s no commitment at all within Fianna Fáil to change or reform. There is a need for change and Sinn Féin is the party I genuinely feel will bring that about.”

Since the 2011 general election, Fianna Fáil have been pushing the self-styled ‘Fianna Fáil Renewal’, claiming the party is getting back to being a grassroots organisation. Chris’s reaction to such claims is blunt. “Personally, I don’t buy it.” 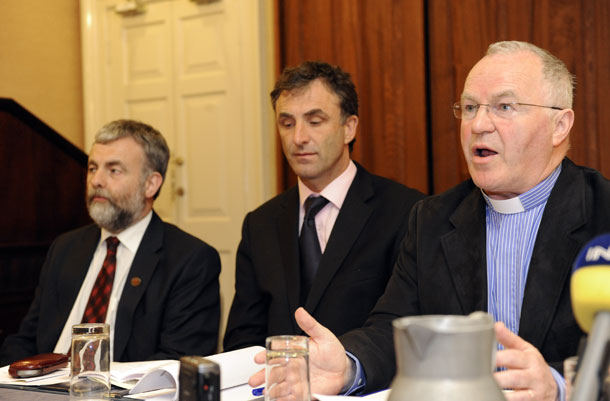 •  Chris Andrews at a Seán Garland Anti-Extradition Campaign event in 2009 alongside SIPTU President Jack O'Connor and Chris Hudson. The campaign opposed the extradition of Garland to America on humanitarian grounds

He also points to Sinn Féin’s commitment to a united Ireland as being a major factor in his decision. He says Fianna Fáil have abandoned even the pretence of republicanism. His grandfather, Todd Andrews, an IRA Volunteer who served in the Tan War and Civil War, helped found Fianna Fáil and was deeply commited to Irish reunification.

His own father, Niall, served as a Fianna Fáil TD and MEP between 1977 and 2004. Chris points out that his father was one of the few TDs to visit the Hunger Strikers in prison. Niall Andrews also attended the funeral of Bobby Sands MP and was strongly involved in the ‘Bring Them Home’ campaign for the Colombia Three, helping raise their case at the European Parliament as an MEP. On Niall Andrews’s death in 2006, Seán Crowe TD said he was a man “who did not let party political affiliations stand in the way of a genuine commitment to human rights in Ireland and further afield”, adding how he was one of the few TDs to show solidarity with Northern nationalists “a beleaguered community ignored by so many in the South”.

Observers have criticised Chris’s term as a TD under Bertie Ahern and Brian Cowen, noting that he followed the party line right up to the last days of the Fianna Fáil government. Chris points out that he was only a TD for a year under Bertie Ahern. “I was only barely in the door and finding my feet in Leinster House and next thing there was a change of leadership. With Cowen, I was one of the few at the time who stood up and told him he should resign and there should be an election. This was a long time before many others did so.”

He also stresses that he was elected as a Fianna Fáil TD and therefore had to support the party position which sometimes ran contrary to his own views. It’s something he says he has serious regrets about doing, describing his support for regressive Budgets as “wrong”.

“In hindsight,” he says, looking straight at me. “I should have made a stronger stand or left the party when I saw the way things were being done. But hindsight is a wonderful thing.”

There’s been media speculation that he joined Sinn Féin so that he could have a chance of being re-elected as a TD. Chris says he has no burning desire to be sitting in Leinster House anytime soon. “Being a TD isn’t all it’s cracked up to be,” the former backbencher says before adding:

“If it was all about me wanting to be a TD, first of all you’d go to a different constituency: Dublin 4 — Rathmines and Pembroke — is hardly a hotbed of Sinn Féin support. It would have been personally a lot easier for me to stay indepenent and just work on different community issues. You wouldn’t have got the hassle and the abuse. Instead, people would have had a more benign attitude towards you. But if I’m in favour of collective action and advocating change, then I have to commit to it myself.”