The Irish in Scotland ‘struggling for respect’ 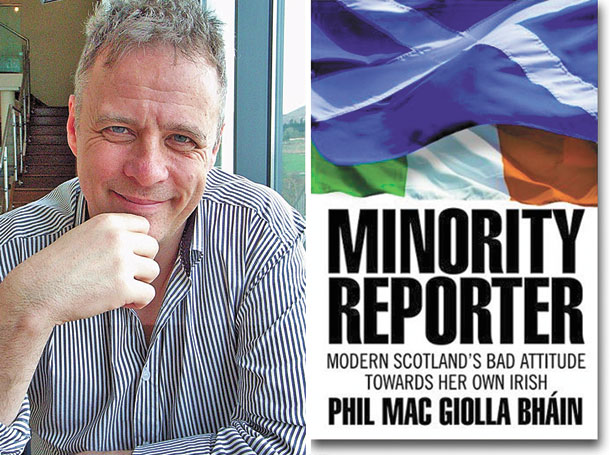 IT’S A STRIKING THOUGHT that the Irish in Glasgow achieved occupational parity a full hundred years AFTER their cousins in New York.

Moreover, the Irish in Scotland still face a struggle just for recognition and respect.

Phil Mac Giolla Bháin’s new book, Minority Reporter: Modern Scotland’s Bad Attitude Towards Her Own Irish, lays out the reality of their experiences, particularly in Glasgow and the west of Scotland, and it makes for sobering reading.

The book charts how discrimination has manifested itself in the country and how the approach of slapping a label of ‘sectarianism’ on the problem — as opposed to discrimination against an ethnic group — has made it impossible to tackle with any effect.

Mac Giolla Bháin argues that what remains in Scotland is attitudinal discrimination (a view echoed by Professor Tom Devine) and with a referendum on independence due to take place a year from now, there are important issues for the Irish in Scotland to consider.

Of course, Scotland’s Irish community played an important part in the Northern conflict. When the Bogside breathed CS gas and the Lower Falls was under curfew, the Irish in Glasgow did not need ‘The Man from the Daily Mail’ to put them right on what was what. 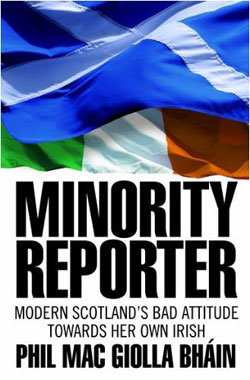 The idea of Irish people under a local regime that was hostile to Irishness wasn’t such a leap of the imagination for an O’Donnell in the Gorbals or a Murphy in Greenock. Not surprisingly, the Republican Movement attracted a huge amount of support from probably the most socially excluded part of the Irish Diaspora.

But as Ireland moves forward with a demilitarised political plan, the Irish community in Scotland have, to an extent, returned to their own internal fight for recognition and respect.

In three sections, Mac Giolla Bháin explores the root of the problem and puts forth his central argument that the ethnic element of the ‘sectarian’ problem in Scotland has been swept aside in favour of a narrative of football rivalry mixed up with religion.

That said, the football element is important. In The Famine Song section and in the final portion of the book, ‘An Illicit Ethnicity?’, Mac Giolla Bháin explores the relationship between Rangers Football Club and the loyalist/unionist culture in the Six Counties.

Furthermore, Mac Giolla Bháin uses some thorough research into the team history at Ibrox to debunk the myth that the problem at the former club was one of religious bigotry, thus exposing the extent to which ethnicity was written out of the story. Since the Football Association of Ireland was formally recognised by FIFA at the end of World War Two, Rangers (1872 to 2012) failed to sign a single Republic of Ireland international for their first team, making it the only club in Britain with that record.

The author charts several years of campaigning journalism in each section, containing a lengthy intro providing context and history followed by a selection of pre-published pieces documenting Mac Giolla Bháin’s work on the subject since 2008.

The middle section of the book is key.

The experiences of one Neil Francis Lennon from Lurgan, the manager of Glasgow Celtic, are shameful. Since taking up his role at the club founded by Irish immigrants seeking refuge after the Famine, Lennon has been physically attacked on more than one occasion and the situation reached a terrifying peak when he was on the receiving end of a letter bomb in 2011.

Lennon became symbolic and for all the wrong reasons at Ibrox. An Irish Catholic from the North standing in pride of place at the helm of Celtic; an “uppity Fenian” as Mac Giolla Bháin describes him, and Rangers fans’ worst nightmare.

Mac Giolla Bháin lays out a compelling case not only of anti-Irish racism in Scotland but the lengths to which the authorities, be it football or government, have consistently failed the Irish community and the continuing reluctance to change the record.

For the Irish and Irish descendants in Scotland, the death of Rangers was about more than football. Like the Ibrox club, the superiority of ‘the klan’ over the Irish community is broken.

Minority Reporter almost has a happy ending, if a cliché can be used. Plans for a Glasgow city centre Famine memorial are now under way and the Irish, Mac Giolla Bháin says, no longer sit at the back of the bus.