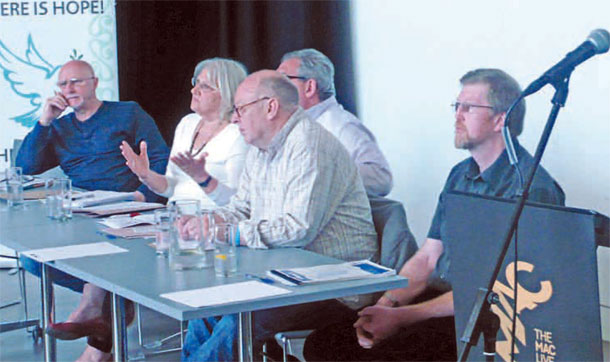 THE recently-released Beyond the Wire DVD features courageous contributions to the debate about how former political prisoners have tried to cope with the effects of imprisonment on their emotional and psychological well being as they adjust to life in the post-conflict world of today in Ireland.

It also explores how trauma and the effects of Post Traumatic Stress Disorder (PTSD) are at the core of many problems faced by political ex-prisoners.

Speaking at the launch of the DVD in Belfast’s Mac Centre, Ruth Jamieson (formerly of Queen’s University’s Institute of Criminology and Criminal Justice School of Law) likened the experience of former prisoners to that of “other veterans, prisoners of war, or emergency service workers — the big difference is those groups have state-provided assistance available but political ex-prisoners here don’t”.

“Many families continue to live with the legacy of incarceration without understanding the impact it brings to bear on their lives.”

According to the research carried out by Jamieson, Shirlow and Grounds “it is difficult to make a precise estimate of their [former political prisoners] current numbers or age profile” as there are few official reports or statistics on the number of people imprisoned. 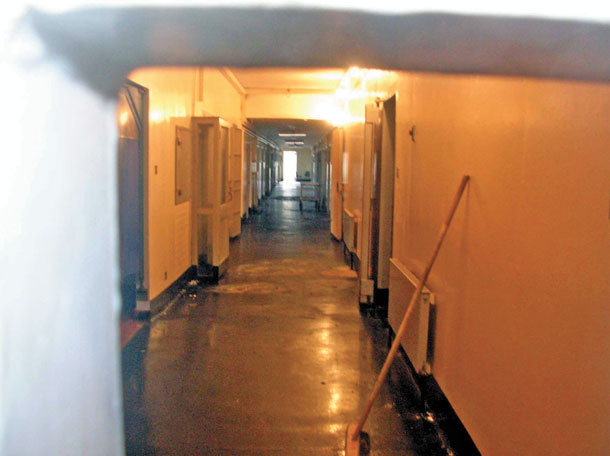 One of those who speaks on Beyond the Wire of her experience of imprisonment is Brenda Murphy from Ballymurphy.

Imprisoned during the ‘protest years’ of the late 1970s and early 1980s, Brenda has honed her talents as a popular playwright with many successful productions to her name.

Brenda was pregnant when she was arrested in 1976. After she was sentenced she joined the protest in Armagh Prison, refusing to carry out prison work and while on the ‘no work protest’ her daughter was born.

On the DVD, Brenda speaks candidly and emotionally about her treatment at the hands of the prison authorities.

In an attempt at emotional and psychological blackmail the authorities gave Brenda an ultimatum: she could keep her daughter with her if she came off the protest; if she refused, she would be forced to send her child away to be cared for.

An emotionally conflicted Brenda refused to abandon the protest and her jailers made her send her child outside to be looked after by her grandmother.

Speaking on the DVD, the west Belfast republican explained that prison rules allowed a mother to keep her child with her for up to a year or, if she was due to be released soon after the year was up, she could her keep baby with her. As Brenda only had about six months of her sentence left she argued she should be allowed to keep her baby with her. The prison authorities were unmoved. She could only keep the infant with her if she left the protest. Her distress is clear as she relates the story and explains how she had to “sign” her baby out like an item of property.

What was more upsetting though, Brenda recalls, is how her daughter once told her, “You loved the Republican Movement more than you loved me.”

Although the DVD was the initiative of the republican ex-prisoner groups, the experience of unionist prisoners is also acknowledged.

Ruth Jamieson described the case of a unionist ex-prisoner who, when he couldn’t access necessary treatment, “basically drank himself to death”. 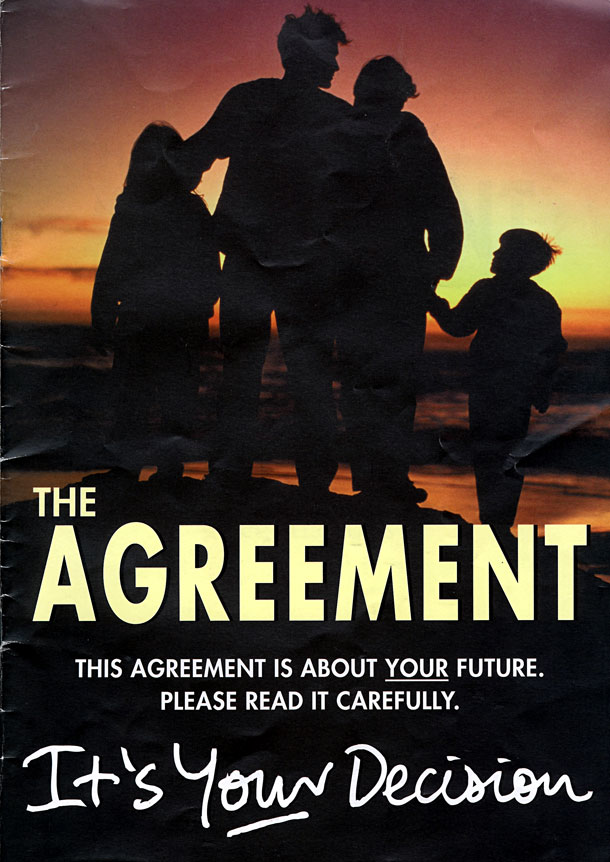 • ‘The [British and Irish] governments continue to recognise the importance of measures to facilitate the reintegration of prisoners into the community by providing support for both prior to and after release, including assistance directed towards availing of employment opportunities, retraining and/or reskilling and further education’ – The Good Friday Agreement

Not only does this case touch on the experience of ex-prisoners who indulge in what she describes as “hazardous drinking”, it crucially focuses on the legal barriers that are in the way of ex-prisoners seeking therapeutic intervention.

She outlines how the unionist ex-prisoner, “a really bad alcoholic”, was referred for counselling and the first thing the counsellor said was: “I don’t want to hear anything about the conflict.”

Says Jamieson: “The guy just went home and basically drank himself to death.”

To better understand the need for and the reasons behind Beyond the Wire we should study the report Ageing and Social Exclusion Among Former Politically Motivated Prisoners.

Although published back in September 2010, the report’s relevance is clearly demonstrated when viewed in the context of hardline unionist MLA Jim Allister’s Private Member’s Bill passed at Stormont to exclude political ex-prisoners from working as special advisers (SpADs) to ministers.

Commenting on ‘Citizenship and Exclusion’, the report says:

“Politically-motivated prisoners are often seen as having primary responsibility for the conflict . . . and are supposed to bear the stigma of a ‘criminal’ status.”

Clearly, the ideological cornerstone of Allister’s Bill (which was supported enthusiastically by the other unionist parties) is the need to blame prisoners for the conflict.

Needless to say, this thinking is fixed firmly in the debate about who or what is a victim and lends itself to promoting a hierarchy of victimhood.

The report argues that former prisoners have “conditional citizenship [which] is a more or less permanent condition. So, in addition to having to manage a stigmatised identity, former political prisoners are permanently excluded by law from particular occupations or actions (e.g. adoption).”

“Hence many former political prisoners argue that these restrictions on their work and family life amount to a ‘residual criminalisation’, the effect of which is to entrench and perpetuate their social and economic marginalisation.”

Indeed, the report identifies “continuing criminalisation” as one of the most “powerfully exclusionary processes affecting former politically motivated prisoners”.

Comparing the reality experienced by former prisoners to the expectations raised by the Good Friday Agreement, the authors say:

“Whilst it is important to be cognisant of the varied emotional and psychological needs of all members of a society emerging from conflict our analysis is centred on the only section of that society that remains legally debarred from full participation in many areas of social and economic life.”

The 1998 Good Friday Agreement says in Section 10 on prisoners:

“The governments continue to recognise the importance of measures to facilitate the reintegration of prisoners into the community by providing support for both prior to and after release, including assistance directed towards availing of employment opportunities, retraining and/or reskilling and further education.”

More than a decade after the Good Friday Agreement, the negative and debarring legislation that affects politically-motivated former prisoners such as adoption, travel, legal entitlement and employment remained.

“A key stumbling block,” say the authors, “in the development of a more inclusive role for politically-motivated former prisoners is that the law makes no differentiation between criminal activity and political conflict, this despite the onset and development of a post-conflict society that has been tied to the concepts and principles of parity of esteem, mutual consent and inclusion.”

If the recent debate at Stormont fuelled by Jim Allister’s ‘bad legislation’ Bill tells us anything it is (as Jamieson, Shirlow and Grounds say in their research) that “most of the negativity that surrounds debates about politically-motivated former prisoners has centred on past violent acts and the need to maintain social, cultural, symbolic and legal criminalisation. In effect, the development of the peace and political transformation has been paralleled by the debarring of politically-motivated former prisoners from full citizenship.” 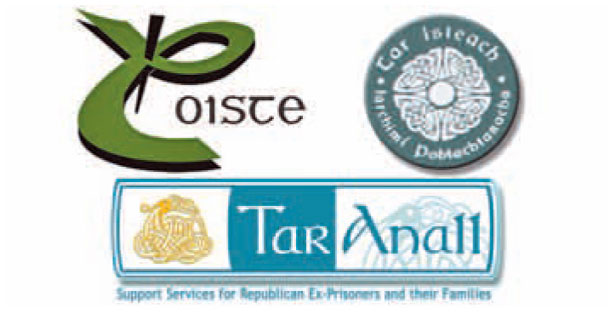 The research on which this report is based was funded by the Changing Ageing Partnership (CAP) through its research seed grant programme R9162LAW. The Community Foundation NI funded its production.

The DVD Beyond the Wire was produced by Coiste Na n-Iarchimí, Tar Anall and Tar Isteach and was funded by the Belfast Strategic Partnership.