We are in resolution mode 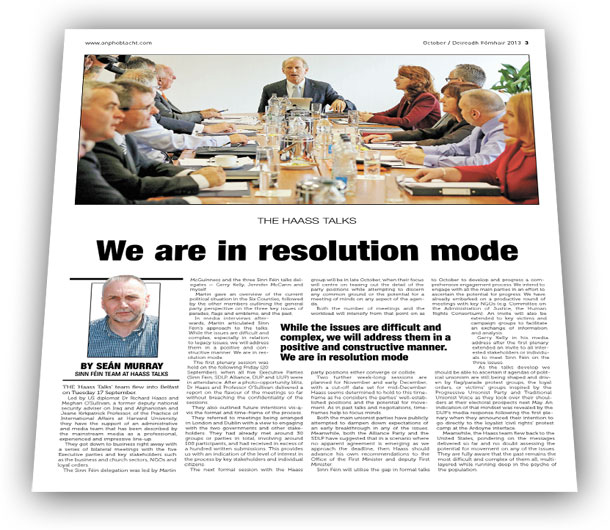 THE ‘Haass Talks’ team flew into Belfast on Tuesday 17 September.

Led by US diplomat Dr Richard Haass and Meghan O’Sullivan, a former deputy national security adviser on Iraq and Afghanistan and Jeane Kirkpatrick Professor, of the Practice of International Affairs at Harvard University, they have the support of an administrative and media team that has been described by the mainstream media as a professional, experienced and impressive line-up.

They got down to business right away with a series of bilateral meetings with the five Executive parties and key stakeholders such as the business and church sectors, NGOs and loyal orders.

The Sinn Féin delegation was led by Martin McGuinness and the three Sinn Féin talks delegates — Gerry Kelly, Jennifer McCann and myself.

Martin gave an overview of the current political situation in the Six Counties, followed by the other members outlining the general party perspective on the three key issues of parades, flags and emblems, and the past.

In media interviews afterwards, Martin articulated Sinn Féin’s approach to the talks. While the issues are difficult and complex, especially in relation to legacy issues, we will address them in a positive and constructive manner. We are in resolution mode.

The first plenary session was held on the following Friday (20 September), when all five Executive Parties (Sinn Féin, SDLP, Alliance, DUP and UUP) were in attendance. After a photo-opportunity blitz, Dr Haass and Professor O’Sullivan delivered a report on the flavour of the meetings so far without breaching the confidentiality of the sessions.

They also outlined future intentions vis-à-vis the format and time-frame of the process.

They referred to meetings being arranged in London and Dublin with a view to engaging with the two governments and other stakeholders. They had already met around 30 groups or parties in total, involving around 100 participants, and had received in excess of a hundred written submissions. This provides us with an indication of the level of interest in the process by key stakeholders and individual citizens. 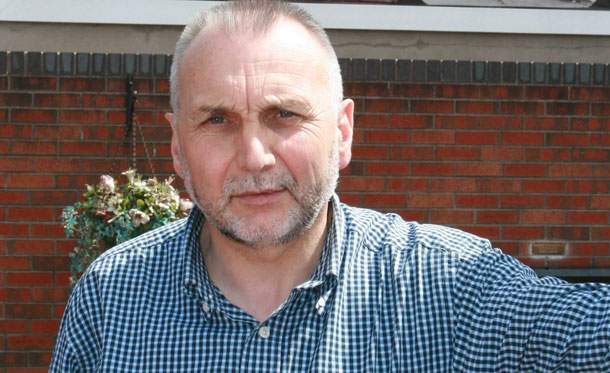 The next formal session with the Haass group will be in late October, when their focus will centre on teasing out the detail of the party positions while attempting to discern any common ground or the potential for a meeting of minds on any aspect of the agenda.

Both the number of meetings and the workload will intensify from that point on as party positions either converge or collide.

Two further week-long sessions are planned for November and early December, with a cut-off date set for mid-December. Haass seems determined to hold to this time-frame as he considers the parties’ well-established positions and the potential for movement. As in past talks and negotiations, time-frames help to focus minds.

Both the main unionist parties have publicly attempted to dampen down expectations of an early breakthrough in any of the issues. Meanwhile, both the Alliance Party and the SDLP have suggested that in a scenario where no apparent agreement is emerging as we approach the deadline, then Haass should advance his own recommendations to the Office of the First Minister and deputy First Minister.

Sinn Féin will utilise the gap in formal talks to October to develop and progress a comprehensive engagement process. We intend to engage with all the main parties in an effort to ascertain the potential for progress. We have already embarked on a productive round of meetings with key NGOs (e.g. Committee on the Administration of Justice, the Human Rights Consortium). An invite will also be extended to key victims and campaign groups to facilitate an exchange of information and analysis.

Gerry Kelly in his media address after the first plenary extended an invite to all interested stakeholders or individuals to meet Sinn Féin on the three issues.

As the talks develop we should be able to ascertain if agendas of political unionism are still being shaped and driven by flag/parade protest groups, the loyal orders, or victims’ groups inspired by the Progressive Unionist Party and Traditional Unionist Voice as they look over their shoulders at their electoral prospects next May. An indication of that mindset was revealed by the DUP’s media response following the first plenary when they announced their intention to go directly to the loyalist ‘civil rights’ protest camp at the Ardoyne interface.

Meanwhile, the Haass team flew back to the United States, pondering on the messages delivered so far and no doubt assessing the potential for movement on any of the issues. They are fully aware that the past remains the most difficult and complex of them all, multi-layered while running deep in the psyche of the population.