Colin Parry talks to An Phoblacht 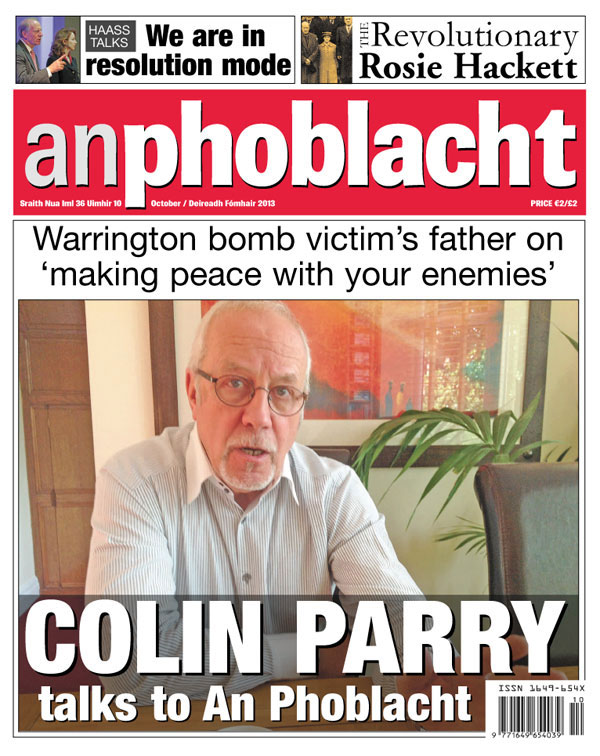 ‘We’ve always said we will speak to anyone. We want to break down barriers’ – Wendy Parry speaking at the Warrington 20th anniversary memorial events at the Stormont Assembly, March 2013

ON 20 March 1993, the IRA detonated two bombs in Warrington town centre, killing two children. Three-year-old Johnathan Ball died instantly; 12-year-old Tim Parry died five days later in hospital. More than 50 other people were injured, four seriously. The IRA said police had failed to act on warnings. The An Phoblacht Editorial of 25 March 1993 detailed the circumstances of what it called a “tragedy” and said “a child’s death strikes everyone in a most heartbreaking way” but added: “That said, no words of republicans can excuse or explain away the deaths in Warrington.” 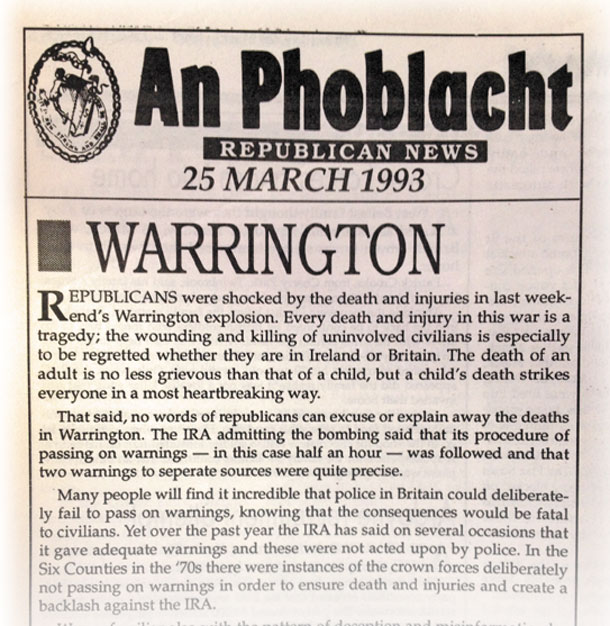 COLIN PARRY, I was told at meetings of senior Sinn Féin figures in Belfast and Dublin involved in the ‘Uncomfortable Conversations’ initiative chaired by Declan Kearney, was prepared to give an interview to An Phoblacht.

Colin and his wife, Wendy, had invited deputy First Minister Martin McGuinness to give the 2013 Peace Lecture at the Tim Parry & Johnathan Ball Peace Centre in Warrington.

In more than 30 years, this was my most daunting assignment with An Phoblacht. That paled into insignificance with what Colin Parry and his family have gone through.

Colin doesn’t forgive the IRA for taking the life of his son, Tim. Nevertheless, he does recognise the need for dialogue to try and resolve conflict.

He tells An Phoblacht, “I haven’t forgiven the IRA for killing Tim, nor has anybody in my family and we never will,” but he adds: 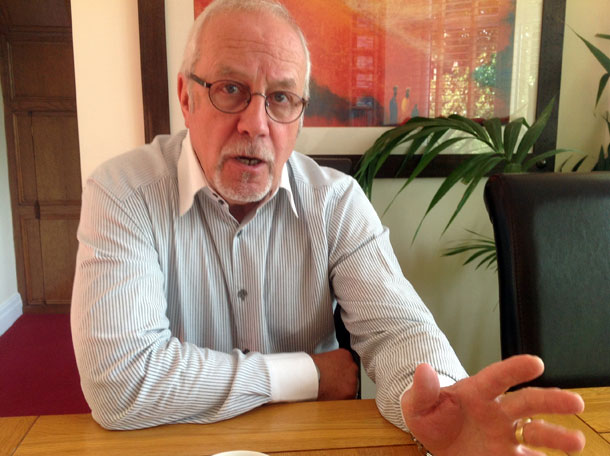 WARRINGTON sits on the banks of the River Mersey, 18.5 miles east of Liverpool and 16 miles west of Manchester. It has a population of just over 200,000.

I arrive in the Cheshire town almost 12 hours before deputy First Minister Martin McGuinness is to give the 2013 Peace Lecture. There’s huge media interest. Colin Parry has been doing non-stop media interviews with broadcasters and newspapers from all over Britain and Ireland. He’s had to take a day off work to manage everything to do with the historic address by the Sinn Féin Chief Negotiator who was once a senior figure in the IRA. “People see him as the face of the IRA,” Colin tells RTÉ News in response to a question about a planned protest by a couple whose sister was among the 21 killed in the 1974 IRA bombings in Birmingham.

Peace Centre Chief Executive Nick Taylor and I have been in contact over the previous three days to firm up details of An Phoblacht’s meeting with Colin Parry. I call him from the town centre, not far from where Tim Parry and Johnathan Ball lost their young lives. We have a problem.

Colin’s mainstream media demands mean he cannot meet me in town as we’d hoped. I’ll have to go out to the family home.

I take a taxi out to a suburb of Warrington and ring the bell, my heart pounding. Colin answers the door with one hand, his mobile in the other. He beckons me in while still answering media questions about inviting Martin McGuinness and the criticisms of it.

Colin asks if I’d like something to drink. My mouth is dry but I’ve already downed several cups of coffee on my way from Liverpool’s John Lennon Airport and my stomach is in knots with nerves made worse by my desire to be even more respectful of the Parrys and where I am.

This is the family home where Tim Parry spent his young life with his parents and brother and sister Dominic and Abbi. It was upstairs in Tim’s bedroom that a distraught Colin and Wendy Parry began their determined campaign for peace and reconciliation, one that grew into the Foundation for Peace and a purpose-built £3million building on the outskirts of Warrington opened by former Secretary of State Mo Mowlam in March 2000.

The Foundation for Peace describes itself as: “An independent global leader in commissioned conflict response, resolution and preventative services.”

One of its grassroots initiatives that Colin proudly but quietly tells me about is a schools programme in England addressing inter-racial conflict and the influence of the far-Right English Defence League and jihadists.

Colin and I sit down facing each other across a dining table. He matter-of-factly brushes away my offer to go through my questions and says to just ask what I want.

Colin and Wendy had been invited by the Speaker of the Assembly and the Office of the First Minister and deputy First Minister to address MLAs in March of this year on the 20th anniversary of Warrington. Colin interviewed Martin McGuinness for a BBC Radio 5 Live documentary in April.

“The interview had been cordial and productive and when I was leaving the office it popped into my head that we didn’t have a speaker lined up for this year’s Peace Lecture. I spontaneously asked Martin if he would he give the Peace Lecture. Much to my surprise, he immediately said yes.” 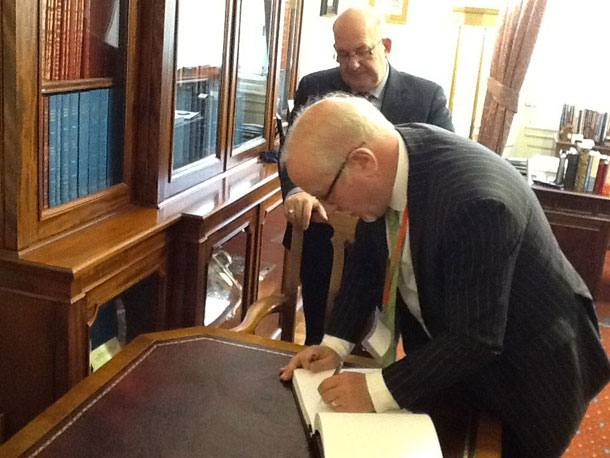 The Peace Lecture was inaugurated in 1993 by former Prime Minister John Major, a patron for the Foundation for Peace charity; subsequent lectures were given by John Reid (former Secretary of State in the North of Ireland) and Justice Secretary Jack Straw.

“John Major has been extremely supportive of what we have been doing ever since because he can remember how deeply [Ireland] affected him on his watch,” Colin tells An Phoblacht.

I raise Martin McGuinness’s IRA past.

“I don’t forgive the IRA,” Colin says, “but many people raise it as precondition for what you do.”

He is puzzled that some friends among the 170 guests invited to the Peace Lecture declined.

“I said to my wife, why would people who know our position and who are friends say ‘I don’t want to be there to listen to Martin McGuinness’ when we had extended the invitation.

“The guiding principles of our Peace Foundation are around the whole notion of peace building and reconciliation and, inevitably, that is done with people who you might not otherwise have a dialogue with. You don’t need to peace build with friends, do you?”

Colin and Wendy have had “a difficult meeting” with the brother and sister bereaved by the Birmingham bombs and planning to picket the Warrington Peace Lecture because no one has been convicted for their sister’s death.

“My wife and I clearly empathise with them and understand what they are seeking but that is not what we seek. We have never sought to find the people who did the Warrington bombing. And the reason for that is quite simple: if my focus was entirely on who killed my son I think I would have ended up criminally insane and never able to lead a normal life, which would have had implications for the rest of my family, never mind for Tim. So we’ve always focused on the present and the future, not the past.”

Parades, flags and the past

Colin Parry welcomes the arrival in Ireland of US diplomat Dr Richard Haass and Harvard Professor Meghan O’Sullivan to chair inter-party talks dealing with parades, flags and the past.

“I wish them all the success in the world.

“I don’t preach to anybody but it seems to me that if they can break the log-jam on flags, parades and protests then that’s good because — even if people on this side of the Irish Sea think ‘What are they moaning about?’ — these are hot issues that need to be resolved.”

Colin adds that although they may be “hot issues” they are “in a sense, side issues which impede the smooth transition to a normal, fully functioning society in Northern Ireland which I think we all hope for. No one wants it to go back to the way it was.”

What would Colin Parry like to see happen after Martin McGuinness’s Warrington Peace Lecture?

“It would be good if those who still distrust Martin McGuinness — and that might be particularly people in the loyalist community — as less than fully wedded to the Peace Process and less than sincere were to recognise that him coming to our Peace Centre to address a predominantly Warrington and English audience that may still have very little sympathy for him, given his own history, takes some bottle. Us extending that invitation to him, I want it to be seen as the kind of thing that others have to do, that other people have to step over that line if there is to genuinely be progress and movement.

“If everybody says ‘You move first and I don’t move’ then little happens, so I would hope that the symbolism of Martin McGuinness being the speaker, invited by me as Tim’s father, is of itself significant and it would be good if it was a touchstone for other things to flow from it.” 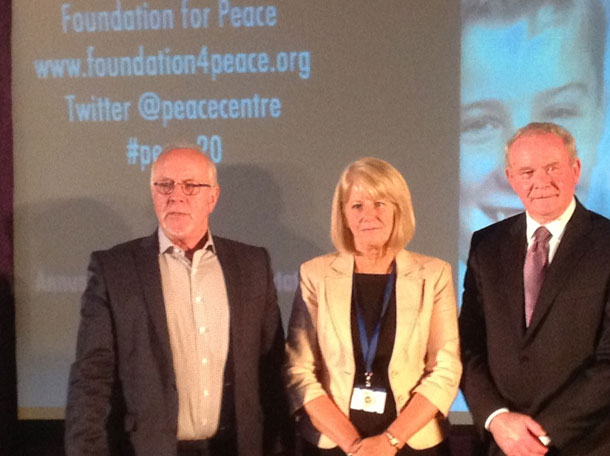 “AS a republican leader it would be hypocritical for me to seek to distance myself from the consequences of armed struggle or the IRA’s role in it.

“Nor can or would I attempt to excuse the human loss caused by the IRA bomb in Warrington.

“Regrettably, the past cannot be changed or undone. Neither can the suffering, the hurt or the violence of the conflict be disowned by republicans or any other party to the conflict.

“None of this, of course, offers any comfort to the many victims of the conflict, from all sides, including and in particular the many hundreds of innocent victims, including Tim Parry and Johnathan Ball . . .

“I was once in the IRA. I am now a peace builder. I don’t expect anyone to take me at my word. I expect them to take me by my deeds. I have spent 20 years building the peace. But peace building, like conflict, is a joint enterprise. I challenge all of the parties to the conflict to pledge their commitment to the type of acknowledgement, respect and compromise we need to move forward in the years ahead.”

The full speech can be read at www.sinnfein.ie/contents/27506