Guinness's – 'Steadfast in their loyalty to the British crown' 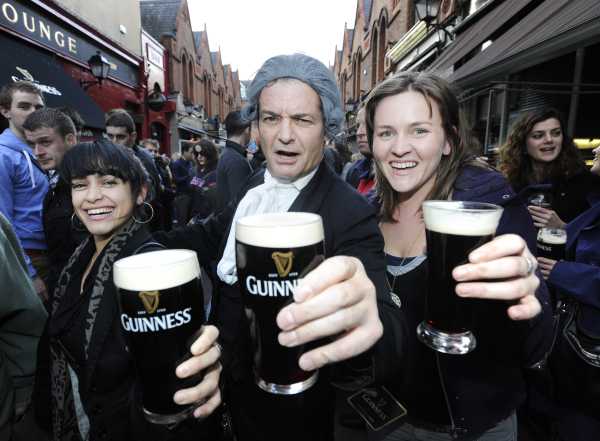 Arthur's Day celebrations on the streets of Dublin

Arthur Guinness was a unionist and suspected of being an informer for the British; and a descendant, Lord Iveagh, donated £100,000 to the UVF arms fund in 1913, provoking a boycott of Guinness products

'ARTHUR'S DAY', that ingenious marketing campaign thought up in 2009 to mark the 250th anniversary of the Guinness brewing company and to raise further sales of 'the black stuff', will be celebrated most of all by executives, sales teams and shareholders on Thursday.

According to Diageo (the British-based conglomerate which now owns Guinness), on 26 September every year:

“Guinness fans around the world will come together at a series of exciting musical events to raise a glass to Arthur Guinness and celebrate those who like him, make great things happen.”

Guinness is happy to play upon its perceived Irishness to promote this now annual event.

Rarely is it mentioned that founder Arthur Guinness was a unionist, completely opposed to independence for Ireland.

In 1797, Arthur Guinness was named by the The Union Star newspaper as a suspected informer. He was described as:

“A brewer at James's Gate, an active spy. United Irishmen will be cautious of dealing with any publican who sells his drink.”

“Arthur's successors in St James's Gate were definitely steadfast in their loyalty to the British crown. His descendant, Lord Iveagh, donated £100,000 to the UVF arms fund in 1913.”

In response to the donation to the UVF, nationalists organised a boycott of Guinness products. Michael Conway, later an IRA Commandant in Limerick, remarked:

“For a time, only Murphy's stout was consumed locally but, after a while, the boycott eased.”

During the fighting in 1916, trucks used by Guinness's were converted into improvised armoured fighting vehicles (pictured) by the British Army and used against republican forces. One such 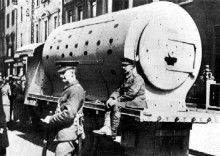 vehicle was made by bolting four boilers onto the rear of a Guinness's flatbed truck. These were believed to have been the first armoured cars used in Ireland. There are conflicting reports over whether these vehicles were commandeered by the British Army or donated to them by Guinness & Co.

On 29 April 1916, the Royal Dublin Fusiliers murdered civilians William John Rice and Algernon Lucas (along with two off-duty British soldiers) in the grounds of the Dublin brewery. The sergeant who ordered their execution claimed they were members of Sinn Féin. Two of the men were Guinness employees. Guinness Company Director H. W. Renny Failyown said:

“There was nothing in the evidence of the recent court martial to justify any suggestion [the staff] were in any way connected with, or in sympathy with, the Sinn Féin rebellion.”

Indeed, the company took a hard line with anybody displaying any form of support for Irish republicanism or nationalism.

Following the 1916 Rising, Guinness's was one of a number of companies which dismissed staff suspected of involvement in the rebellion or sympathetic to those who took part.

In a statement to the Bureau of Military History, Robert Holland, a member of the Irish Republican Brotherhood who fought with the Irish Volunteers in 1916 described the dismissals as “a form of censure for their disloyalty to His Majesty . . . GS&W Railways had gone further and evicted families of men dismissed from their dwellings. Arthur Guinness, Crampton's, H&J Martin's, Becket's had followed suit.”

Charles Saurin, a member of the Dublin Brigade of the Irish Volunteers, was one of a number of republicans marched past the Guinness brewery at the end of the Easter Rising, having spent the previous night under armed guard in the grounds of the Rotunda Hospital. He described:

“Going past the office of Messrs Arthur Guinness & Co, shirt-sleeved officials were leaning out of the windows looking at us with superior, contemptuous smiles.”

Even as late as the 1980s the Guinness corporation was willing to cast off its long association with Ireland. Edward Guinness, then a PR guru for the company “was no longer sure the association with Ireland was helpful” due to the conflict in the North of Ireland and the refusal of the Irish Government to back the British during the Falklands/Malvinas War. Edward Guinness said the brewery may have to “emphasise facts such as that Guinness was an English company”.