Corrib ‘booze for gardaí’ claims: TD calls for statements by ministers and outside inquiry 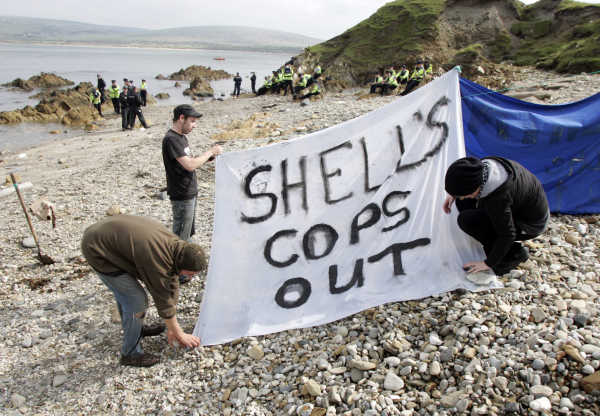 'This is too serious a matter to be left to the Garda themselves to investigate. It may even go beyond the role of the Garda Ombudsman's office to deal with'

ALLEGATIONS of drink being delivered to gardaí on behalf of the Shell multinational for policing its controversial Corrib gas project at Rossport in County Mayo require statements by the Ministers for Justice and Natural Resources as well as “an independent probe to vindicate the reputations of everyone involved in granting Shell its licences from start to finish”, Sinn Féin TD Pádraig Mac Lochlainn has said.

The Sinn Féin TD said the delivery of what has been described in the media as ‘corporate sweeteners’ on behalf of Shell to gardaí policing protests against Shell’s operations – including a delivery of €35,000 of alcohol to Belmullet Garda Station in 2007 – raises serious questions about possible bribery to influence policy or practice by Shell or its agents.

“The accusations contained in the leaked documents and reported widely in the media at the weekend – which names a number of individual members of An Garda Síochána – have the capacity to do massive damage to the credibility and integrity of the force,” Deputy Mac Lochlainn said.

“At the very least there is a prima facie case that the company at the centre of the allegations, through the admissions of its own managers, was involved in a clandestine operation to deliver large quantities of alcohol to members of An Garda Síochána in Mayo and Westmeath at the height of protests against the Corrib gas project.

“If these allegations have any foundation whatsoever then we are dealing with possible corruption of public officials in pursuance of commercial activities.

“This is too serious a matter to be left to the Garda themselves to investigate. It may even go beyond the role of the Garda Ombudsman's office to deal with.”