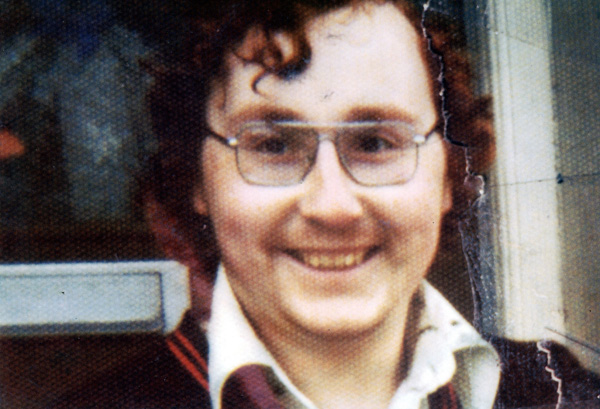 Michael was arrested in September 1976 following an INLA arms raid in County Donegal. He received a 12-year sentence in June 1977. 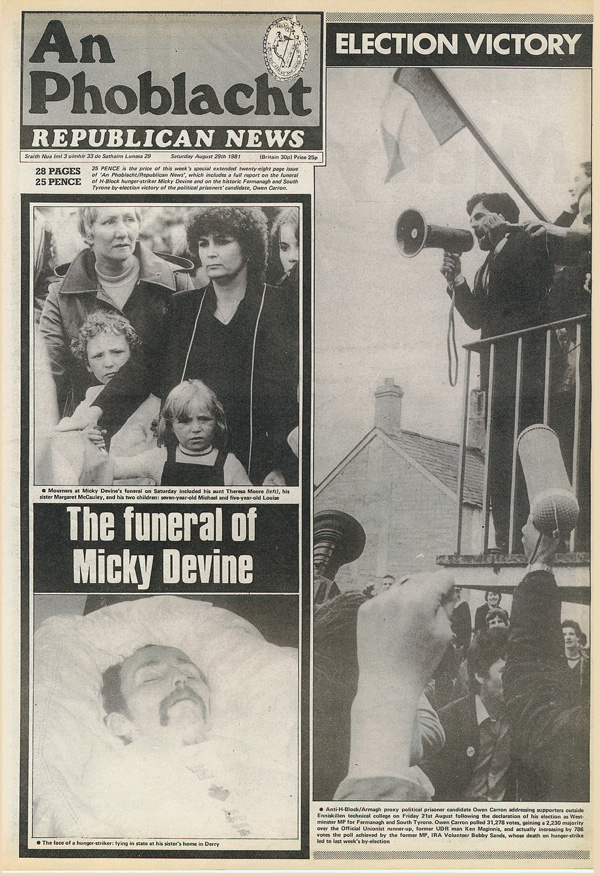 The death of Michael Devine

On the death of INLA Volunteer Michael Devine at 12 minutes to eight on Thursday 20 August 1981, his brother-in-law, Frankie McCauley, said:

“One thinks, ‘Ten men, how many more have to die? We have ours now over us. Next week it will be big Laurence’s people waiting for the same thing. Then the Devlins after that and another boy will go on hunger strike and another. They’ll never break them.’”

Michael Devine was the last of the Hunger Strikers to die in 1981. His funeral took place on Saturday 22 August in his native Derry City, in a grave next to his friend and comrade, Patsy O’Hara, who died the previous May. 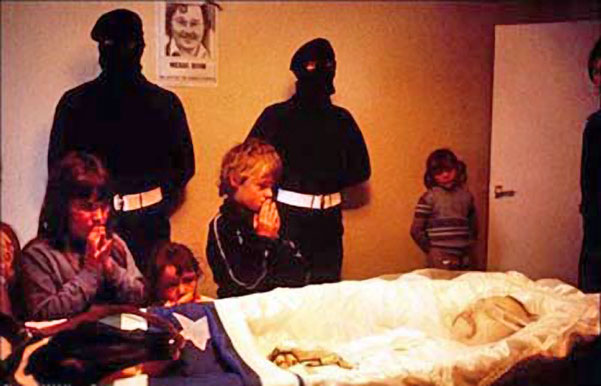 The funeral went from Michael Devine’s sister’s home in Rathkeele Way directly to the cemetery after Requiem Mass in St Mary’s Chapel. People came from many parts of Ireland to attend and a long queue of mourners lined up outside the house to pay their respects. Thousands gathered in the street as the coffin was removed from the house, flanked by an INLA guard of honour, followed by relatives and then representatives of the families of the other Hunger Strikers.

Conversation on the day revolved around the courage and determination of the Hunger Strikers and the wavering attitude of the Irish Government, the SDLP and the Catholic Hierarchy. Another topic of conversation was the election in Fermanagh/South Tyrone after the death of Bobby Sands MP of Owen Carron, who attended the funeral. He was repeatedly mobbed by well-wishers. Three British military helicopters flew overhead. 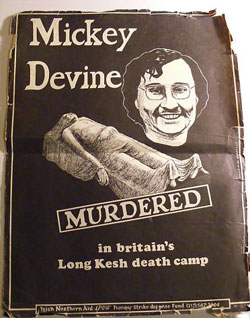 The cortege made its way to the top of the cemetery and to the plot where Michael Devine’s comrade, Patsy O’Hara, was buried three months previously. A piper playing laments was followed by a guard of honour of eight men in uniform. The two leading Volunteers carried the Starry Plough and Tricolour flags, followed by six more carrying semi-automatic short-arms in their belts. Three drummers then marched silently forward. A second guard of honour of 16 men flanked the coffin on the last few yards of its journey.

Margaret McCauley walked behind the coffin with Michael Devine’s two children, Michael (Jnr), aged seven, and Louise, aged five, and Michael’s aunt, Theresa Moore. The coffin was laid on trestles and the firing party stepped forward and delivered three volleys of shots over the remains of their comrade. This salute was greeted with loud applause. Terry Robson chaired the ceremony and praised the deceased Hunger Striker who was the former O/C of the INLA prisoners in the H-Blocks. Wreaths were laid on behalf of all the Hunger Strikers’ families, the INLA, the Irish Republican Socialist Party, the National H-Block/Armagh Committee, the IRA and many others. A girl piper played The H-Block Song and a bugler sounded The Last Post. 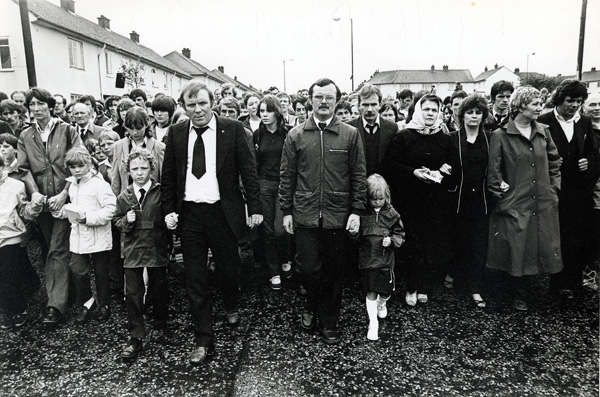 The flags were then removed from the coffin for presentation to Margaret McCauley. “The colours,” Terry Robson said, “include the Starry Plough and the national flag, the Tricolour. It will also include his beret, his gloves and his belt – denoting his rank as an officer in the Irish National Liberation Army.” A statement from the Army Council of the INLA was read out. It said:

“As Officer Commanding our Prisoners of War in the concentration camp at Long Kesh, Michael relentlessly pursued an honourable settlement for the protesting prisoners, not in any elitist disregard for the rights of others but in the full knowledge that his struggle was merely an extension of the same struggle for which he was incarcerated.”

The INLA statement went on to say:

“The creation of the H-Blocks, a development unseen in the history of the sophisticated torture machinery of British imperialism, brought a new unity amongst anti-imperialist organisations and saw a degree of co-operation between people as our nation reacted in horror at what really was going on inside the corrugated and barbed enclosures of Long Kesh.”

The main oration was delivered by Naomi Brennan, Chairperson of the IRSP. She described Michael Devine as “a revolutionary, a soldier, but above all a socialist”. She went on to say that Devine saw from “the reality of everyday life in his native Derry what British imperialism means in Ireland. He saw the long years without hope on the dole. He saw the discrimination and gerrymandering from the fat cats behind the Derry walls, and he liked none of it.” 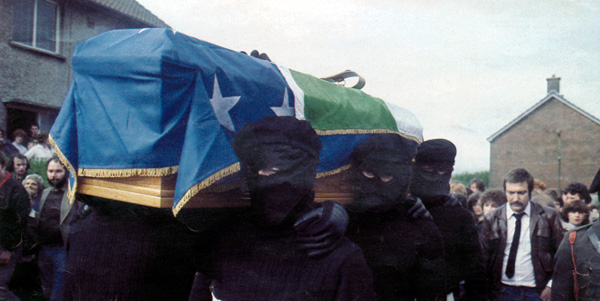 Naomi Brennan said that Michael Devine was only a youngster when the RUC batoned the civil rights protesters off the streets in 1969, adding that the lessons of the period were not lost on him. She said that 1969 was a time when people had at long last found their voice, learned to stand and demand their rights and that “to stand and fight was far better than 50 years of bending the knee”.

She said the prisoners’ five just demands could, and must, be won.

“The hope we have is not in the droppings from this or that British Government, much less from the well-oiled phrases of the SDLP politicians and their likes. No, the hope we have is in the spirit of Michael Devine, unquenchable even in the jaws of death itself.

“While Ireland brings forth young men and women such as him there is hope now and for the future – a certainty that the cause for which Michael Devine gave his young life is just, and is necessary, and we must see it through to the end. And we will.” 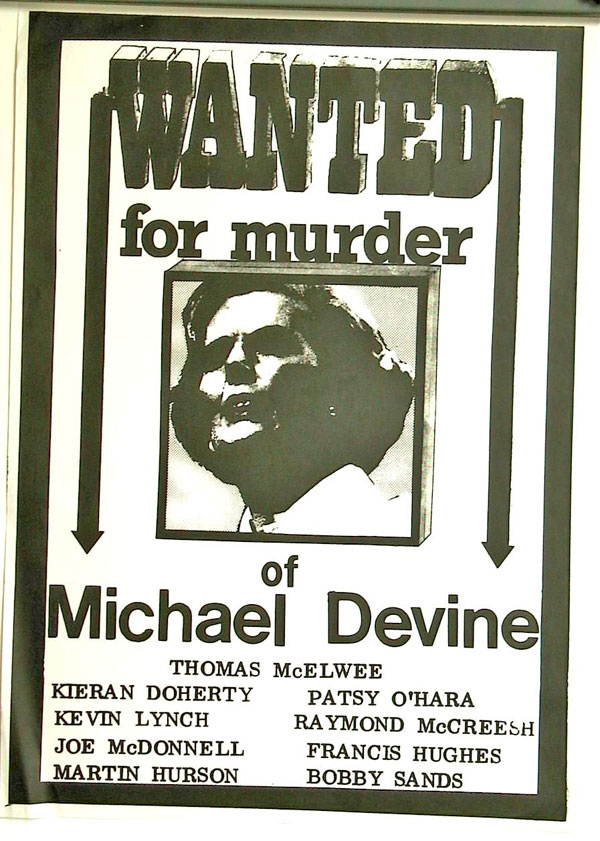