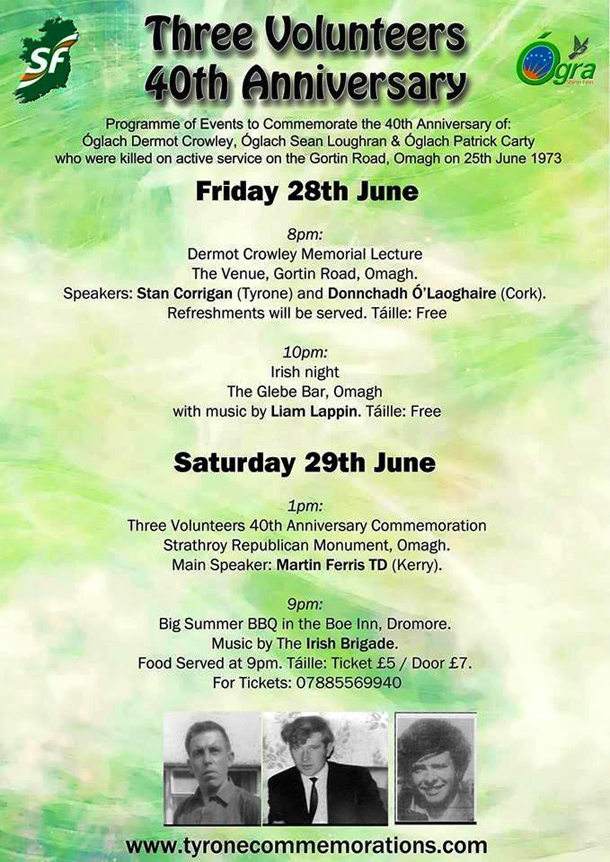 Volunteers Dermot Crowley, Seán Loughran and Patrick Carty died on active service when a bomb they were transporting near Omagh exploded prematurely on 25 June 1973.

EVENTS will be held in Omagh this weekend  to remember three IRA Volunteers who died on active service 40 years ago.

Volunteers Dermot Crowley, Seán Loughran and Patrick Carty died when a bomb they were transporting near Omagh exploded prematurely on 25 June 1973.

18-year-old Dermot Crowley grew up in Mayfield in Cork. One of six children, he was a skilled sportsman and played for Clann Éireann GAA and his county in both juvenile and youth athletics.

The terrible suffering of the nationalist people in the North of Ireland in the early 1970s had a strong effect on Dermot and he joined the IRA with his lifelong friend, Tony Ahern. Dermot was heartbroken when 17-year-old Tony was killed in a landmine explosion in Fermanagh in May 1973. Dermot himself would lose his young life exactly one month later in Omagh. He is buried in Rathcooney, County Cork.

Seán Loughran was from Dungannon in County Tyrone. He was nicknamed 'The Crow' because of his jet-black hair and was remembered for having a wonderful wit and sense of humour.

Seán was a longtime member of the IRA and was interned in the 1950s and 1960s. Upon his release in the 1960s, he married Pauline and moved to England, where the couple had two children.

Unable to watch from abroad as the nationalist people of the Six Counties came under siege, Seán returned home in the 1970s and immediately volunteered for active service. Described by his comrades as “a daring volunteer who played a full role in the struggle”, he died aged 37. He is buried in St Malachy's Graveyard in Edendork.

Patrick Carty was originally from Bundoran in County Donegal but moved with his family to Dungannon in County Tyrone when he was 11.

Patrick joined the IRA after he witnessed two of his friends and a young girl shot and injured by the B-Specials paramilitary police as they took part in a Civil Rights march. In 1972, he escaped from the Curragh Military Camp and returned to active service. His comrades described him as a “fearless young man, modest in manner and above all else a dedicated republican”. At the time of his death, aged 27, he held the distincion of being a wanted man on both sides of the Border.

For more informaton go to www.tyronecommemorations.com