'Hammer of the Sikhs' galloping back to Dublin with Fine Gael 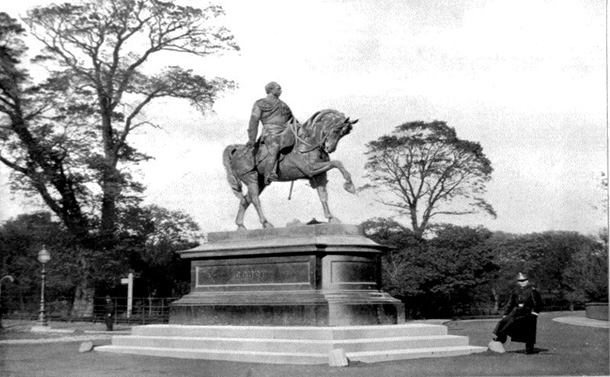 A HUGE STATUE glorifying a British Empire general infamous as 'The Hammer of the Sikhs' for his barbarity in commanding occupation forces in colonial India is set for a return to Dublin if Fine Gael Junior Minister Brian Hayes gets his way.

The statue of Lord Gough, who served as the Commander-in-Chief of British forces in China and India, previously sat in the Phoenix Park in Dublin until he was unseated by a republican bomb in 1957.

The statue was made from cannon captured from Indian forces by Gough's imperial troops. It now sits in a castle in England.

When the statue was first proposed in the 1860s, members of Dublin Corporation were reluctant to commemorate a servant of the British Empire who gained the name 'The Hammer of the Sikhs'. Since then, both John Bruton of Fine Gael and Ruairí Quinn of Labour have had no such qualms and have lobbied in the Dáil for Lord Gough's return.

Office of Public Works Junior Minister Brian Hayes says his department will “actively seek the restoration of the statues of Gough and Carlisle".

The 7th Earl of Carlisle served as the British Empire's Lord Lieutenant of Ireland on two separate occasions in the 1850s and 1860s. Carlisle was also toppled by a republican bomb in 1956.

When An Phoblacht contacted the OPW to ask why he wants to reinstate in an Irish republic a tribute to the British Empire's 'Hammer of the Sikhs', Brian Hayes's private secretary promised a “substantive reply” in due course.