What does the James McClean story say about the poppy, ‘freedom’ and ‘respect’? 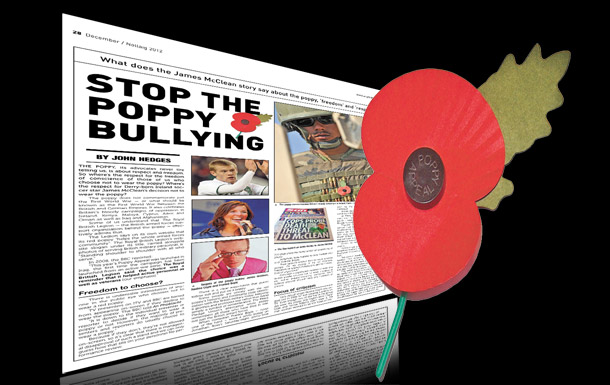 “No person should be forced to wear any symbol. That includes the red poppy. Nor should any disrespect be read into a person’s decision not to wear such a symbol. The right of people not to feel intimidated into wearing a poppy must be recognised.”

The poppy does not commemorate just the First World War — or what should be known as the First World War Between the British and German Empires. It also celebrates Britain’s bloody campaigns of oppression in Ireland, Kenya, Malaya, Cyprus, Aden and Oman as well as Iraq and Afghanistan.

Some of us understand that. The Royal British Legion — the British armed forces support organisation behind the poppy — effectively admits that.

The Legion says on its own website that its red poppy “helps the whole armed forces community”. The Royal British Legion’s website slogan under its title, carried alongside photos of serving British military personnel, is: “Standing shoulder to shoulder with all who serve.”

“This year’s Poppy Appeal was launched in Iraq, the first time the campaign has been launched from an active war zone. The Royal British Legion said the choice was a reminder that it helped active personnel as well as veterans [our emphasis].”

There is undeniable intimidation of anyone in the public eye who chooses not to wear a red poppy.

TV presenters on ITV and BBC are barred from appearing on-screen if they decline to wear the poppy. The BBC told An Phoblacht:

“It is down to the individual presenter or reporter to decide if they want to wear a poppy or not. However, the majority of presenters and reporters do usually choose to wear a poppy.” 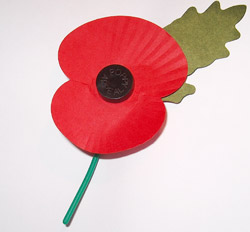 Because if they don’t, they’re not allowed on-screen, so it’s clear that there is managerial disapproval of such a stand and we can only guess how that sits on your personnel file performance review.

There is a clear expectation that guests follow suit and put on a poppy.

Some people are uneasy with the red poppy’s historic and continuing close identification with the British military today, believing it glorifies and promotes war rather than being simply a symbol of remembrance. The Peace Pledge Union’s alternative white poppy remembers all those who have died in war, not just the British armed forces.

When comedian Frankie Boyle — never one of the herd — wore a white poppy on Jonathan Ross’s Saturday-night prime-time ITV chat show he came under an avalanche of abuse.

Jonathan Ross replied to one Twitter critic of Frankie Boyle:

“Free speech entitles him to wear a white poppy. Or no poppy if he so chooses. Freedom of speech means you get to choose. End of argument!”

Although a significant number of even the British public choose not to wear a poppy at all, some poppy-wearing diehards don’t believe anyone should have any freedom of choice.

‘Girls Aloud’ singer Nadine Coyle was singled out in 2008 for not wearing a poppy on TV. Even though two of the five in the group did wear the poppy and English-born Cheryl Cole and Nicola Roberts didn’t wear it, the Irish woman seemed to be the focus of criticism by the likes of DUP MP Gregory Campbell.

James McClean and Nadine Coyle both come from Derry City.

In Derry City in 1972, 14 civil rights marchers — six from McClean’s own Creggan estate — were murdered by British troops on Bloody Sunday.

This year, James McClean asked to wear a normal club shirt rather than one specially embroidered with the Royal British Legion poppy on Remembrance Sunday weekend. The club accepted his request. Manager Martin O’Neill — who is from County Derry and did wear a poppy — said later that it was McClean’s “free choice”.

Others do not respect that freedom of choice.

McClean was subjected on the social and broadcast media to what Derry Sinn Féin MLA Raymond McCartney described as a witch-hunt:

“No person should be forced to wear any symbol. That includes the red poppy. Nor should any disrespect be read into a person’s decision not to wear such a symbol. The right of people not to feel intimidated into wearing a poppy must be recognised.”

This writer has relatives on both sides of his family who served in the British Army and Royal Navy. I don’t wear a poppy. I don’t disrespect them. On a human level, and as a republican, I recognise the personal sacrifices and losses of anyone (civilians and combatants) caught up in conflict, including those who fell in Flanders and British soldiers in Afghanistan today. But I choose not to wear a poppy. I respect the right of people who want to wear the poppy; next year, poppy wearers should respect the right of others not to.