When sport speaks louder than words 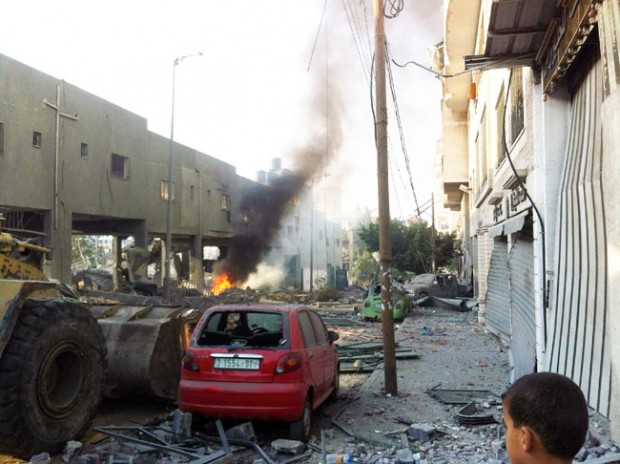 Both sides sustain fatalities . . . but Palestinians ‘die’, Israelis are ‘killed’

MAYBE IT WAS the neon signs which festooned Belfast City Hall. Maybe it was the huge Christmas tree behind the platform. Maybe it was just because it’s one of few seasonal songs to which I know the lyrics.

Whatever the mental cue, a music video for Live Aid’s Feed the World replayed through my mind until I found the words I was looking for :

There’s a world outside your window

And it’s a world of dread and fear

Where the only water flowing

Is the bitter sting of tears

In the crowd where I was standing that night in late November, there was no music playing. The atmosphere was sombre and angry. Several hundred people had gathered in Belfast city centre to protest at the unrelenting onslaught by Israel against the people of Palestine. This was a night when the news carried reports of an imminent ceasefire; of behind the scenes talks; of international figures and Western powers calling for calm. Yet still the Israeli bombardment continued. Unrelenting.

There’s a world outside your window, and it’s a world of dread and fear.

In the previous week, more than 130 Palestinians had been bombed to death by Israel. The apocalyptic scenes received little coverage in the media. In part, that may have been because the Israelis had bombed buildings housing foreign journalists and providing telecommunications for their reports. Of course, some of the news networks have just become so accustomed to the devastation of Palestine by Israel it’s not news any more. But, as Gerry Adams’s Léargas blog (‘A Pause Between Wars’) reiterates, the reality of the war against Palestine by Israel is totally asymmetric. Media coverage of the costs of that war are tilted and tainted the same way

Both sides sustain fatalities . . . but Palestinians ‘die’, Israelis are ‘killed’.

We have faced winters like this before. Only three years ago, the Israelis launched a massive military offensive against the Occupied Territories; 1,300 Palestinians were killed and more than 5,000 were injured. The Israeli onslaught lasted over a three-week period when the attention of many people — and political leaders — was oriented towards the Christmas holidays. The people and the places Israel attacked had already been under siege since the middle of 2007. The Israeli Government built a ‘Berlin Wall’ to create an open prison. 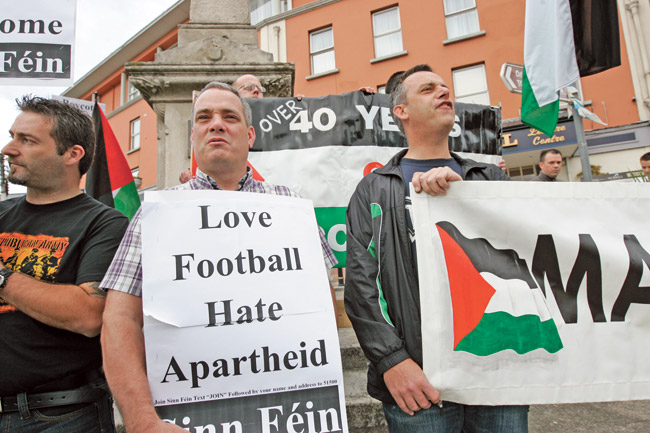 • Protesters, including Sinn Féin’s Aengus Ó Snodaigh TD, before a match between Israel and Ireland in 2010

They have established a blockade off the coast. They have controlled the movement of Palestinians within their own lands. They have a stranglehold on investment, humanitarian aid and vital infrastructure. They even control the water supply.

Where the only water flowing is the bitter sting of tears

Gaza is one and a half miles long. Within it live 1.5million people. Three out of every four of the Palestinians resident in this open confinement are refugees. That includes many who had their homes bulldozed and homelands forcibly confiscated to make way for illegal settlements. The Israeli Government’s strategic objective is to talk peace and make war. Their own euphemism for settlements is “facts on the ground”.

In Ireland, we have had our own experience of this. In Mayo in the late 1800s, Captain Charles Boycott, land agent for a British absentee landlord, was evicting people from their homes and land and assigning the property to others. In response, the Irish Land League organised non-violent protest against those reassigned the homes and lands of those evicted. The protest was so successful that ‘boycott’ became a worldwide concept.

The sporting boycott of South Africa helped to add to the pressure on the apartheid government to end oppression and begin negotiating. A sporting boycott of Israel is an equally important form of non-violent protest which can complement the push for peace. Next year, Israel is scheduled to play two matches in World Cup soccer qualifiers against an Irish team. So let the boycott begin. Let our sport do the talking.