‘This is not about bringing the killers of Robert McCartney to justice. It is in fact the opposite. That was made very clear to the court today.’

THE remanding in custody in Belfast today of Pádraic Wilson on a charge of IRA membership and organising meetings has been described by Sinn Féin’s Policing & Justice spokesperson as “bizarre” and “politically motivated” by elements opposed to changes in the Peace Process. 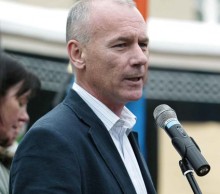 “It is my firm view that these charges are politically motivated and driven by an old agenda within the PSNI fighting against policing change. Those behind this agenda need to be removed from policing before they inflict further damage on the Peace Process. This is not about bringing the killers of Robert McCartney to justice. It is in fact the opposite. That was made very clear to the court today.

“This is a very serious situation and these charges need to be dropped and Pádraic Wilson needs to be released immediately.

“If the PSNI is intent on following this agenda then they may as well arrest every journalist and politician who has met the IRA, the loyalists or any other organisation in the course of the last 40 years.

“Sinn Féin will continue to support Pádraic and his family until this political charade is brought to an end.”