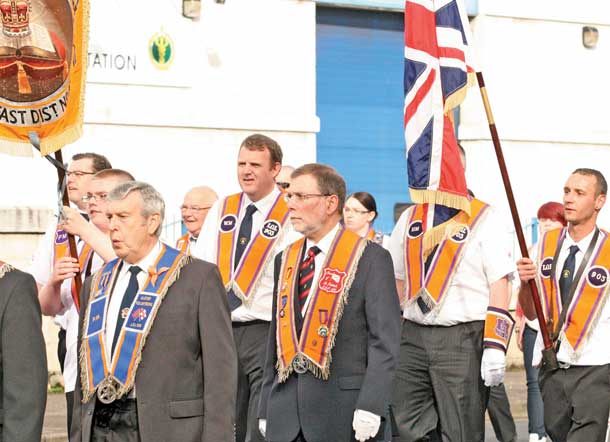 Bizarrely, DUP leader Peter Robinson accused Sinn Féin and the SDLP — not unionist bands, marchers or organisers who refuse to talk to residents — of wanting to raise tensions ahead of the Ulster Covenant Centenary Parade on 29 September.

THE DUP and Ulster Unionist Party rallied round to protect DUP Social Development Minister Nelson McCausland from a censure motion in the Assembly tabled by the SDLP — supported by Sinn Féin and Alliance — seeking his suspension for three months over his attitude to the blatantly sectarian display by a Shankill loyalist band during a Twelfth parade that McCausland had been present at.

The SDLP motion said McCausland had breached his ministerial code of office by failing to condemn loyalist bandsmen for breaching Parades Commission restrictions by playing sectarian tunes at the doors of St Patrick’s Catholic Church in north Belfast.

Bizarrely, DUP leader Peter Robinson accused Sinn Féin and the SDLP — not unionist bands, marchers or organisers who refuse to talk to residents — of wanting to raise tensions ahead of the Ulster Covenant Centenary Parade on 29 September.

“He actually pretended — and he must be the only person in this Assembly who believes it — that the anti-Catholic song, The Famine Song, was some sort of pop song!” (The Famine Song is an anti-Catholic number sung by Glasgow Rangers fans set to the tune of the Beach Boys’ Sloop John B. It has been judged by the Scottish courts as racist.)

In the wake of the actions of the Young Conway Volunteers band, Nelson McCausland told reporters:

“If someone was intending to be provocative or inflammatory, it wasn’t really very provocative. [The church] was just an empty building. There was no one there to be provoked.

“Most of the tunes — in fact, all of tunes I recognised up to that point — were actually pop songs.

“If the band had wanted to be provocative or inflammatory, as they have been described on the BBC and elsewhere, they wouldn’t have waited all that time to play one tune and spent the rest of the time playing pop tunes.”

McCausland rejected the arguments that his behaviour or attitude was in any way wrong or unbecoming a minister. He said:

“I remain focused on working with all sections of the community to deliver a long-term solution to the problems in north Belfast as a local representative and for the whole of Northern Ireland in my role in the Department of Social Development.

“Whether it be socially, economically or politically, I and my colleagues are first and foremost interested in building a community that is peaceful and prosperous and in which sectarian behaviour and violence has no place.”

Sinn Féin repeated its calls for calm and dialogue around contentious parades.

Meanwhile, East Derry Sinn Féin MLA Cathal Ó hOisín said there is no comparison between the antics during the loyal order parades past St Patrick’s Church and that of a republican Hunger Strike commemoration in Dungiven in August:

“In Dungiven, there was no Parades Commission determination because there had been dialogue with all concerned prior to the parade.

“If the loyal orders followed the example set by Dungiven then perhaps we would no longer have issues with the few remaining contentious parades or the recent sectarianism witnessed at St Patrick’s Church.”