The birth of the Ulster Volunteer Force 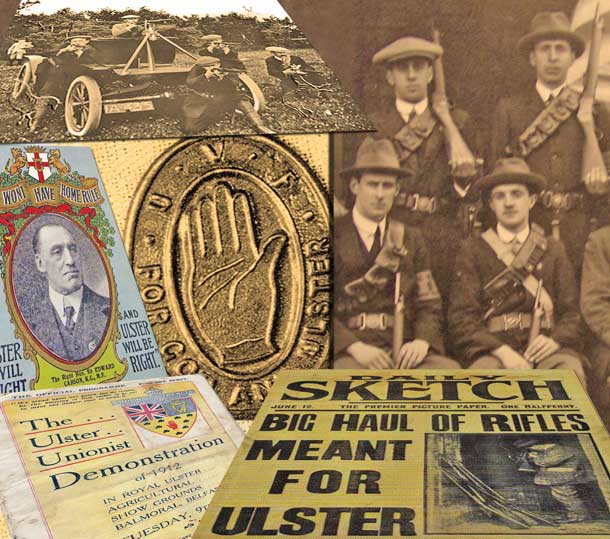 The Ulster Unionist Council established a secret military committee to supervise the establishment of a unionist army; the Orange Order prepared its membership for military training

LOOKING BACK over the three years prior to the signing of that seminal unionist document, the 1912 Ulster Solemn League and Covenant, it becomes clear that a key strategy for the unionist leadership was how to maximise the militancy of the unionist community and assert their control over that militancy.

A core element of this strategy was the development of military structures that would eventually lead to the formation of a unionist army, the Ulster Volunteer Force (UVF). This unionist army – created by the Ulster Unionist Council (UUC) – was formally established at a meeting of the UUC in January 1913.

These clubs channelled the activities of militant unionists into a disciplined organisation. According to their Constitution, the purpose of the clubs was “to defend the legislative union between Great Britain and Ireland” and “to render assistance to their members and others in carrying out that policy”. Their leadership was drawn from the ranks of prominent unionist and Orange leaders. The clubs were prepared to use arms in defence of the link between Ireland and Britain. The first club, founded by the unionist peer Lord Templetown, met at Templepatrick, County Antrim, on 1 January 1893.

Two years after the defeat of the second Home Rule Bill, the leadership of the Unionist Clubs temporarily suspended their activities on 5 September 1895. While they remained inactive until January 1911, the formation of the clubs had created the footprint of a future unionist paramilitary organisation.

In December 1910, the UUC, now confronted by the political crisis surrounding the Parliament Act in the Westminster Parliament, called for the clubs to be reactivated. This Parliament Act, made law in August 1912, restricted the powers of the British House of Lords, creating the prospect of a Home Rule Bill going through parliament and thus removing from the unionists the safeguard against a third Home Rule Bill. At the December meeting, the Council also established a secret military committee to supervise the establishment of a unionist army; in the same period the Orange Order prepared its membership for military training. Colonel RH Wallace, the Grand Master of the Orange Order, wrote in a letter to Orange lodges: “Orangemen must set the example to other unionists by volunteering their services.” Not surprisingly, Orange volunteers played a major part in the creation of this unionist army.

The activities of the clubs and the Orange Order were further bolstered by the words of the unionist leader Edward Carson in his address to thousands of unionists in the grounds of Craigavon, the residence of James Craig MP, on Saturday 23 September 1911:

“We must be prepared, in the event of a Home Rule Bill passing, with such measures as will carry on for ourselves the government of those districts of which we have control. We must be prepared – and the time is precious in these things – the morning Home Rule passes, ourselves to become responsible for the government of the Protestant Province of Ulster.”

By the autumn of 1912, many thousands of unionist volunteers were actively involved in military training

The UUC moved quickly to give political substance to the words of Carson.

At a further meeting, held in the Central Hall in Rosemary Street, Belfast, two days after the Craigavon meeting, delegates from the UUC, the County Grand Orange Lodges and the Unionist Clubs, passed two resolutions which were unanimously adopted.

The first was a “call upon our leaders to take any steps they may consider necessary to resist the establishment of Home Rule in Ireland”.

The second decided “the time has now come when we consider it our imperative duty to make arrangements for the provisional government of Ulster”.

This meeting also appointed a commission of five leading unionists to frame a constitution for a provisional government.

A pivotal development took place in Belfast on 5 January 1912 when Colonel RH Wallace, of the Orange Order, applied to local magistrates in Belfast for permission to engage in basic military training. Wallace had been advised that any two Justices of the Peace (JPs) had the power to authorise drill and other military exercises within the area of their jurisdiction. While Orange volunteers and the Unionist Clubs had been engaged in the drilling and training of their membership in the use of arms since the late months of 1910, much of this training had been secret and illegal. As a result of Wallace’s successful application, Orange volunteers and Unionist Club members were able to drill in public as long as they had the legal authority of two JPs. An outcome of this was an increase in military drilling by Orange volunteers and Unionist Clubs across the nine Northern counties.

On 9 April 1912, Edward Carson and Bonar Law, leader of the British Conservative Party, reviewed Unionist Clubs and Orange Volunteers at the Balmoral Showgrounds in Belfast. In the aftermath of this review, the unionist leadership were preparing to consolidate their opposition to the Third Home Rule Bill, and bind together all elements of unionism by the use of a solemn oath.

In a conversation with James Craig MP, a senior member of the unionist leadership, BWD Montgomery, Secretary of the Ulster Club in Belfast, suggested the use of the Scottish 1643 Solemn League and Covenant as a model for their oath. Thomas Sinclair, a leading member of the UUC and the Unionist Clubs, was tasked with writing the first draft. At a meeting of the Standing Committee of the UUC, held at Craigavon on 19 September 1912, the Covenant was unanimously adopted (the Standing Committee of the UUC was the core management group which directed the policy of the UUC).

From the end of 1910, the UUC, through its membership of the Orange Order and the Unionist Clubs, had taken control of the militarism emerging from inside the unionist communities. By the beginning of 1913, it had decided to combine all unionist volunteers into a single force and under one command structure – to be called the Ulster Volunteer Force.

This decision was formally adopted at a meeting of the UUC in January 1913. In July 1913, retired British Army General Sir George Richardson was appointed Commander-in-Chief of the UVF (his appointment had been suggested by retired Field Marshal Lord Roberts). Within three and a half years, during the imperialist carnage of the First World War, many thousands of these unionist volunteers would die on the Somme battlefield, fighting with the 36th Ulster Division.