Pensioners in the firing line 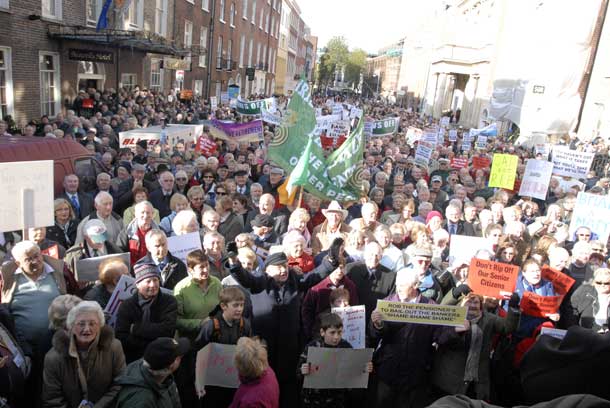 THE Fine Gael/Labour Government is firmly putting pensioners and the elderly in general in the firing line in respect of further social welfare cuts being planned in the next budget.

Irish pensioners won some significant benefits over the years, including reasonable basic pensions, along with free travel, free television licence and fuel and phone allowances.

It should be emphasised, however, that the basic state pension of €230 a week will only allow a pensioner to exist: it provides no cushion for luxuries or other special expenditures, even with the benefits package taken into account.

It should be further emphasised that those in receipt of the contributory pension have, as it says on the tin, CONTRIBUTED to their pension over the years, through PRSI and social insurance payments, together with the taxes paid to provide Government advisers with the education used to advance them to positions where they now demand that pensioners take a cut.

Eamon Gilmore’s Labour Party may play pretend to have ‘clashes’ with Fine Gael on this issue but Joan Burton has not denied that pensioners’ payments and entitlements are in the firing line.

The first steps in this campaign may be modest enough — such as a proposed €5 fee for each proposed long-distance travel — but this will just be the thin end of the wedge.

Already fuel allowances have been reduced, more reductions are on the way, cuts in pensions are planned, and further means tests will eliminate universal entitlements under a spurious claim that the expenditure should be targeted at those who need it.

The point is that the “well-off” pensioners who Minister of State Brian Hayes refers to can be taxed: those who can afford to pay for their own care, can afford, through taxation, to make a contribution to everybody’s. That’s the democratic way.

It is ironic that all of the pensioners’ benefits which Labour are now targeting were brought in by Fianna Fáil governments. Ironic indeed that Labour should take up the discreditable baton of Ernest ‘Shilling Off the Pension’ Blythe and be the party to cut them.

Labour’s excuse is that we have no choice because we don’t have the money. But this is a lie. We seem to have the money to pay the banks, to pour billions into making sure that European speculators don’t lose out.

We could and should take a leaf out of Iceland’s book and put our people before the banks. Iceland refused to pay the foreign banks, rode out their anger, and is now back in the international markets and back to high levels of growth — to the consternation of the IMF and the confusion of those who have no policy but to appease the Euro bosses.

Pensioners are not the only ones being threatened, but a series of softening up articles in the national press – especially by Stephen Collins in The Irish Times – shows that they are in the frontline for the cuts now being planned.

The time to start the fight against this is now, not when the cuts are introduced. And the time for Labour dissidents to make a reality of their opposition to what is going on is now, not after the event when weasel words will be no help to those being pushed further into the black pit of poverty.