Loyal Order marches and what they lead to: 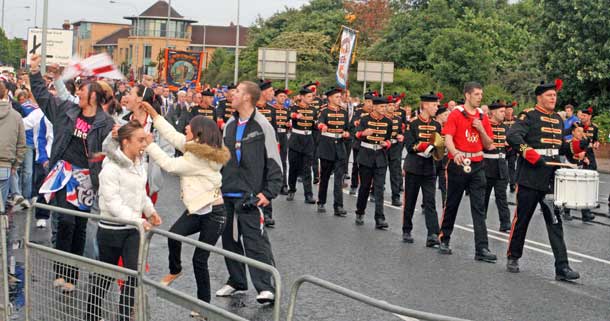 Offensive and sectarian: Parading is more than having the ‘right to parade along the ‘queen’s’ highway’

Sectarianism permeates every facet of society in the North. It is ‘the elephant in the room’ that is ignored because to really analyse it would be to expose unionism and its relentless abuse of power in the years from partition to the collapse of Stormont in 1972.

IT’S CLEAR from the events of the last month in north Belfast that the issue of unionist parading has ratcheted up the levels of tension in the area. And with September’s Ulster Covenant Parade due to take place on Saturday 29 September (as An Phoblacht goes to press), with 20,000 Orange marchers and supporters with more than 100 bands passing St Patrick’s Church on Donegall Street, nationalists were holding their breath.

Having witnessed the sectarian display by the Shankill-based Young Conway Volunteers (YCV) band outside St Patrick’s on the morning of the Twelfth of July and the violent reaction to their peaceful protest outside their chapel on ‘Black Saturday’, residents of Carrickhill have been calling for talks “between all parties” as a way of finding a resolution.

As the tension in north Belfast mounted, it become clear that for unionists the issue of parading is more than having the “right to parade along the ‘queen’s’ highway”.

Is parading for unionists about the exercise of political power?

Is it also for unionists about the social, cultural and religious dominance over the Catholic, nationalist or republican citizens of the Six-County state?

Parading has now become THE expression of unionist dominance over the Irish.

Ironically, as unionists on the one hand demand the ‘right’ to march, they constantly deny that same ‘right’ to nationalists.

The three days of unionist violence that began on Sunday 2 September came about when a UVF-inspired mob attacked the PSNI at Denmark Street on the Lower Shankill Road.

Loyalists had assembled in an attempt to prevent a parade organised by the Republican Network for Unity (RNU) passing along Clifton Street. And while some of those taking part in the RNU parade became involved in rioting, the bulk of the violence was carried out by loyalists.

Indeed, loyalists used concrete saws to cut up masonry for missiles and lobbed petrol bombs at the PSNI, leading North Belfast Sinn Féin assembly member Gerry Kelly to point the finger at both the UDA and UVF. 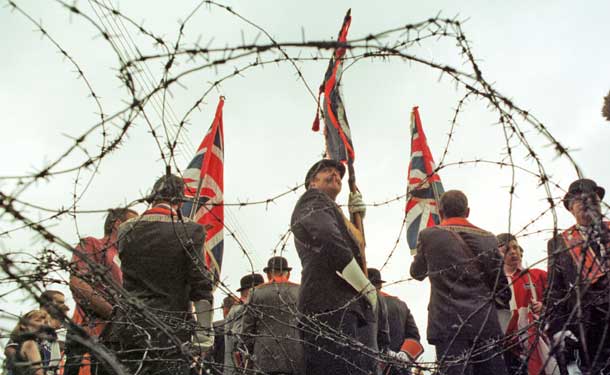 If we look at the events surrounding the situation at St Patrick’s since the Twelfth, we get a snapshot of how unionism is in denial over its responsibility for – and the consequences of – the problems created by Orange marches.

Clearly the actions of the YCV band, stopping to march in circles in front of a prominent Catholic church while playing the anti-Catholic Famine Song was a calculated insult to the church, its priests, parishioners and Catholics generally.

Yet Nelson McCausland, a DUP Assembly member for North Belfast and a minister in the Executive, who saw the display himself, refused to accept the sectarian nature of what occurred. McCausland described the band as “naïve or thoughtless or unwise”. For McCausland, the band’s actions weren’t sectarian and he went on to accuse Sinn Féin of being, “opportunistic” and of exploiting the affair.

And so as ‘Black Saturday’ (when the Royal Black Preceptory marches) approached on 25 August, instead of helping to defuse a volatile situation, the leaders of unionism put their names to an inflammatory public letter demanding the Parades Commission be disbanded.

In an open letter to the then British Secretary of State, Owen Paterson, unionist politicians, led by First Minister Peter Robinson, called for the Parades Commission to be scrapped.

And in typical unionist doublethink and denial of hard evidence in videos and from eyewitnesses and reporters, the letter described the Commission’s decision to bar the YCV band from passing St Patrick’s Church as “monstrous”.

What followed on Saturday 25 August was that the YCV broke the law in defying the Commission’s ruling and marched past St Patrick’s while other bands, also in defiance of the determination, played sectarian music, including The Sash.

And in an example of Orwellian thought control, unionists and Orange Order spokespersons tried to turn what was an episode of sectarian triumphalism into an act of “civil disobedience” aimed at defying the Parades Commission. Orange Order Chaplain Mervyn Gibson said breaking the law was “justifiable”.

Echoing this was the DUP’s Nelson McCausland.

“I could not condemn others because over the years I have engaged in some form of civil disobedience as a protest.”

Both McCausland and Gibson ignored the assault by parades supporters on the PSNI and nationalist protesters.

That the media allows unionists to get away with this doublethink is also an issue.

The unionist daily News Letter editorialised on Monday 20 August for the need to “keep the focus on republican thuggery” while supporting the Orange Order.

Then, on Friday 24 August, it accused the Parades Commission of rewarding republicans and punishing the loyal orders.

This turns the parading paradigm on its head by demonising communities that are invaded year on year.

More importantly, it presents the unionists and the Orange Order as innocent victims of republican aggression.

In its reporting of the Denmark Street rioting, the BBC 24 News said that the rioting broke out “after a republican parade”.

This was patently untrue as the loyalists had gathered at Carlisle Circus and were attacking the PSNI at 2pm, a full hour before the RNU parade was due to set off from the New Lodge area.

In presenting unionist aggression in this way the media, at best, gives it a soft landing; at worst it presents it as justifiable in the face of republican activity.

CRC Chairperson Tony McCusker spoke of sectarianism still being deeply rooted in society. However, the CRC understanding of sectarianism as ‘one side is as bad as the other’ ignores and therefore cannot understand that sectarianism is in the DNA of the Six-County state.

It was in keeping with this sectarian DNA that the Unionist Party wielded power here for over five decades — and it still dictates unionism’s response to Catholic, nationalist and republican aspirations.

The culture of sectarianism permeates every facet of society in the North. It is ‘the elephant in the room’ that is ignored because to really analyse it would be to expose unionism and its relentless abuse of power in the years from partition to the collapse of Stormont in 1972.

As a snapshot of life in the North we see that the culture of sectarianism expresses itself in many ways and in all walks of life.

In February of this year, a Catholic social worker was awarded £60,000 against the Belfast Health Trust as a result of a sustained campaign she faced from work colleagues at the Knockbracken Health Care Park in south Belfast.

Earlier this year, when Ballymartin GAA relocated to Down Council-owned playing fields as their home grounds were being redeveloped, unionists vandalised the pitches, erected Union flags and painted “British” on the goalposts.

Despite four attacks in just two weeks, the club continued to use the pitches near Kilkeel.

Said Ulster Unionist Harold McKee: “The Protestant community have a fear that if the Gaelic posts are up they will be up forever.”

That’s a bit like the recent remarks of the DUP’s William Walker, speaking after Apprentice Boys supporters entered and attacked customers in a bar in Killyleagh, County Down.

Standing the truth on its head, he maintained: “They should have stayed in the pub until the parade went by.” What would the reaction have been in England if this had been said by a councillor about a British National Party or English Defence League parade?

So for unionists the solution to conflict is that we all go back to a pre-1968 ‘Garden of Eden’: the perfect world of unionist one-party rule with the Croppies lying down and knowing their place in the social order.

The ideology of sectarianism is powerful indeed but times have changed. The leaders of modern-day unionism have to lead by a better example. 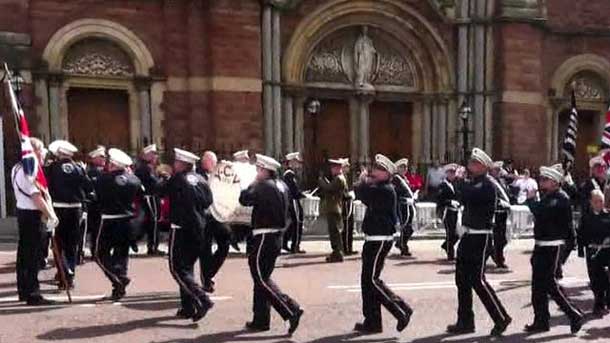