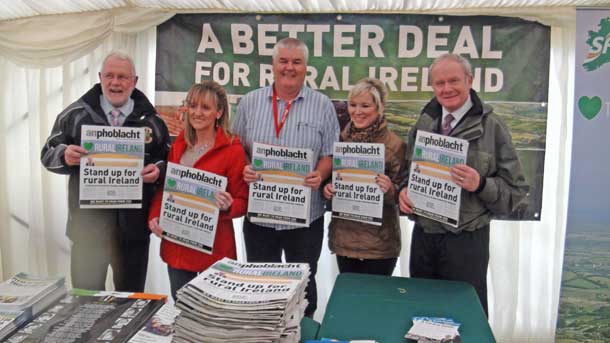 The Fine Gael doctrine of austerity and cuts, bailing out the banks and the bond-holders, and protecting the wealthy has been embraced by Labour, supposedly the inheritors of the mantle of James Connolly.

Sinn Féin is standing up for Ireland — all-Ireland. More importantly, Sinn Féin is standing up for the people of Ireland. This is being reflected not just in opinion polls but in public support for Sinn Féin’s practical policies in the Dáil, the Assembly, the European Parliament and local authorities the length and breadth of Ireland.
The Fine Gael/Labour Government is riven with divisions, mistrust and enmity.
Ministers in key departments like Health aren’t even speaking to each other. Fine Gael Health Minister James Reilly seems to enjoy almost weekly antagonising his Labour Party junior ministers by changing things in their portfolios behind their backs.
And Labour just sucks it up.
Fine Gael Local Government Minister Phil ‘Septic Tank’ Hogan backed the run by Clare County Council bureaucrats to try and link eligibility for education grants to payment of the unfair Household Charge.
And Labour Party Education Minister Ruairí Quinn shamefully endorsed the council coercion before it was hastily dumped (and disowned by the Taoiseach under pressure from Sinn Féin) after a weighty public backlash.
The Fine Gael doctrine of austerity and cuts, bailing out the banks and the bond-holders, and protecting the wealthy has been embraced by Labour, supposedly the inheritors of the mantle of James Connolly.
As Gerry Adams said at the Sinn Féin Ard Fheis this summer:
“What is the point of the Labour Party in this government? What would James Connolly think of the Labour leadership’s implementation of right-wing austerity policies? What would he think of the promises made and broken by the party he founded?”
Tory-style cuts and austerity — whether they are being imposed by the Conservative Party and Liberal Democrats from Westminster, or Fine Gael and Labour from Leinster House — are being resisted by Sinn Fein.
Rather than concentrate on the issues, the Establishment parties and the media (largely owned by wealthy individuals who owe their fortunes to the unregulated free market that has plunged the economy into crisis) try to distract from Sinn Féin’s practical, costed, commonsense policies.
Sinn Féin will not be diverted or distracted. Sinn Féin is for a new republic where the interests of citizens come first. That’s what the pillars of power are really worried about because Sinn Féin is the effective opposition — effective in every sense of the word.