‘COST SAVINGS’ THE WORDS BEING USED TO JUSTIFY UNDERMINING THE LANGUAGE 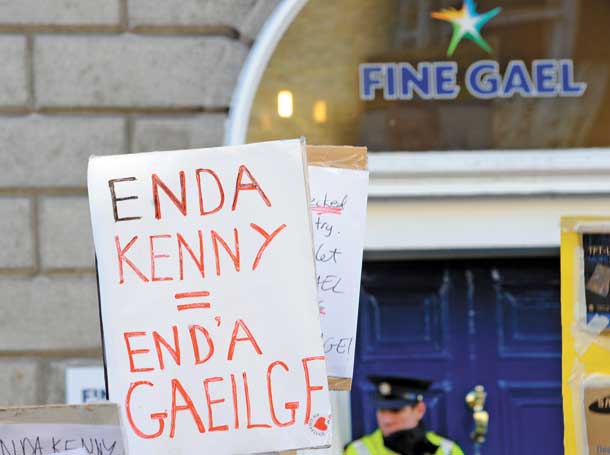 Minister of State Dinny McGinley is proposing that a clear majority of Údarás na Gaeltachta board members be ministerial (i.e. his) appointments

THE Irish language is under a sustained attack at this very moment. Not, however, in the North of Ireland, but in the 26-County state.

Apart from the constant media refrain of hostility and derision to the language and all things Irish — which reflects the disengagement of the Establishment middle class from Irish nationalism — there are four main areas of concern.

Firstly, there is the threat from the Labour Party Minister for Education, Ruairí Quinn, that “too much time” is being spent on teaching Irish in our schools, despite the obvious failure of the current levels and methods of teaching.

This, of course, comes after the now-deferred abolition of the requirement to study Irish at Leaving Cert level as proposed by Taoiseach Enda Kenny.

Secondly, there is the proposed abolition of the Language Commissioner (which handles complaints from Irish speakers concerning the abuse of their rights within the state administration) and its amalgamation with the Ombudsman’s Office.

It is a fact that, notwithstanding certain levels of sympathy within the latter office, it is only with the establishment of the Language Commissioner (and the energetic role played by Seán Ó Cuirreáin as Commissioner) that the issue of rights for Irish speakers has become a reality.

Thirdly, there is the reconstruction of the Board of Údarás na Gaeltachta, with Minister of State Dinny McGinley proposing that a clear majority of board members be ministerial (i.e. his) appointments.

The original agitation waged by Gluaiseacht Chearta na Gaeltachta in the 1960s and 1970s for a Gaeltacht authority was that it would be a democratically elected body. But it was left to Fianna Fáil’s Éamon Ó Cuív to make a reality of that when he expanded the elected character of the Údarás.

Minister McGinley now proposes to get rid of all of that. Údarás elections are to be scrapped entirely; five members are to be nominated by county councils in which there are gaeltachtaí, but in each of which the Gaeltacht is a minority component and all of which are dominated by Fine Gael/Labour; the rest, the majority, are to be directly nominated by the minister (Fine Gael).

These last two measures were proposed by Colm McCarthy’s infamous ‘Bord Snip Nua’ report which reflected middle-class bias against anything and everything Irish on the spurious basis that it would save money.

In fact, the amalgamation of the Language Commissioner with the Ombudsman’s Office will produce only marginal savings on the office rent in Conamara, though it will allow Fine Gael/Labour to claim that they have reduced the number of state bodies even if no significant savings are made.

The reconstruction of Údarás na Gaeltachta will save the cost of an election, but at the price of democracy for the Gaeltacht — an issue of no importance at the dinner parties of middle-class Dublin but of considerable weight in the gaeltachtaí themselves on which the nation depends for the revival of Irish.

And the fourth pillar of this unholy assault are the new proposals in RTÉ to cut back expenditure on Irish-language broadcasting.  RTÉ wants to eliminate Irish from its own schedules and amalgamate them all in an umbrella organisation containing TG4, Raidió na Gaeltachta and RTÉ Nuacht.

RTÉ has in any case consistently under-funded Raidió na Gaeltachta and its pay levels contain a 10% discrimination against RnaG staff.  But there are no proposals to expand the funding of the independent TG4; rather its limited budget is to be stretched to take on the new components.

And this also ignores the fact that Raidió na Gaeltachta’s prime strength is that it is a genuine Gaeltacht-focused service, with over 90% of its staff  being native Irish speakers from the Gaeltacht, while TG4 is more of an Irish-language service than a Gaeltacht service.

At the same time, and with breath-taking hypocrisy, Fine Gael/Labour have endorsed the ‘Twenty-Year Strategy for the Irish Language’ while working in practical terms to undermine every proposal in it.