A year of living positively 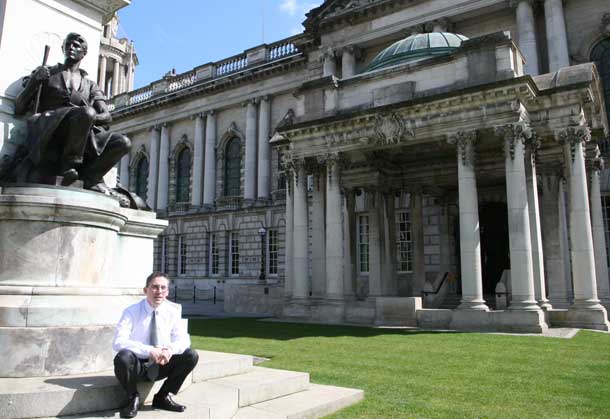 HE WAS Belfast’s youngest-ever Mayor when he was installed as First Citizen in June 2011. Some unionists openly poked fun at him, suggesting he was too immature to do the job properly. (Veteran Progressive Unionist Party Councillor Hugh Smyth quipped: “I have overcoats in the wardrobe that are older.”)

Yet Niall Ó Donnghaile confounded his critics and fulfilled his role as a ‘Mayor for all the people’, with great personal and political dignity, imagination and energy.

On the eve of his term ending (on 1 June), the Short Strand man spoke to An Phoblacht’s PEADAR WHELAN at City Hall about his year in office and the highlights of his term as the public face of one of Ireland’s largest cities.

“The underlying themes of my year in office were to promote the ideals of a republicanism based on an egalitarian worldview,” Niall says.

“I wanted to open the Mayor’s Parlour to the citizens of Belfast as a demonstration of Sinn Féin’s commitment to the needs and aspirations of working-class people,” Niall explains.

He recalls the uproar over his rearrangement in the Mayor’s Parlour of images of the British royal family in favour of the 1916 Proclamation and the United Irishmen.

“It wasn’t a case of me or Sinn Féin showing disrepect; it was more a case of us saying that the trappings of ‘Big House unionism’ and British imperialism don’t serve the interests of ordinary people.”

Niall is at pains to point out that his term of office was also about building on the work begun by Sinn Féin’s Alex Maskey and then Tom Hartley as mayors. As a sign of his determination to “take the next step”, Niall visited the Artability Project in the Shankill Road as his first official engagement as Mayor.

“It was ironic that it was a unionist minister, Michael McGimpsey, who cut their funding and they sought the help of a republican Mayor in their efforts to have that funding restored,” Niall says.

“Meeting unionists was always about a two-way engagement and I took my cue from those I met. I found that the vast majority of unionist people took me at face value.

“Remember, I have been working on the ground in the Short Strand and dealing with unionist politicians and loyalist activists around issues of mutual concern for a long time. So it wasn’t a big change of direction for me to meet them as mayor.

“Having said that, the UVF attacks on the district just two weeks after I took office were difficult. On the one hand we’re trying to work with loyalists on areas of mutual concern and the next thing UVF gangs are attacking the area.

“But we got through that and within days I was on the Lower Newtownards Road when President McAleese visited.”

One blip was the controversy over Niall’s decision not to present an award to a British Army cadet.

“I didn’t set out to offend the young girl or her family and I tried to find a compromise on the night but some unionists gave it to the media and they ran with it.

“And I have to say there was a degree of misinformation attached to the whole thing which heightened tensions at the time. It is also fair to say that some unionists and media commentators were intent on making mischief out of the matter to keep a story going.”

Summing up what were the highlights of his year Niall points to the positive effects of the MTV Awards ceremony which were held in the city, his trip to the United States to promote Belfast, and his attendance at the Presbyterian Church’s General Assembly.

“I particularly enjoyed the events I was involved in to promote the Irish language, especially my visit to the Irish class in the East Belfast Mission.”

The big thing he is really proud of is fulfilling his key commitments to raising the issues of teen mental health and suicide. The hosting of the ‘Celebrating Life — Ag Ceiliúradh an tSaoil’ conference on suicide awareness in City Hall in April was a particular success and flagship event. “I just hope it has an impact on people and on an issue that has devastated people’s lives,” says Niall.

Niall smiles at the memory of the skeptics who made smart comments about whether he was old enough to carry out the role as First Citizen of Belfast.

“I challenged them to come9 back to me after my year in office and tell me whether I had a positive impact or not,” he recalls. “My guess is that they would have to answer in the positive.”