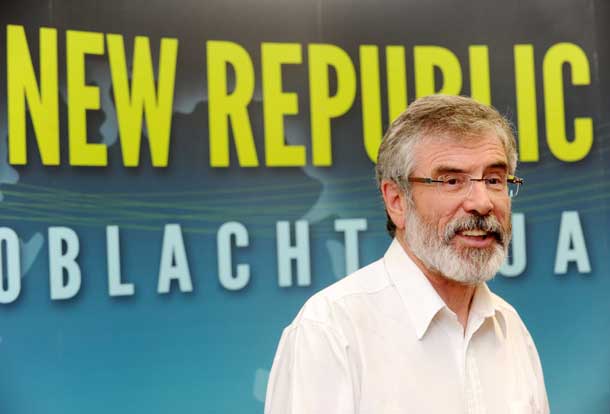 Gerry Adams: ‘A clear expression of Sinn Féin’s desire to engage with our unionist neighbours’

This week’s meeting is a clear expression of Sinn Féin’s desire to engage with our unionist neighbours and to demonstrate that we are prepared, once again, to go beyond the rhetoric as we seek to persuade them that our new Ireland will not be a cold house for unionists or any other section of our people

GERRY ADAMS spoke at the West Belfast Sinn Féin Convention in the Felons’ Club that selected ex-prisoner Rosie McCorley as a replacement MLA for Paul Maskey MP on 24 June. Coming just three days before the meeting of joint First Ministers Martin McGuinness and Peter Robinson and President of Ireland Michael D Higgins with the English monarch at a Co-Operation Ireland initiative in Belfast, Gerry Adams said: “This is a different visit [to Dublin last year] - in a different context.”

“I would like to especially thank the relatives of dead IRA Volunteers and the relatives of those killed by Britain’s armed forces and loyalist organisations for the generous way they have responded to this initiative.

“My experience over the last 20 years of the peace process is that many of the relatives of those who lost loved ones in the conflict are the most considerate, the most willing and the most understanding when republicans have had to make difficult decisions to consolidate peace and open up new phases of struggle to bring the people of this island closer together.

“As an Irish republican party, our core republican beliefs are rooted in the ethos and philosophy of Wolfe Tone and the United Irish Society, who sought the unity of Catholics, Protestants and Dissenters.

“Republicans are in the business of nation building. We want to see a real republic shaped on our island.

“A new agreed Ireland based on the rights of citizens is needed to achieve this.

“We acknowledge the British queen’s place in the hearts and minds and sentiments of the unionist community, though as republicans we do not subscribe to the idea of royalty and monarchy.

“This meeting is therefore a meeting of equals.

“Last year, Queen Elizabeth II visited Dublin. Sinn Féin declined to participate. That was exactly the right decision. That visit marked a rapprochement in relations between that state and the British monarchy.

“That was a good thing. It took 100 years to achieve. In the course of her visit, the Queen of England made some important gestures and remarks, including an acknowledgement of the pain of all victims, which demonstrate the beginning of a new understanding and acceptance of the realities of past.

“I welcomed that at the time and said it should be built upon.

“This week’s meeting is a clear expression of Sinn Féin’s desire to engage with our unionist neighbours and to demonstrate that we are prepared, once again, to go beyond the rhetoric as we seek to persuade them that our new Ireland will not be a cold house for unionists or any other section of our people.

“Our Protestant neighbours also have a proud history of progressive and radical thinking which many of them may not be conscious of. The founders of Irish republicanism were mainly Protestant. They were for the emancipation of their Catholic neighbours and for equality. The fall of the Bastille was celebrated in this city and Thomas Paine’s The Rights of Man was widely read. This is a history which should be reclaimed by the people of the Shankill and Sandy Row, by the Protestants of County Down and Antrim.

“Republicans are democrats and the new republic we seek is pluralist – now and in the future. It is ‘An Ireland of Equals’ in which there is space for everyone and for all opinions and identities.

“Sinn Féin is for a new dispensation in which a citizen can be Irish and unionist, where one can also claim Britishness and be comfortable on this island. It is an Ireland which would in a real and inclusive way live up to the ideals of the 1916 Proclamation and cherish all the children of the nation equally.

“Our vision of a New Republic is one in which the Orange and Green unite in a cordial union.

“I ask all Sinn Féin members and all republicans to support this initiative. I urge everyone, everywhere on this island to take ownership of our future.

“By our actions, Irish republicans will be judged, as well as our beliefs.”