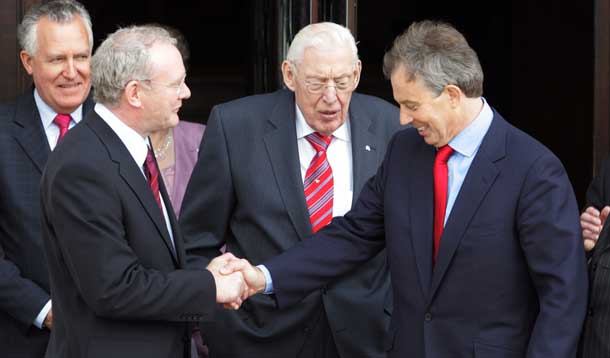 Republican leaders met and spoke to the real power-brokers in Britain, Government heads, in 1972 and since 1994 after the IRA cessation. They met them as leaders of a proud and confident community that has come through hell

I AM PROUD to live in a nation known throughout the world as ‘a land of welcomes’. This meeting, from our point of view, is a meeting of equals. The British queen remains British and the queen the morning after this historic handshake, just as Martin remains an Irish republican committed to ending the Crown’s involvement – or, more accurately, the British Government’s involvement – in Ireland.

We acknowledge her place in the hearts and minds and sentiments of the unionist community, though as republicans we obviously do not subscribe to the idea of royalty and monarchy.

Republicans seek to settle the bedevilled relationships in Ireland which have emerged and resonate today from our shared history. Our interest is in protecting an evolving process of reconciliation between us and unionists as equals, and that interest trumps any reservations we have. This, amongst other things, is a matter for leadership.

This meeting is therefore a meeting of equals. Republican leaders met and spoke to the real power-brokers in Britain, Government heads, in 1972 and since 1994 after the IRA cessation. They met them as leaders of a proud and confident community that has come through hell.

Our community suffered heavily under British rule, in the name of the British queen – even if it was just titular. We viewed the use of her visit by the British Government during her Silver Jubilee in 1977 as a trail of triumphalism over us and what we had come through.

We responded in that context.

In 1977, the Blanket Protest in the prisons was a year old and, against anyone’s predictions, was to evolve into a hunger strike that left ten men dead, with profound, lasting and resonating powers on the future of the 32 counties of Ireland, on our immediate responses as republicans and on our decisions.

Winston Churchill, in the wake of the ending of the First World War, spoke about Fermanagh and Tyrone as if the people and not British Government policy were the problem He said:

“Great empires have been overturned. The whole map of Europe has been changed . . . But as the deluge subsides and the waters fall short, we see the dreary steeples of Fermanagh and Tyrone emerging once again. The integrity of their quarrel is one of the few institutions that has been unaltered in the cataclysm which has swept the world.”

He was right in this regard: to be at peace we need to be one; he was wrong in this regard: his country’s interference in our affairs has corrupted our sense of unity and well-being.

It has fractured the national unity and partitioned the country.

Another great historical figure, Bobby Sands, put it this way. When we have total peace, when we are free, free as we are, imperfectly, today but free from outside interference, it is then, he said, that we shall witness “the laughter of our children”.

As Gerry Adams said at the West Belfast Sinn Féin selection convention to select Rosie McCorley as MLA for the area:

“What a prize. What an objective. The peace and happiness and laughter of the next generation, of children from the Shankill in Belfast to the Shankill in Dublin, living in Ireland as equals, as common people with a rich and shared local, national and international history who are comfortable in their skin as human beings, living in the land of welcomes.”

We need, as best we can and to the best of our ability, to address and deal with as many of the barriers or impediments to this as is possible. We need to attempt to clear the way to that conversation, to seek to persuade and to be open to persuasion on the basis of sound arguments on any issue.

This initiative is a significant contribution to that.