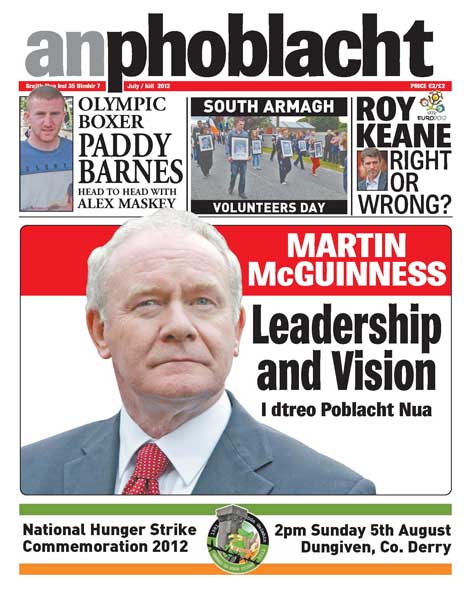 THE Sinn Féin Ard Chomhairle decided that deputy First Minister Martin McGuinness should accept an invitation by Co-Operation Ireland to attend an engagement in Belfast also attended by Úachtarán na hÉireann, the Queen of England and First Minister Peter Robinson. The engagement was not connected to the queen’s jubilee events.

Sinn Féin activists the length and breadth of Ireland attended up to 40 meetings in the immediate run-up to the Ard Chomhairle meeting. In advance of the decision, Sinn Féin also met families of many of the republican patriot dead and those who have been victims of British state violence. This engagement process continues.

The decision was taken in the interests of conflict resolution, national reconciliation and republican national objectives.

This decision was always going to be a big call for republicans. So many of our citizens have been hurt as a result of British rule in Ireland, not least over the last 40 years. Some people have spoken out against the decision and will protest. That is their right and Sinn Féin fully respects that.

Sinn Féin has a vision of a better Ireland, a united and independent Ireland, a real republic built in the interests of all our citizens. That republic cannot be built without the input of our unionist countrymen and women.

The decision reflects a confident, dynamic, forward-looking Sinn Féin demonstrating our genuine desire to embrace our unionist neighbours. It reflects the equality and parity of esteem arrangements that are now in place and that development has been broadly welcomed right across Ireland.

Martin McGuinness is deputy First Minister for all the people in the North, unionists as well as nationalists and republicans. This is a commitment he takes very seriously.

Sinn Féin acknowledges the attachment that many unionists feel towards the Queen of England.

We see this engagement very much in the context of nation building, of overcoming the historic fracture between ‘Catholic, Protestant and Dissenter’. We want to see the coming together of Orange and Green in harmony.

The type of Ireland Irish republicans seek to create is pluralist and where a citizen can be Irish and unionist.

But the real significance and value of this engagement will only be realised if it is built upon. Hopefully, it can contribute towards creating space for those progressive elements within unionism to come forward.

It is also important that both governments build upon this engagement by implementing all outstanding commitments from the Peace Process and chart a new relationship between Ireland and Britain based on equality and mutual respect for the first time.