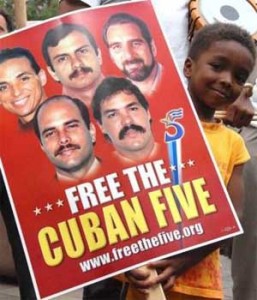 'The Cuban 5 went to infiltrate these terrorist groups. They were unarmed and simply reporting on their activities'

A CALL has gone out for more people in Ireland to become active to ‘Free the Cuban 5’, the five men jailed in the United States for monitoring right-wing exiles plotting terrorist acts against the Caribbean island.

In September 1998, five men – Gerardo Hernandez, Ramón Labañino, Fernando Gonzalez, Antonio Guerrero and René Gonzalez – were arrested by the FBI in Miami and accused of conspiracy to commit espionage. The five had been sent to Miami by the Cuban Government to report on the activities of Florida-based terrorist gangs operating against the Cuban Government.

Since 1959, these groups and others have carried out thousands of acts of terrorism, leaving more than 3,400 people dead and thousands wounded. Less than a year before the arrest of the Cuban 5, these gangs killed an Italian tourist and wounded a dozen other people when they bombed the Hotel Copacabana in Havana. These and other attacks on hotels in the 1990s were aimed at destroying the tourist trade in the country.

Bernie Dwyer highlighted the irony of the US Government imprisoning and locking-up anti-terrorist officers who were attempting to disrupt terrorist activities being planned from US soil.

“The US Government was doing very little about these acts of terrorism being planned in their territory and in some cases the individuals were being financed and trained by the CIA," Bernie said. "So the group of five went to infiltrate these groups. They were unarmed and simply reporting on their activities.”

The five were sentenced to a total of four life sentences plus 77 years. They have been imprisoned in five separate maximum-security prisons spread across the US. Their sentences were later reduced after the UN Working Group on Arbitrary Detention ruled that their imprisonment violated Article 14 of the International Convention on Civil and Political Liberties.

Bernie Dwyer said most Americans were unaware of the plight of these men, claiming that some journalists from mainstream US newspapers were paid by US Government sources to write what she described as “scurrilous articles” about them. Dwyer also called on more people to become involved in the ‘Free the Cuban 5 Campaign Ireland’ saying: “If anything is going to happen, it will only happen if there is a groundswell in public opinion for their release.”

Pádraig Mac Lochlainn spoke on the wider issue of Cuba and the ongoing economic blockade of the country by the US, which he described as “an outrage”. “The international community want the blockade to end and want Cuba to have a chance to breathe,” he said.

He went on to describe the ongoing imprisonment of four of the men as a disgrace. “Here we have five men who went to Florida to protect their people from terrorism, and this is real terrorism, right-wing terrorism, which is directed at people who have built an equal state and taken out a dirty, rotten regime.”

The Free the Cuban 5 Campaign Ireland has called on people in Ireland to get active on the issue and is looking for activists who are willing to help out in any way. The campaign can be contacted by emailing [email protected] and regular updates can be found on their Facebook page: ‘Free the Cuban Five Campaign Ireland’. 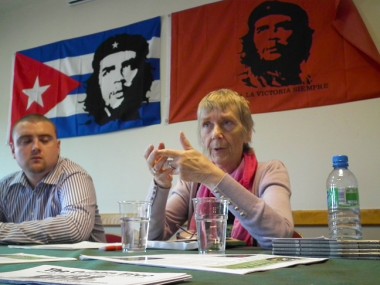 ANTI-CUBA terrorists are suspected of the firebombing of the Airline Brokers’ offices in Coral Gables, Florida, on 27 April, the first anniversary of the death of terrorist ringleader Orlando Bosch.

Bosch and his CORU group have been responsible for hundreds of bombings and attacks across Cuba, the Caribbean and Miami, including the bombing of Cubana Flight 455 in October 1976 in which 78 people died.